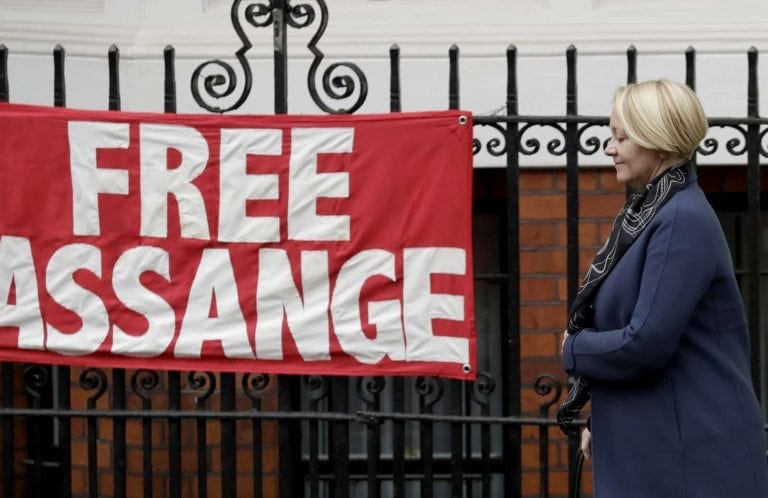 Swedish prosecutor Ingrid Isgren passes a banner put up by a supporter of Wikileaks founder Julian Assange as she walks to a vehicle, on the second day at the Ecuadorian embassy in London, Tuesday, Nov. 15, 2016.  The whole thing has been a sordid charade demonstrating the corruption and vassalage of Sweden and other onetime sovereign Scandinavian nations, along with much of Western Europe.

[dropcap]I[/dropcap]n Sweden, prosecutors have applied to the Swedish courts to issue a warrant for Julian’s arrest. There is a tremendous back story to that simple statement.The European Arrest Warrant must be issued from one country to another by a judicial authority. The original Swedish request for Assange’s extradition was not issued by any court, but simply by the prosecutor. This was particularly strange, as the Chief Prosecutor of Stockholm had initially closed the case after deciding there was no case to answer, and then another, highly politically motivated, prosecutor had reopened the case and issued a European Arrest Warrant, without going to any judge for confirmation.

Assange’s initial appeal up to the UK Supreme Court was in large part based on the fact that the warrant did not come from a judge but from a prosecutor, and that was not a judicial authority. I have no doubt that, if any other person in the UK had been the accused, the British courts would not have accepted the warrant from a prosecutor. The incredible and open bias of the courts against Assange has been evident since day 1. My contention is borne out by the fact that, immediately after Assange lost his case against the warrant in the Supreme Court, the British government changed the law to specify that future warrants must be from a judge and not a prosecutor. That is just one of the incredible facts about the Assange case that the mainstream media has hidden from the general public.The judgement against Assange in the UK Supreme Court on the point of whether the Swedish Prosecutor constituted a “judicial authority” hinged on a completely unprecedented and frankly incredible piece of reasoning. Lord Phillips concluded that in the English text of the EWA treaty “judicial authority” could not include the Swedish prosecutor, but that in the French version “autorite judiciaire” could include the Swedish prosecutor. The two texts having equal validity, Lord Phillips decided to prefer the French language text over the English language text, an absolutely stunning decision as the UK negotiators could be presumed to have been working from the English text, as could UK ministers and parliament when they ratified the decision.

I am not making this up – you will find Phillips amazing bit of linguistic gymnastics here on page 9 para 21 of his judgement. Again, it is impossible that this would have been done to anybody but Julian Assange; and had it been the outcry from the MSM against the preference given to French wording and thus French legal tradition would have been deafening. But given the state’s unhidden animus against Assange, it all was passed quietly with the law simply amended immediately thereafter to stop it happening to anybody else.

The law having been changed, this time the Swedes have to do it properly and actually go to a court to issue a warrant. That is what is now happening. As usual, the Guardian today cannot resist the temptation to tell an outright lie about what is happening.

The main headline is completely untrue. Sweden has not filed a request for arrest. Sweden is going through its judicial processes – which it skipped the first time – in order to decide whether or not to file a request for arrest. This gives Assange the opportunity to start the process of fighting the allegations, which he strenuously denies, in the Swedish courts. However at present his Swedish lawyer cannot access him in Belmarsh high security jail, which is typical of the abuses of process to which he is subject.

It is not political correctness which prevents the UK mainstream media from investigating the extraordinary nature of the allegations against Assange in Sweden. In the case of Nafissatou Diallo, for example, the entire UK mainstream media had no compunction whatsoever in publishing the name of the alleged victim from the very first moment of the allegations against DSK, and the likelihood or otherwise of the entire story was raked through in detail by every single national newspaper, and extensively by the BBC. 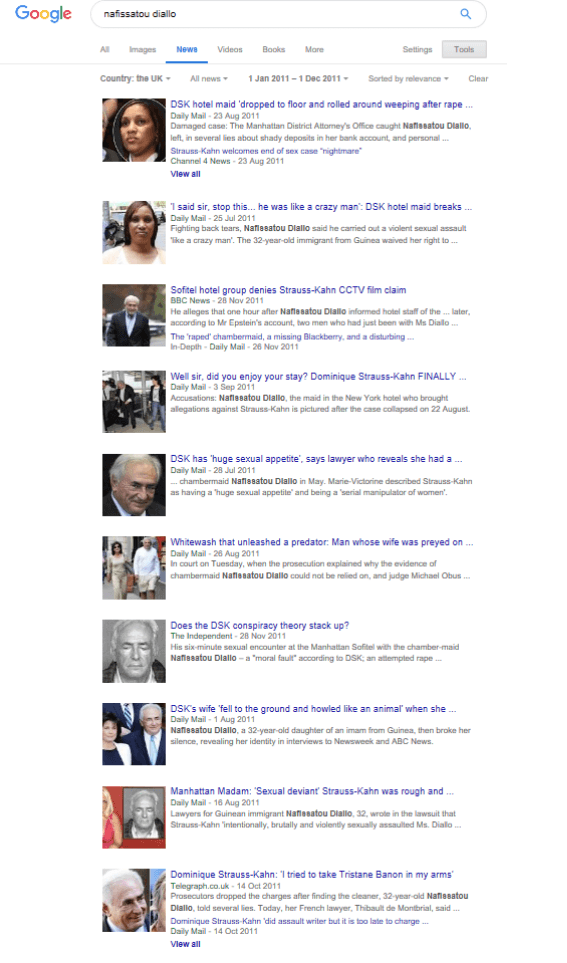 I have never heard anybody even attempt to explain why it was OK for the MSM to look in detail at Diallo’s accusations and use her name, but Anna Ardin and Sofia Wilen must never be named and their story must never be doubted. The answer is not the position in Swedish law – the Swedish law states that neither the accuser nor the accused may be named, which law has been gleefully broken in Assange’s case every day for nine years. When it comes to Assange, he is simply to be reviled. He is provably treated differently by both state and MSM at all points. It does not matter to them that his arrest warrant was not from a judge, or that the media apply entirely different rules to investigating his case, enforced by a feminist mantra they do not believe or uphold in other cases. He is simply to be hated without question.

Why has there never been a documentary in the UK like the brilliant “Sex, Lies and Julian Assange” from the Australian Broadcasting Corporation’s flagship Four Corners programme? Please do watch if you have not done so already:

Julian Assange revolutionised publishing by bringing the public direct access to massive amounts of raw material showing secrets the government wished to hide. By giving the public this direct access he cut out the filtering and mediating role of the journalistic and political classes. Contrast, for example, the Panama Papers which, contrary to promises, only ever saw less than 2% of the raw material published and where major western companies and individuals were completely protected from revelation because of the use of MSM intermediaries. Or compare Wikileaks to the Snowden files, the vast majority of which have now been buried and will never be revealed, after foolishly being entrusted to the Guardian and the Intercept. Assange cut out the intermediary role of the mediating journalist and, by allowing the people to see the truth about how they are governed, played a major role in undercutting public confidence in the political establishment that exploits them.

There is an interesting parallel with the reaction to the work of Reformation scholars in translating the Bible into vernacular languages and giving the populace direct access to its contents, without the mediating filters of the priestly class. Such developments will always provoke extraordinary venom from those whose position is threatened. I see a historical parallel between Julian Assange and William Tyndale in this respect. It is something worth bearing in mind in trying to understand the depth of the State’s hatred of Julian.

Subscriptions to keep this blog going are gratefully received.

ABOUT THE AUTHOR
Craig John Murray is a British former diplomat turned political activist, human rights campaigner, blogger and whistleblower. Between 2002 and 2004, he was the British ambassador to Uzbekistan during which he exposed the human rights violations of the Karimov administration.

Russia Grinds Out Wins In Europe

The Yellow Vests of France: Six Months of Struggle