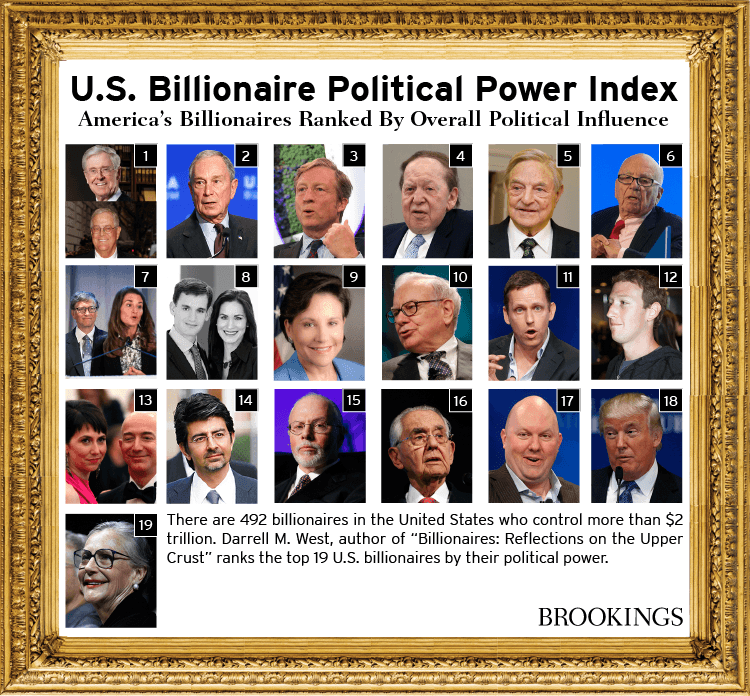 Charles and David Koch, whose fortune is rooted in oil, lead the pack of plutocratic tyrants leading the US and the world to a miserable end.

The divide and conquer tactics practiced by minority ruling powers are simply age-old class divisions forced on their majority subjects, but they have become more dangerous as imperial capitalism has entered a most critical period threatening more destruction than ever before. At a time when real global democracy is both more possible and necessary than ever, humanity is split into more sub-divisions than ever, with economic stratification disguised by group identity labels, most totally and a-scientifically as separate races. That is the way authority wants it and why it must be overcome before capitalism's self-destructive roots become total reality and unity is finally achieved only to experience devastation with the belated realization that it is happening to all of us and not just some of us.

The extreme emergency for the human race that has been given the brand name “climate change” and is a result of the compulsive over consumption exercised by perverse market forces under the control of minority private profiteering has been turned over to that same malevolent force for an alleged solution to the problem. This is like solving the problem of humans reduced to renting their bodies for sex by putting pimps in charge of the process. And further assuring that there will be no solution that doesn’t procure more private profits, the professional sex workers seeking liberation will be put into separate groups according to skin tones, religions, sexual sub-categories and any other measures of division to assure that they will not operate as a group confronting the same problems, no matter their alleged differences in how, where and under what circumstances the problems occur.

The threat to humanity’s future by what is called climate change, originating in the nineteenth century at early stages of industrial capitalism and sited as long term danger to humanity by many at the time, has become far more obvious as the fossil fuel-carbon based economic engine of profit has spread further and farther than its European origins to represent a major threat to the future of the human race. This has made minority ruling power created divisions of the majority more important than ever, because in the past it only had to deal with rebellions in one nation at a time even if global philosophy was at their root, but now that capitalism has become a truly and obviously global system the opposition is also worldwide. But most important in the divisions created among us is the diabolically fictional and totally anti-scientific allegations of racial difference that exist to obscure our primary differences which are among economic classes.

The only biological difference in the human race is between male and female and no matter the alleged identity group diversity, humans have had and continue to have no problem at all at mating, pro-creating, or just having recreational sex with one another across all alleged and artificial divides of nations, religions or ethnicity. Tall, short, rotund and thin humans are not separate races except to the tragically misinformed or propaganda barraged believers and the same is true for skin tones and language /cultural differences. All of us have to eat, need clothing and shelter, and are having growing difficulty acquiring these life supports. And as the rich get richer and richer and the world’s population grows poorer as a result, the rumblings of discontent are growing. They need to become an all consuming desire and collective action to transform the environment, both locally but planetary as well, to one that reverses social value systems to first support the public good, and then – and only then - any notion of private profit.

Class society must take precedence over all other subdivisions or things will continue to get better for a relative handful of humans, no matter how allegedly diverse they supposedly are, while it disintegrates physically, socially, spiritually and psychologically, for a growing majority. That majority is vastly more diverse both in numbers and ratios to those enjoying the fruits of private profit growth and over consumption that finds hundred of thousands living in luxury, even if mostly unpaid for and piling up in debt, while hundreds of millions are involved in struggles for survival. These grow more difficult as nature is destroyed for the benefit of a small group doing quite well with war, poverty, injustice, and all the ramifications of imperial power exercised to benefit a small segment of our people, at the expense of the entire planet and the overwhelming majority of our population.

While a tiny minority of a few thousand billionaires exercise power and control over more than seven billion people and the entire global system, the multitudes are propagandized into thinking that generosity and philanthropy on their part will ultimately enrich us all and create a better world. Religious belief may be an opiate for the people, as Marx called it, in order to make an often painful reality tolerable, but human revolution in the material world is the only thing that will bring about a reality that enriches life for all of us and not just some of us, a shrinking group getting wealthier by the second as humanity grows poorer and more endangered in the same time frame.

Relying on rich people to endow colleges and museums, build hospitals, create housing and more, while assuring them massive tax deductions for their generosity, has gone beyond the tolerable and like all else that passes for reality, amounts to accepting individual acts of decency that create social acts of degeneracy in perpetuating rather than ending the system that makes such acts necessary. Even when a billionaire “of color”, to use presently acceptable racist language, pays the student loans of a graduating class at a men’s university of “people of color”, the injustice of economic class is revealed though hardly noticed. The privileged minority that can attend college, in the case of this gift to a privileged sector of the population deemed under-privileged in popular conception, does not benefit the largest group of the community but a minority already beyond the norm for even being able to get the loans to attend. A majority of Americans do not get near a college or university, no matter their skin tones, unless they are making deliveries or cleaning toilets or constructing a new gym or frat house. Did the billionaire practice his generosity by, say, offering to pay the rent of all the “people of color” tenants at a housing project, for a full year? Thereby freeing them far more than the exultant students who would and will certainly be relieved of a sometime staggering financial burden, but as nothing by comparison to the burdens of living in reality working class or near poverty with a future offering more possibility of entering an institution of penal punishment than an institution of higher education? Again and as always, real economic class trumps false alleged race, as it does and will continue to do until we leave our submissive and competing groups and become what we truly are; a race of humans who will not have much of a future, if any, if we do not rise up and create a democracy that works for all of us, and only then allows us to perform at our highest levels within a society of peacefully cooperating individuals, rather than continuing to our possible doom as violently competing near animals.

Frank Scott is founding editor of legalienate.blogspot.com. He lives in Richmond, California.

Inside the Yellow Vests: What the Western media will not report (Part 2) [Images, Video & Text]

Wasting Food in Biblical Proportions: Or How a...