Home CAPITALISM & SOCIALISM Serving the Empire & NOT the People!!

Serving the Empire & NOT the People!!

Eric Holder , former Attorney General under President Obama, was being interviewed by that 'bulldog' of a tv host Chris Cuomo on his CNN  show ( where he earns the ' Blue Collar ' compensation package of at least $ 4 million (1) ). Holder was commenting on this new field of Democratic presidential hopefuls, and of course the fact that he, Holder, had been contemplating a run himself. Holder has a track record, not unlike many others who left government service to earn big bucks in the private sector, that is shady at best. After he left the Clinton Justice Dep't around the turn of the century, Holder was gobbled up by the law firm of Covington and Burling, who happened to represent ( defend ) Wall Street predatory firms. Holder did his job so well that when Obama assumed power he was recruited to be Attorney General . Here is investigative journalist Matt Taibi in 2015 on the ' Democracy Now' show:

MATT TAIBBI: Yeah, I mean, I think this is probably the single biggest example of the revolving door that we’ve ever had. And we’ve had some whoppers in our past. I think previously the worst one was probably Louisiana Congressman Billy Tauzin leaving Congress and taking a $2-million-a-year job with PhRMA, right after he helped pass the prescription drug benefit bill. But what Holder just did just blows Tauzin away. I mean, he spent six years essentially guiding all of these Wall Street firms, which many of them are clients of this company that he’s now working for—he guided them all back to profitability. He allowed bankers to escape prosecution. And now he’s going right back to that firm, where he’s going to enjoy a very lucrative partnership, whether he ever works again, you know, for the rest of his life. 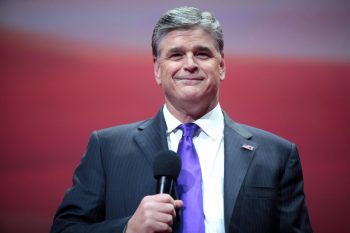 Hannity: Life is good. It always is if you are making $36MM every year, and then who knows what else. (Gage Skidmore)

Let's not single out Mr. Holder please. He is just a ' raindrop in the ocean of empire's servants'. What about those (so called) news talk shows that many working stiffs rely on for their up to date info. Well, right wing ' bulldog ' Sean Hannity of Fox  earns $ 36 million a year to represent all those  ' Make America Great Again ' viewers who frequent his show. In the ( so called) middle of political news talk, CNN, nice guy Anderson Cooper earns $ 12 million. (His net worth is also close to $130MM, as heir to the Vanderbilt fortune). On the (so called) ' Left'  MSNBC network, Rachel Maddow earns $ 7 million and Joe Scarborough $ 6 million. Now, these four ' titans ' of political understanding earn mega millions more through their book deals and speaking engagements. Why not? This is America... oh sorry, Amerika, where the more you suck up to the uber rich you too can become uber rich.

One has to admire tough talking politicians like VP Mike Pence, always banging the drum for military assaults on sovereign nations. White haired Mike ( how long has he had that beautiful coiffure of snow?) was 30 or 31 in 1991 when Bush Sr. rang the alarm to stop the ' Butcher of Baghdad ' . Why didn't flag waving Mike join up to fight the good fight? How about men like Paul Ryan, who could have done ditto in 2002 when we were ready to stop that butcher again? Then we come to this latest yuppie presidential hopeful, Mayor Pete Buttigieg, who just had his Town Hall Meeting last evening. Mayor Pete was asked by a member of the audience about his thoughts concerning the so called ( illegal and immoral ) Iraq War. Pete so eloquently mentioned that he was in college then and protested against our going into Iraq. He said he still feels that way. Then his bio states that he served as a Naval intelligence ensign in Bagram , Afghanistan for all of six months in 2014 after having joined  the Naval Reserves in 2009. Oh, and earlier in the broadcast he did acknowledge that since his youth he always had this desire or dream to be president. What better way to pad one's resume than to show military service? Come on! Anyone who saw through the lies and illegal and unconscionable immoral acts of invading and occupying Afghanistan and  Iraq would NEVER then join up!!

Terry Reed, a former CIA spook, wrote a book in 1994 Compromised: Clinton , Bush and the CIA about his experiences with the drugs for arms enterprise that centered around Mena Arkansas in the late 1980s. He relates in his book how he sat in at a covert meeting between then Governor Clinton and none other than Oliver North, whereupon the Governor was promised that his career would take off if he kept allowing the enterprise to continue shipping cocaine into Arkansas and arms for the Contras to be reflown out. Is this hearsay or is this truth? Investigate and make one's own decisions. Just remember that a few short years later, nationally unknown Governor William Jefferson Clinton became the Deep State's next front man. Much like his successor, Bush Junior, who had his daddy pull strings to get him into the Air National Guard and out of ever serving in ' The Shit' AKA Vietnam. Sadly, the rot just continues to saturate our republic.

What do ALL of the aforementioned people have in common? Folks, it has always been and always will be about Da Money! Why do so many of our fellow Amerikans sit back and love this great country of ours and then allow the uber rich to rule us? This is not the trumpeting for what many want in a Revolution. Not at all. The majority of us, even those with college and graduate degrees, are so ' dumbed down' when it comes to our real history as an empire. Dissent must come in the form of first educating millions upon millions of working stiffs about why things are as they now are. Not an easy task, indeed. Yet, for those out there who reject the boob tube **** and seek information elsewhere, that is a great first step.

(1) Cuomo is reported to have a net worth of approximately $9 MM, while his official TV host salary at CNN is listed at $2.5MM, but again, like most of his ilk, he receives other perks which remain clouded in undisclosed contractual clauses.