An entire month has passed since the Trump administration started moving dangerously toward war with Iran — and Thomas Friedman, the leading foreign affairs columnist at the most influential newspaper in the world, has not published a single word about the crisis. Friedman, the star New York Times opinion writer, is demonstrating intellectual cowardice of the highest order. 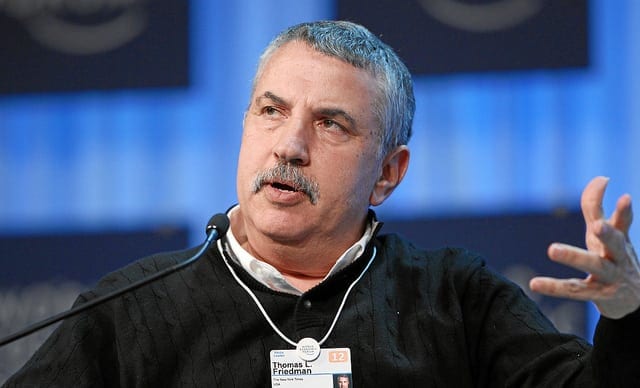 Friedman: as repugnant a media vermin as they come, but high on a perch on the New York Times.

Friedman made his name in the 1980s as a reporter in the Middle East; his first book was called From Beirut to Jerusalem (1989), and he has not been shy about sharing his opinions about the region since then. After the September 11 attacks, he was all over the airwaves, presenting himself as a longtime expert who could explain the Mideast to frightened Americans. Next, he notoriously championed the disastrous U.S. invasion of Iraq in 2003, arguably the greatest foreign policy failure in our history. He sputtered incoherently in 2014 after Isis seized control of vast swaths of Iraq and Syria, but he at least put his opinions in print. Most recently, he embarrassed himself again by fawning over Saudi Arabia’s murderous Crown Prince, Mohammed bin Salman, who went on to order the vicious murder of dissident journalist Jamal Khashoggi in Istanbul.

But now, Thomas Friedman is silent. All the other mainstream opinion leaders have already spoken up; even the conservative Economist ran a cover story nearly a month ago, along with an editorial warning that the U.S. bellicosity was based on falsehoods and risked war with Iran. But Friedman’s four columns since then have said nothing.

Why is Thomas Friedman afraid to write about the rising danger of war with Iran? Fear of being wrong? But he has plenty of practice in that area, although he may not want to add to his losing streak.

Here’s just one angle Friedman might follow. Gareth Porter, the longtime independent investigative journalist, just the other day documented in Slatehow the Pentagon is trying to slip phony evidence into its justification for sending another 1500 U.S. troops to the Mideast, raising the risk of an accident that could provoke an awful conflict. (Friedman surely remembers that when he was stationed in Israel in 1988 an American warship accidentally shot down a civilian Iranian airliner, killing all 290 people on board.)

Or: Friedman could use his decades of connections with Israeli high officials to dig into how Benjamin Netanyahu is feeding the Trump administration false intelligence about Iran’s activities in the region; the Israel link is an angle the rest of the mainstream U.S. media has downplayed.

This is a stretch, but Friedman might even tell his readers that he learned from his disastrous support of the 2003 Iraq invasion, and explain that all the genuine experts agree a U.S. war with Iran would be an even bigger tragedy. So far, unlike other pundits, he has yet to apologize for Iraq.

Back in 2005, New York magazine reported that the New York Times paid Friedman $300,000 a year for his column, plus he was getting $40,000 per speech. How can he in good conscience cash his paycheck when he is not even trying to do the job they pay him to do?

Other posts by James North.

ABOUT THE AUTHOR
James North is a Mondoweiss Editor-at-Large, and has reported from Africa, Latin America, and Asia for four decades. He lives in New York City.