The conflict U.S. President Donald Trump ignited by leaving the nuclear deal with Iran is escalating on multiple fronts. U.S. sanctions on Iranian im- and exports are devastating its economy. A new tanker war is brewing. Iran will soon exceed limits set under the nuclear agreement. While this is not a legal breach of the deal, the Trump administration will loudly denounce it as such.  Iran is also pushing European countries to fulfill their commitment as signatories of the nuclear deal. It today announced what steps it might take should the EU be unwilling to do its part. 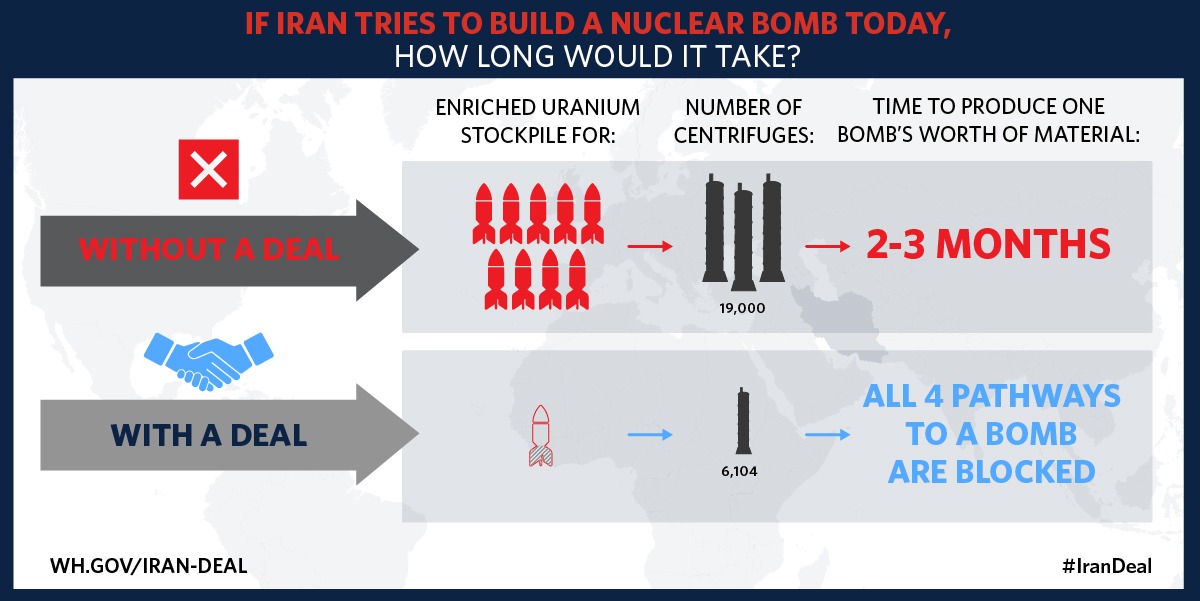 The deal, the Joint Comprehensive Plan of Action or JCPOA, acknowledged Iran's right to enrich uranium for nuclear fuel and to produce heavy water, a moderator needed for certain types of nuclear reactors. The deal limits the amounts of these products Iran is allowed to stockpile.

As Iran wanted to continue the production it was clear that the stockpiles for both products would grow above the limit. It was therefore agreed that Iran would export everything above the set limits as well as all newly produced enriched Uranium and heavy water.

Part of Iran's stockpile of heavy water, which is also used in other industrial processes, was sold to the United States. Additionally produced heavy water was regularly either sold or sent to Oman to be stockpiled there until the conversion of Iran's nuclear reactor in Arak, which will use that heavy water, is completed.

When the Trump administration left the nuclear agreement a year ago it renewed sanctions on Iran's nuclear program. But it also issued waivers for the export of heavy water and enriched uranium. Iran continued to sell these products or to stockpile them outside of the country.

On May 3 2019 the State Department announced that it would no longer issue these waivers:

[A]ny involvement in transferring enriched uranium out of Iran in exchange for natural uranium will now be exposed to sanctions. The United States has been clear that Iran must stop all proliferation-sensitive activities, including uranium enrichment, and we will not accept actions that support the continuation of such enrichment.We will also no longer permit the storage for Iran of heavy water it has produced in excess of current limits; any such heavy water must not be made available to Iran in any fashion.

This step by the Trump administration was obviously designed to bring Iran into breach of the nuclear agreement.

As Iran could no longer export the products it had to decide to either stop producing them or to breach the stockpile limit. The nuclear deal (JCPOA) acknowledges that Iran has the explicit right to enrich. Moreover it was only after the Obama administration conceded that Iran had such a natural right, that the JCPOA negotiations began. It was that concession, not sanctions, that brought Iran to the negotiation table.

Iran is therefore not willing to give up enrichment. It is its natural right under the non-proliferation treaty and is at the core of JCPOA. Nor is Iran willing to give up its production of heavy water. It will need large amounts to bring the Arak reactor online and has to produce those in advance.

The utterly foreseeable consequence of the State Department decision was thereby that Iran would breach both limits the JCPOA set for those stockpiles.

Despite that U.S. journalists speak of an Iranian "threat" to exceed those limits. 'Western' reporting fails to point this out that the illegal U.S. sanction regime caused the breach.

Iran, which is under strong economic pressure and wants the conflict resolved as soon as possible, tried to hasten that moment. It increased the enriched uranium production rate and today announced that the stockpile limit for enriched uranium will be reached in ten days:

The spokesman for the Atomic Energy Organization of Iran says the country will surpass the uranium stockpile limit set under the nuclear deal from June 27."Today the countdown to pass the 300 kilograms reserve of enriched uranium has started and in 10 days time we will pass this limit," Behrouz Kamalvandi told reporters at the Arak Heavy Water Reactor Facility Monday.

"This is based on the Articles 26 and 36 of the (nuclear deal), and will be reversed once other parties live up to their commitments," he added.

Article 26 of the JCPOA (pdf) reserves the right for Iran to "cease performing its commitments" should other parties of the agreement re-introduce sanctions. Article 36 is part of the Dispute Resolution Mechanism in the agreement that gives Iran a similar right.

Iran is not in breach of the nuclear agreement by temporarily exceeding these technical limits. But we can expect that the Trump administration will claim exactly that. It has already done so over other issues even as it is the one party that has no legal standing to do so.

Iran also announced that it may soon take additional steps, like enriching at higher levels, should the European signatories of the nuclear deal not be willing to organize unfettered trade with Iran. The European countries are currently under threat of U.S. sanction should they do so, but certainly have the means to counter those. Iran pushes them to finally do it:

Tehran has said it may go even further by July 8 unless remaining partners to the deal -- Britain, China, France, Germany and Russia -- help it circumvent US sanctions and especially enable it to sell its oil.Kamalvandi said there is still time for European countries to save the Joint Comprehensive Plan of Action (JCPOA), as the nuclear deal is officially known.

"Iran's reserves are every day increasing at a more rapid rate. And if it is important for them (Europe) to safeguard the accord, they should make their best efforts... As soon as they carry out their commitments, things will naturally go back to their original state."

It is now on the Europeans to acts. If they do not fulfill their commitments under the JCPOA, Iran will step by step go back to do what it did before that agreement was signed.

It has no other choice. The U.S. sanctioned Iranian oil exports. While it at first allowed for waivers to certain countries it has now revoked them. It also sanctions Iran's iron, steel, aluminum and copper exports. Ten days ago it sanction the export of petrochemical products from Iran. Additional sanctions were placed on financial transactions with Iran and on its airlines. Imports into Iran also become more and more difficult as many companies fear that they will be hit by U.S. sanctions should they sell their products to companies in Iran.

It is on the European governments to shield their companies from any threat of U.S. sanctions. This could easily be done by a counter threat to U.S. companies.

The U.S. buys more goods from Europe than it sells to Europe. But it sells many more services to Europe than Europe sells to the United States. Google and Facebook make tens of billions per year by selling advertisement space to European entities. The EU could easily block that business. This would also help to create European alternatives to those monopolies. Large U.S. consulting businesses and banks make very profitable deals with European companies. Are we sure they are following all EU regulations? Maybe its time to take a more diligent look at them.

The EU is a large market than the U.S. It certainly has ways and means to counter any U.S. threat. As a signatory of the JCPOA it is up to the EU to hold up that agreement. It just needs the will to do that.

No, its not true. The problem is banking. European banks would not be able to stand up if they lost access to US dollar clearing. They would fail very quickly without official support.

https://www.mintpressnews.com/international-watchdog-finds-israel-has-nearly-100-nuclear-weapons/259274/“During a speech last August in front of the Dimona nuclear reactor in the Negev Desert, Israeli Prime Minister Benjamin Netanyahu threatened to use nuclear weapons to “wipe out” Israel’s enemies. More recently, Netanyahu and his allies in the U.S. accused Iran of seeking to develop nuclear weapons, despite the fact that intelligence agencies of both the U.S. and Israel have long recognized that Iran has no such program.”Need I say more. Case closed.

Angela and Emanuelle and EU are going to suddenly and jointly grow a spine? Is that even possible?

thanks b.. you lay it out well and show why the usa is the guilty party here too... but as harry @1 says - the problem has to do with banking and a financial system that is beholden to the usa/us$... until this changes, it is unlikely europe will change its stripes... there is not a chance the uk will..they are slavishly devoted to all things us-israel..

Iran does not want nukes. Over a hundred Iranian statements, consistently over decades, denouncing nukes as inhuman and ineffective here.

"We do not believe in nuclear weapons, period. It goes against the whole grain of humanity...I think the politicians who are after atomic bombs or are testing them, making them -- politically they are backward, [mentally] retarded." Ahmadinejad