Clearly, the cliques of American criminals are not considering that the "nuclear obliteration" of North Korea would also afflict South Korea, China, and Japan, for starters, as no one can control radioactive vectors.

Written and edited by "b", Moon of Alabama's Editor in Chief.

Today is the 69th anniversary of the Korea War. The war has not ended. It is the U.S. that rejects to sign a peace treaty. The continued state of war is the reason why North Korea acquired nuclear weapons and the means to deliver them.

To turn North Korea back into a non-nuclear state necessitates an end of the war, a peace treaty, and security guarantees.

But could the U.S. be relied on even when a peace treaty is signed? Or is it inherently too bellicose to ever be trusted?

When North Korea's leader Kim Jong Un will read this report, he will likely conclude that the later question must be answered in the affirmative:

More than a third of Americans would support a preemptive nuclear strike on North Korea if that country tested a long-range missile capable of reaching the United States, new research has found, even if that preemptive strike killed a million civilians.  The survey of 3,000 Americans was conducted by the Bulletin of the Atomic Scientists and British research firm YouGov, and asked people to consider a scenario in which North Korea had tested a long-range missile and the U.S. government was considering how to respond.

The survey question is a bit weird as North Korea already tested a "long-range missile capable of reaching the United States".

Fortunately not all Americans are brutes:

Most did not want their government to launch a preemptive strike, but a large minority supported such a strike, whether by conventional or nuclear weapons.“For many of these hawks, support for an attack, even in a preventive war, does not significantly decrease when the story says that the United States would use nuclear weapons that are expected to kill 1 million North Korean civilians,” the report found.

“As we have previously found, the U.S. public exhibits only limited aversion to nuclear weapons use and a shocking willingness to support the killing of enemy civilians.”

The use of a nuclear weapon against North Korea would have even higher support after it happened:

They were also asked whether they would “approve” of such a strike if the president ordered it.People would “rally around the flag,” the survey found: while 33 percent of the public would prefer a nuclear strike that would kill 15,000 North Korean civilians, 50 percent said they would approve if one took place.

It is not astonishing that many of these people are so called 'conservatives':

Republicans expressed greater support for military strikes than Democrats, and Trump supporters voiced even stronger approval: a majority of them preferred a military strike in five of the six scenarios described in the survey.Among supporters of the death penalty, support for a nuclear strike actually rose from 38 percent to 49 percent when the number of expected North Korean fatalities increased from 15,000 to 1.1 million; one such respondent explained that “it’s our best chance of eliminating the North Koreans.”

It would require a nuclear bomb with a 1 megaton TNT equvilent to create a million dead in Pyongyan. The city would be totally destroyed. 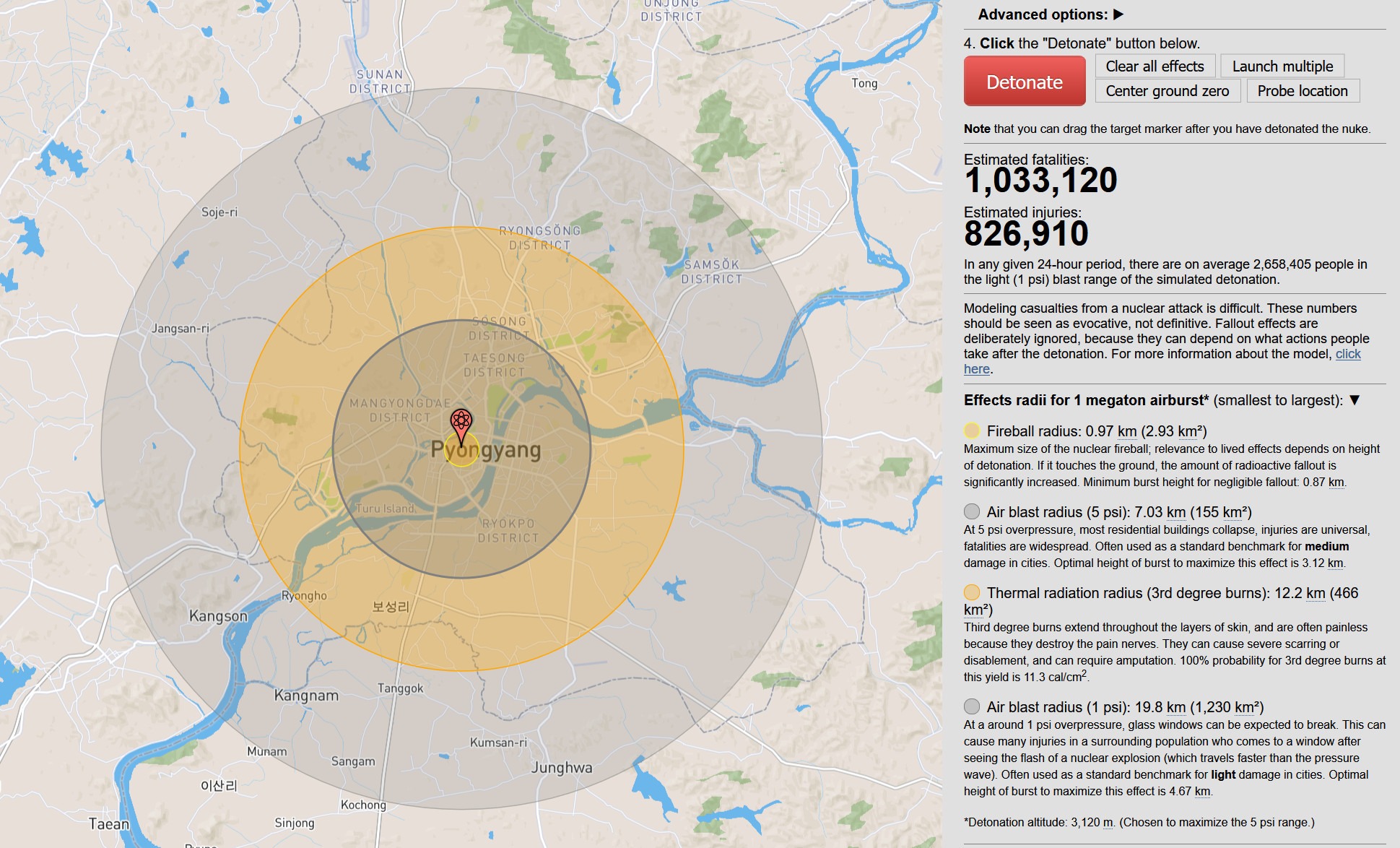 Estimate via Nukemap
More than twenty five million people live in North Korea. Those U.S. citizens who were surveyed and support to strike them, seem to believe that the North Korean survivors of a preventive strike could not or would not retaliate.

They of course can and would do that. The U.S. ballistic missile defense does not work. It would not stop a North Korean missile targeting Seattle, Washington DC or anything between those cities.

With a deeply disturbed Donald Trump in the White House, who's supporters would support him using nukes, Kim Jong Un will of course conclude that North Korea will have to keep ts deterrent. Other countries will think of building their own.

A detailed discussion of the survey and its results is here.