Miriam Adelson wishes for the Book of Trump in the Bible 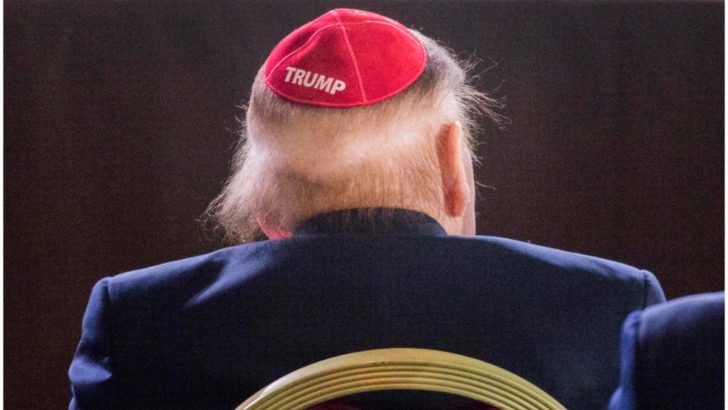 Sheldon Adelson, chairman and CEO of Las Vegas Sands, listens while Donald J. Trump speaks during the annual Republican Jewish Coalition conference, April 6, 2019 . Trump, like all opportunist US politicians has made sure the Jewish lobby is on his side, plus he has a recalcitrant zionist in the family: Jared Kushner, husband of Ivanka Trump, herself a convert to Judaism. (Jeff Scheid/the Nevada Independent)

Miriam Adelson, the wealthiest Israeli in the world, sings the praises of Donald Trump, even suggesting that he belongs in the Bible. Why is that?

On June 27th, Miriam Adelson, billionaire wife of billionaire Sheldon Adelson, proposed that the story of Donald Trump, hero and patriot, ought to be added to the Bible. Her op-ed, entitled “A Time of Miracles,” appeared in the Israeli daily Israel Hayom – a paper which, coincidentally, her husband owns and she publishes.

Ms. Adelson’s article likened the US-Israel relationship to a marriage that “has suffered the occasional rough patches” but has ultimately “deepened and flourished, thanks to shared values and destiny.” ($134 billion over the course of 70 years does tend to have a deepening effect on a relationship.)

“The Book of Trump”? A stunning proposition indeed. One can’t help but wonder where it came from.

In the context of a Trump presidency, everything is for sale. The Adelsons have already shopped the White House for some big ticket items. 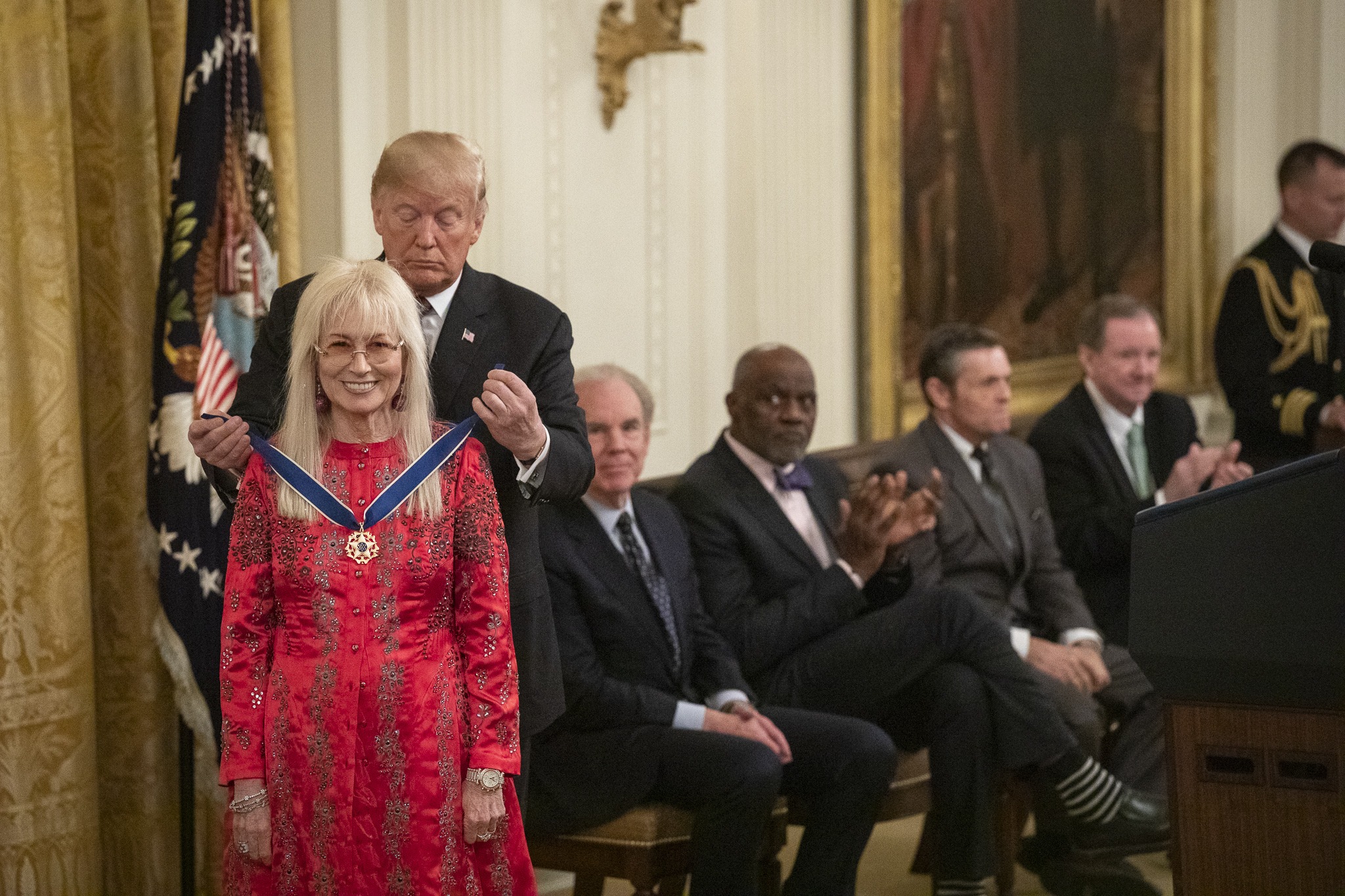 US President Donald Trump presents the Presidential Medal of Freedom to Miriam Adelson during a ceremony at the White House, Nov. 16, 2018. Choices like this demean the honor of such an award.  (Official White House Photo by Amy Rossetti)

Then lo and behold, in November 2018, Miriam Adelson was awarded the Presidential Medal of Freedom, a gesture which NBC’s Robert Schlesinger declared “perfectly captures the crassly transactional nature of Donald Trump and his presidency.” (To be fair, such actions occur in both parties: in the final hours of Democrat Bill Clinton’s presidency, for example, he pardoned Israel partisan and indicted fugitive Marc Rich.)

A few weeks later (just in time for Hanukkah), Trump announced the relocation of the American Embassy from Tel Aviv to Jerusalem, a move that much of the world frowned upon.

Trump recently bragged to the Republican Jewish Coalition that he had ignored calls from world leaders who might have pressured him out of the embassy decision. He spun this refusal to consult with world leaders as a great show of character: “unlike other presidents, I keep my promises.” He added, “I can tell you that Sheldon and Miriam, that is the most important thing I think that’s ever happened in their life.”

So perhaps Ms. Adelson’s op-ed in Israel Hayom is the purchase price for some trinket from the President. Perhaps she has her eye on a favorable comment about the annexation of West Bank settlements? Hubby’s face on Mount Rushmore? (More appropriately, since Sheldon Adelson declared regret over serving in the US Army instead of the Israeli one, he should have a neighborhood in the Golan named after him – perhaps right next to Trump Heights.)

It’s also possible that, rather than the initiation of a new transaction, her flattering words are actually the conclusion of a transaction.

Perhaps the price tags on the embassy move and the Presidential Bling of Freedom added up to more than $300 million. Perhaps the Adelsons still owed Trump a little something – the Jewish American community, for example. That would explain her words:

By rights, Trump should enjoy sweeping support among US Jews, just as he does among Israelis. That this has not been the case (so far; the 2020 election still beckons) is an oddity that will long be pondered by historians.

Ms. Adelson seems genuinely bewildered that the Jews of her second homeland (she holds dual citizenship) are not as enamored with Trump as she is – and she apparently believes that historians will be unable to unravel the deep mystery. But theologians might.

In her branding of Trump as a modern-day prophet, she framed his unpopularity among Jews in Scriptural terms: “Scholars of the Bible will no doubt note the heroes, sages, and prophets of antiquity who were similarly spurned by the very people they came to raise up.”

In other words, “learn your lesson, people. Don’t snub this prophet like you did the others. “Embrace him. Vote for him in 2020.”

(While Adelson frames her comments in Judaism, it is worth noting that neither the Jewish nor the Christian holy books actually support Zionism.)

Or possibly, the Adelsons are thinking on an even grander scale. Perhaps they are in the market for his Twitter account/foreign policy platform.

First the flattery: “Trump is a businessman and a statesman with an instinct for justice.” 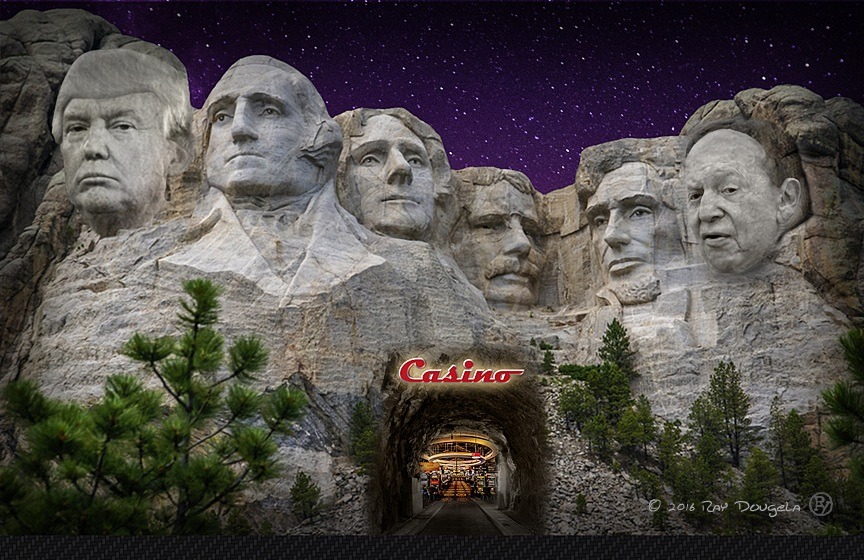 Then a carefully crafted call to be unrestrained in his allegiance: “He sees an Israel that does whatever is necessary for its security and defense, against the odds and sweeping international consensus.”

Internalizing this characterization, Trump could easily buck the pressure and stay the course in the event of another “war” with Gaza. His first tweet is already written for him: “Israel does whatever is necessary for its security and defense.” And as UN member states line up to condemn such an invasion, Trump would remain steadfastly and comfortably in Israel’s corner, despite sweeping international (“anti-Semitic”) consensus, secure in the knowledge that he has a special “instinct for justice” which the rest of the world can’t begin to understand.

Similarly, if asked to endorse the annexation of parts of the West Bank or renegotiate the Iran deal, Trump could create a tweet based on Ms. Adelson’s tribute:

In another service to historical justice, Trump declared the Golan Heights to be Israeli territory, and in service to the security of Israel and the whole world, he withdrew the United States from a nuclear deal with Iran.

It’s not hard to imagine what he might tweet: “Historical justice is a great thing, and Israel’s annexation of the West Bank is one tremendous example. Israel can count on the US to support historical justice every time.”

Miriam Adelson gave her president a yet another comprehensive foreign policy statement:

[The Trump] administration has made clear that the Middle East must come to terms with an Israel that is proudly permanent in the land of Zion – an Israel whose Jewish roots run deepest and whose ancestral, sovereign claims are without equal.

Jews’ claim to the land (whichever real estate the “land of Zion” might include) is deeper and stronger – just plain better – than the Palestinians’, and so it shall be, world without end. (Or if it’s not, the Adelsons might toss in few extra Benjamins on top the $300 million they’ve already spent to create bipartisan support for Israel in Washington.)

What more need be said? Only this:

Would it be too much to pray for a day when the Bible gets a ‘Book of Trump,’ much like it has a ‘Book of Esther’ celebrating the deliverance of the Jews from ancient Persia? Until that is decided, let us, at least, sit back and marvel at this time of miracles for Israel, for the United States, and for the whole world.

Indeed, Israel has been the recipient of the best miracles that money can buy.

ABOUT THE AUTHOR
Kathryn Shihadah is a journalist specialising on Middle East news. Her articles are found on many leading progressive journals, including Mint. Press News, PalestineHome.org, and others.

The plot to keep Jeremy Corbyn out of power

“Good Guys” And “Bad Guys” Are A Hollywood Illusion