Obama was the perfect front man for a cruel empire. Being partly black, he could be presented as humanitarian and considerate of the dark-skinned peoples the George W. Bush regime had ground under the American boot. Being a one-term senator from Illinois, he had no following and no independent political base, and thus had no ability to stand up to powerful organized interest groups.

Clarity Press is a good publisher for authors willing to provide real information in place of the officially sanctioned controlled explanations of our time. A current example is Jeremy Kuzmarov's assessment of Obama Obama's Unending Wars. The forty-fourth president comes across as a successful front man for corporate rule and Washington's imperialism. 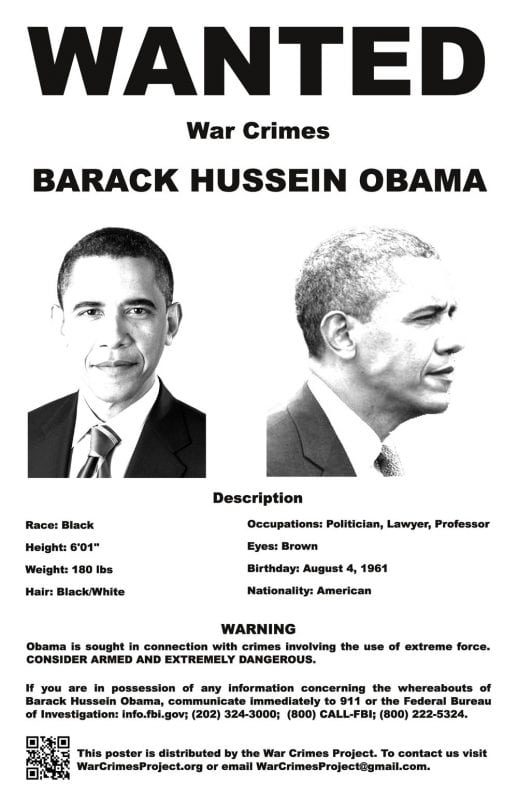 Obama was the "drone king" whose regime bombed seven Muslim countries, overthrew the democratic government in Hondurus, overthrew and murdered Gaddafi, tried to do the same thing to Assad in Syria, overthrew the democratic government in Ukraine and demonized Russia and the Russian president, tried to undermine and overthrow the democratically elected Latin American presidents Morales, Chavez, and Ortega, constantly lied through his teeth, and met with the approval of the military/security complex and global capitalists. Topping off these criminal events, Obama's regime adopted the policy of murdering US citizens on suspicion alone without due process of law. Execution orders were issued every Tuesday as Obama with CIA director John Brennan at his side chose presumed terrorists from mug shots and biographies prepared by no one knows who. "Some were just teenagers like a young girl who looked 'less than her 17 years.'"In the name of preventing atrocities, the Obama regime committed mass atrocities. One consequence was a massive flow of refugees into the US and its empire of peoples who have every reason to hate Americans, Europeans, Australians and Canadians for sending soldiers and bombs to destroy their homes and murder and maim their family members.

Obama was the perfect front man for a cruel empire. Being partly black, he could be presented as humanitarian and considerate of the dark-skinned peoples the George W. Bush regime had ground under the American boot. Being a one-term senator from Illinois, he had no following and no independent political base, and thus had no ability to stand up to powerful organized interest groups. Installed in office, he delivered the violence and mayhem that the ruling oligarchs wanted as they destroyed independent governments, controlled oil flows, and sought to establish Washington's and Israel's hegemony over the Middle East.

Kuzmarov's report on Obama fits the model of Washington intervention that many have reported. For example, General Smedley Butler, John Perkins, Confessions of an Economic Hit Man; and Stephen Kinzer, The Brothers. The difference is that Obama was very much aware that he was fronting for the ruling establishment, whereas General Butler initially thought he was defending American interests rather than the interests of the New York banks and United Fruit Company. Perkins thought he was helping the countries targeted by the projects for which he worked, and the Dulles brothers operated independently of presidents. Obama knew who he was serving and suffered no self-deception.

Donald Trump attempted to reassert the independence of the presidency and found himself framed on Russia-gate charges. It will be interesting to see if the authority of the office can be restored or whether henceforth the president will be a puppet of the Establishment.

Editor's Note: We're cool with PCR attacking Obama for his hypocrisy and abject criminality; the man deserves to be unmasked and we hope enough Americans will see the truth about this charlatan before he dies, but we are a bit confused by PCR's false dichotomy between Trump and the establishment. Or, rather, between any American president (so far) and the establisment (or deep state, if you like). For one thing all politicians who get to the presidential level are normally carefully vetted by the establishment's numerous filters. For another, most if not all such individuals spring from the bosom of the establishment, are recognised members of the ruling class, and are never really outsiders. True, here we might see an "accident", such as we find in Britain with Corbyn (see our article on this topic), but this kind of "accident" has yet to occur in America. Trump stunned the establishment which favored Hillary Clinton in 2016, and regarded Trump as an buffoonish outlier, bizarre even by the degenerate standards of US politics, but everyone also recognised the man represented no challenge to the core values of American imperialism, or the inegalitarian status quo, as his reign so far has amply demonstrated.  There's a rift in the establishment, and Trump represents a wing, but this is still very much a brawl between establishmentarians.

ABOUT THE AUTHOR
Submitters Website: http://www.paulcraigroberts.org/ •  Dr. Roberts was Assistant Secretary of the US Treasury for Economic Policy in the Reagan Administration. He was associate editor and columnist with the Wall Street Journal, columnist for Business Week and the Scripps Howard News Service. He is a contributing editor to Gerald Celente's Trends Journal. He has had numerous university appointments. His books, The Failure of Laissez Faire Capitalism and Economic Dissolution of the West is available here, and How America Was Lost, can be ordered here. His latest book, The Neoconservative Threat To International Order: Washington's Perilous War For Hegemony, can be ordered here.

Trump’s Fourth of July: The militarist bombast of a crisis-ridden system