Putin Confirms: Sergei Skripal Wanted To Go Back To Russia 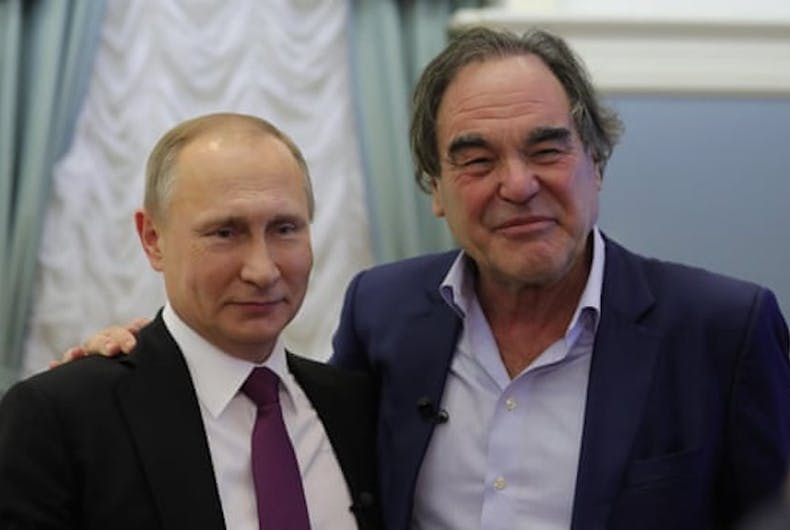 Filmmaker Oliver Stone recently interviewed the President of the Russian Federation, Vladimir Putin. The transcript was published yesterday evening. Most of the interview is about Ukraine. A separate piece will cover that country. There is also a passage about the U.S. election.

But the most interesting bits from Putin are about the Skripal affair.

The British and Russian double agent Sergei Skripal and his daughter Julia were impaired by some chemical substance in early March 2018 in Salisbury. Britain blamed the incident on Russia. CIA Director Gina Haspel, a former CIA station chief in London, used fake pictures of the incident to deceive Trump and to push him to kick out 60 Russian diplomats. (The NYT later ran cover for Haspel.)

We have speculated since the very beginning of the Skirpal case that the 'former' spy wanted to go back to Russia. Putin now confirms, to my knowledge for the first time, that this was the case (underline added):

Oliver Stone: What has happened to Skripal? Where is he?

Vladimir Putin: I have no idea. He is a spy, after all. He is always in hiding.

Oliver Stone: They say he was going to come back to Russia. He had some information.

Vladimir Putin: Yes, I have been told that he wants to make a written request to come back.

Oliver Stone: He knew still and he wanted to come back. He had information that he could give to the world press here in Russia.

Vladimir Putin: I doubt it. He has broken the ranks already. What kind of information can he possess?

The information Sergei Skripal possessed might have been related to the U.S. election and the Steele dossier which alleged that Russia had dirt on Trump. On March 8 2018, only a few days after the Sergei and Julia Skripal were allegedly poisoned, we discussed the connection in our first post on the Skripal affair:

[Christopher] Steele was an MI6 undercover agent in Moscow around the time when Skripal was recruited and handed Russian secrets over to the MI6. He [later] ran the MI6 Russia desk so anything about Skripal will have passed through him. It is very likely that they personally knew each other. Pablo Miller, who worked for Steele's private company [Orbis], lived in the same town as Skripal and they seem to have been friends since Miller had recruited him. Miller or someone else attempted to cover up the connection to Steele by editing his LinkedIn entry.

Here are some question:

If there is a connection between the dossier and Skripal, which seems very likely to me, then there are a number of people and organizations with potential motives to kill him. Lots of shady folks and officials on both sides of the Atlantic were involved in creating and running the anti-Trump/anti-Russia campaign. There are several investigations and some very dirty laundry might one day come to light. Removing Skripal while putting the blame on Russia looks like a convenient way to get rid of a potential witness.

The British government issued a D-Notice which prohibited the British press from further mentioning Pablo Miller.

We also speculated that Skripal wanted to go back to Russia:

The most curious point in the affair though is the visit of the daughter. She had just come from Moscow to visit her lonely father when both were poisoned in a rather sensational way. There must be some reason why she was involved in this.

The above questions are all highly speculative. But the connection between Steele and Skripal is way too deep to be irrelevant here. It certainly deserves more digging.

Putin now confirms that Skripal was indeed willing to come back to Russia. Oliver Stone thinks Skripal wanted to present something to the press. If Skripal had publicly said that he made up and wrote the Steele dossier, the anti-Trump/anti-Russia campaign by the Clinton 'resistance' would have been over. The whole Mueller investigation nonsense would never have happened.

Pablo Miller, the British spy, also appeared in the papers of the shady Integrity Initiative:

There is additional suspicion that the Integrity Initiative, whose primary function is to stoke Russophobia, was one of the brains behind the Skripal incident.

The Initiative was also involved in the Steele dossier and the russophobic anti-Trump campaign. Andrew Wood, a former British ambassador to Moscow, is employed by the Institute for Statecraft, the shadowy parent organization of the Integrity Initiative funded by the Ministry of Defense and Foreign Office. It was Andrew Wood who helped to disseminate the Steele dossier to U.S. Senator John McCain. McCain then gave the dossier to FBI Director James Comey. The FBI used the dossier first to get FISA warrants to spy on the Trump campaign, and, after Comey was fired, to launch a counter-intelligence investigation (section 3) against Trump himself.

Here is a theory how all this may come together. Back in 2015 the Institute of Statecraft and its russophobic director Colonel Donnelly discussed how to increase sanctions on Russia. In 2016 the Steele dossier was created in an attempt to connect Trump to Russia. Steele's colleague Pablo Miller and his spy Sergei Skripal were quite likely involved in creating the dossier. The dossier was disseminated with the help of Donnelly's Institute of Statecraft.

For some reason the Skripals had to be taken out. Sergei Skripal probably threatened to spill the beans about the dossier after it became public.  The highly scripted 'Novichok' incident in Salisbury was staged to remove Skripal and to smear Russia with an alleged murder attempt. Colonel McCourt, the trusted army nurse, was asked to help on the scene. After the Skripal incident, and with no evidence shown, Russia was blamed and massive sanctions followed. The Integrity Initiative, the propaganda arm of the Institute of Statecraft, analyzes the media results of the Skripal affair and continues to stoke the anti-Russia campaign.

It might be possible that Steele's 'dirty dossier', the Skripal case and the Integrity Initiativeoperation are unrelated. But that chance for that now tends towards zero.

The weak part of that theory was always that we did not know for sure if Sergei Skripal really wanted to go back to Russia. We now know that this was the case. Oliver Stone seems to know that Skripal wanted to go public about something. That makes the theory fit even better.

Putin does not believe that the Skripals were poisoned to kill them:

Oliver Stone: Who poisoned him? They say English secret services did not want Sergei Skripal to come back to Russia?

Oliver Stone: Makes sense. You do not agree with me?

Vladimir Putin: If they had wanted to poison him, they would have done so.

Oliver Stone: Ok, that makes sense. I don’t know. Who did then?

Vladimir Putin: After all, this is not a hard thing to do in today’s world. In fact, a fraction of a milligram would have been enough to do the job. And if they had him in their hands, there was nothing complicated about it. No, this does not make sense. Maybe they just wanted to provoke a scandal.

Oliver Stone: I think it is more complicated. You know, you think I am much too much of a conspiracy guy.

Vladimir Putin: I do not believe this.

Oliver Stone: I have seen things. I do.

Vladimir Putin: You should not.

When and where will the Oliver Stone documentary about the Skripal affair have its premiere?

---
Previous Moon of Alabama posts on the Skripal case:

About the Author
"b" is Moon of Alabama's editor in chief. He uses a nom de guerre.