Home AMERICAN BRAINWASH ‘World is watching’: US reaction points to Hong Kong as a ‘color revolution’ 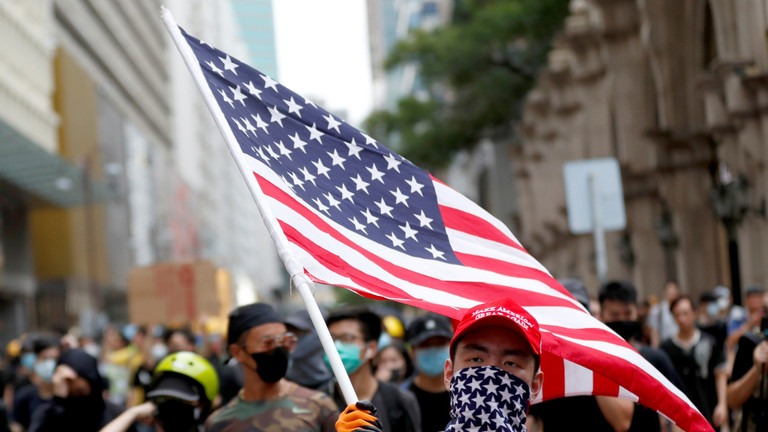 A protester carries a US flag during the march at Mongkok, in Hong Kong, China, August 3, 2019. (RT.com)

If the iconography and tone of Hong Kong protests and the support from US diplomats weren’t enough, Washington’s words of concern sure seem to suggest that the months-long demonstrations amount to a ‘color revolution.’

On Monday, the Trump administration urged “all sides to refrain from violence.” While carefully paying lip service to Hong Kong being an internal Chinese matter, the unnamed White House official who spoke to the press said the US supported those “looking for democracy.”

The people of Hong Kong are bravely standing up to the Chinese Communist Party as Beijing tries to encroach on their autonomy and freedom. Any violent crackdown would be completely unacceptable. As I have said on the Senate floor: The world is watching. https://t.co/5VPm5P4PfB

One cannot help but recall that the same phrasing was used for Ukraine, during the Maidan protests of 2013 that culminated in a violent coup in February 2014 – and plunged that country into secession of Crimea and civil war in the Donbass, eastern Ukraine.

The impression is only reinforced by the images reminiscent of Kiev coming out of Hong Kong, showing helmeted protesters in black masks firing grenades and throwing firebombs at police – none of which has stopped the chorus of US media from calling the protesters “pro-democracy.”

There is even nationalism, albeit of a xeno variety: some protesters have brandished flags of Hong Kong’s former colonial master, the UK. Others have embraced the US flag, telling reporters it stands for “freedom, human rights and democracy.”

Hong Kong protesters in Hong Kong proudly sing US National anthem “The Star-Spangled Banner” O say can you see ... What so proudly we hailed ...brings tears to my eyes 😂🤣💀pic.twitter.com/CeM5zrA1Fe

All of this has been seen before, most recently in Kiev but also in other places. There was even the requisite meddling by the State Department: US diplomat Julie Eadeh was photographed meeting with protest leaders. It wasn’t quite Victoria Nuland passing out cookies to the Maidan demonstrators, but it was enough to raise alarm.

The State Department did not deny the meeting, arguing that it was something “American diplomats do every single day around the world.”

This is very very embarrassing. Julie Eadeh, a US diplomat in Hong Kong, was caught meeting HK protest leaders. It would be hard to imagine the US reaction if Chinese diplomat were meeting leaders of Occupy Wall Street, Black Lives Matter or Never Trump protesters. pic.twitter.com/JfiU2O2HZq

“Our diplomat was doing her job and we commend her for her work,” State Department spokeswoman Morgan Ortagus said at a news briefing last week. Ortagus then denounced what she said was publication of Eadeh’s personal details, including the names of her children, in Chinese media as the action of a “thuggish regime.”

It is worth noting that the protests have already accomplished their original purpose, as the bill that would have allowed the extradition of criminal suspects to mainland China has been suspended. So now the demonstrators are calling for city officials to resign and broader political reforms, open-ended demands that will likely only grow with time.

Even though US President Donald Trump has steered clear of Hong Kong and made sure to describe it as an internal Chinese matter, focusing his diatribes entirely on trade, the Chinese public is becoming increasingly convinced that Washington is instigating turmoil in Hong Kong along the lines of “color revolutions” elsewhere.

HK media has the right to report on US diplomats who actively interfere in HK situation, and help people understand what they're doing. The US administration is instigating turmoil in HK the way it stoked "color revolutions" in other places worldwide. This is thuggish diplomacy. pic.twitter.com/4hkH7eYyEH

If this charge is in fact true, that is very bad news for the already strained Sino-American relations – but also for Hong Kong itself.

Color revolutions are a type of regime change technique developed by US strategists and executed by diplomats and non-governmental organizations. They rely on exploiting legitimate grievances of the local population, amplifying with money and marketing small groups of activists they either create or co-opt. The goal is to provoke the government into a violent crackdown, so as to destroy its legitimacy – whereupon it can be replaced in the name of “democracy and human rights.”

The prototype for this approach was the October 2000 coup in Serbia, which US diplomats and the cheerleader media then invoked in subsequent cases.

In the “best case” scenario, such as Serbia, the immediate body count is low but the country’s democratic institutions are irreparably damaged and corrupted by this sort of fraud and manipulation. Ukraine, Syria, or Libya are what the worst-case scenario looks like: civil war or anarchy, with tens of thousands of deaths.

Neither of which matters to the US diplomats, media or politicians, though. They declare it a “victory for democracy” and move on to the next target, to replay the scenario all over again.

ABOUT THE AUTHOR
Nebojsa Malic is a Serbian-American journalist and political commentator, working at RT since 2015