August 18, 2019
Please make sure these dispatches reach as many readers as possible. Share with kin, friends and workmates and ask them to do likewise.

Pushback with Aaron Maté
THE GRAYZONE

The Trump administration is intensifying its economic warfare on the people of Venezuela with a crippling embargo — and facing no resistance from the Democratic Party.  (Or the churches, for that matter.) 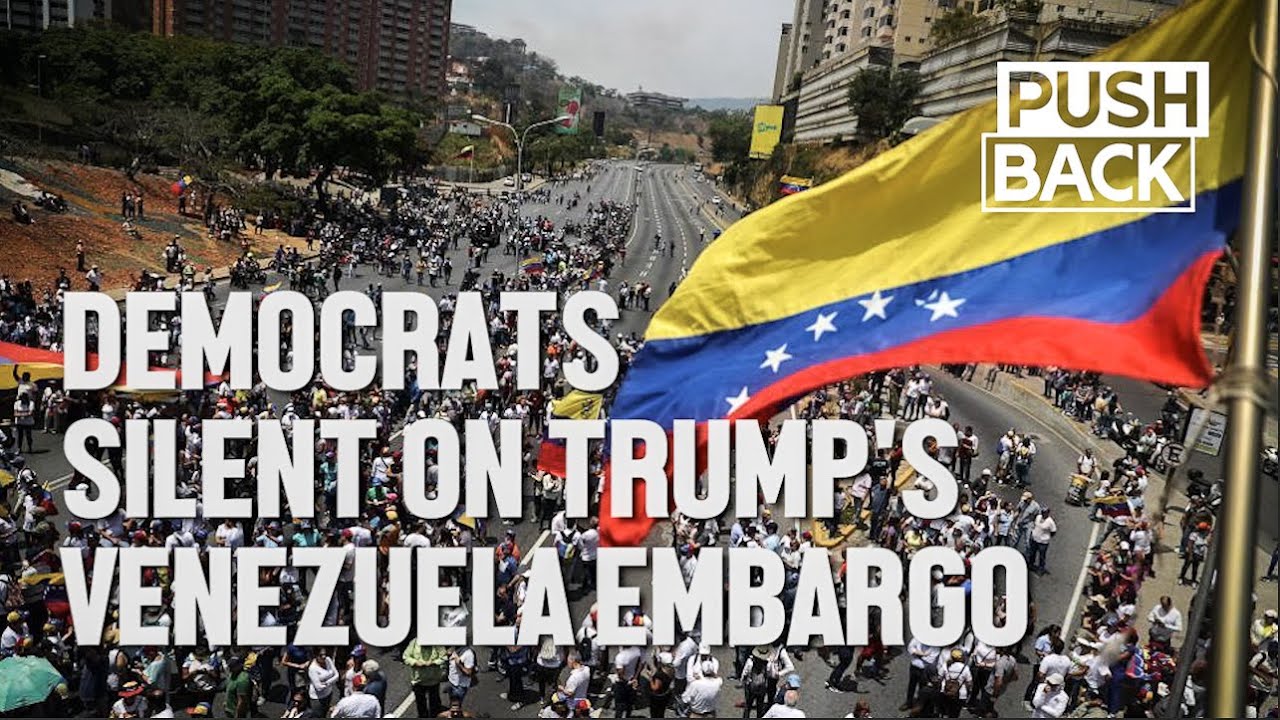 Aaron Maté: The Trump administration is intensifying its economic warfare on the people of Venezuela, and Democrats are pretty much silent. A new executive order from Trump imposes a full embargo on Venezuela and threatens sanctions against anyone who does business or offers support to its government. National Security Advisor John Bolton said countries of the world now have to choose which side they’re on.

Aaron Maté: Even before this embargo was imposed, experts were already warning of massive suffering and death in Venezuela. Venezuela has suffered the largest economic collapse in a country outside of war since at least the 1970s. Francisco Rodríguez, a leading Venezuelan economist and critic of the Maduro government, says the sanctions have cost Venezuela at least $16.9 billion dollars per year. His research links a major decline in oil production – which accounts for nearly all of Venezuela’s export revenue – to the imposition of US sanctions in 2017 and 2019. Speaking recently to Pushback, Rodriguez warned that US sanctions could cause a famine in Venezuela and possibly hundreds of thousands of deaths.

Francisco Rodríguez: “At this moment, given the information that we have, the most reasonable conclusion based on the data is that a famine is going to occur in Venezuela over the course of the next 12 months… I’m very concerned by the lack of discussion about what we’re going to do to stop hundreds of thousands of Venezuelans from starving to death.”

Aaron Maté: To John Bolton and the Trump administration, starvation apparently can’t come fast enough. The Venezuelan government claims that a ship carrying 25 tonnes of soy for Venezuela was recently detained in the Panama Canal and prevented from reaching its destination. At the same time, Bolton is ensuring that ongoing talks between the Venezuelan government and the far-right opposition are sabotaged. Even if Maduro agrees to new elections, Bolton has told the opposition that that won’t be enough. And Bolton rolled out the embargo on the eve of talks between the two sides in Barbados, leading the Venezuelan government to pull out – most likely as Bolton intended.

Bolton makes no secret of his goals: just as the US has done to other defiant countries, make the Venezuelan people suffer into submission.

Aaron Maté: When Bolton says that it worked in Nicaragua once, he means that the US waged a terror war throughount the 1980s until Nicaraguans gave up and voted out the leftist Sandinista government. This how one former CIA official described that tactic.

John Stockwell, former CIA Officer: The point is to put pressure on the targeted government by ripping apart the social and economic fabric of the country. Now that’s words, you know, social and economic fabric. That means making the people suffer as much as you can, until the country plunges into chaos – until at some point you can impose your choice of governments on that country.

Aaron Maté: So that is the Trump administration’s playbook in Venezuela today. And as this is happening before our eyes, Democrats are mostly silent, or even supportive. Top Democrats including Adam Schiff, Nancy Pelosi, Eliot Engel, Joe Biden, Bill Clinton, Chuck Schumer and Dick Durbin – have all come out to endorse the Trump administration’s coup attempt. This might not be a surprise given that the Trump sanctions are actually intensifying actions that began under President Obama. That is why Obama veterans like former Deputy National Security Advisor Ben Rhodes openly supports Trump’s crippling economic warfare and regime change on Venezuela – he just wants it done differently.

Ben Rhodes: Again, I want him gone. Like, we should all be very clear, this would be good. I do think that there’s a different way to go about this, which is to be tightening the noose, tightening sanctions, but to be very intensively trying to negotiate with the different factions inside of Venezuela — frankly talking to the Chinese and other countries about how to create some soft lining to a transitional government, that can then hold an election.

Aaron Maté: Now a handful of Democrats – Ilhan Omar, Bernie Sanders, Tulsi Gabbard, Ro Khanna, and others have opposed regime change in Venezelua – but even then their opposition is tepid, qualified, and rare. Just imagine if that were different: imagine how much harder it would be for Trump, Bolton, and Mike Pompeo to deny food and medicine to millions of Venezuelans if any of their critics in the Democratic Party or on cable news shows would make it an issue. But since this embargo was announced, they’re not even mentioning it.

So really, the Trump administration is not just relying on a strategy of making the Venezuelan people suffer. It is also relying on the assumption that it won’t face any domestic challenge for starving and besieging Venezuela – and so far, the plan is working.

Aaron Maté is a journalist and producer. He hosts Pushback with Aaron Maté on The Grayzone. He is also is contributor to The Nation magazine and former host/producer for The Real News and Democracy Now!. Aaron has also presented and produced for Vice, AJ+, and Al Jazeera.