Macron Came To The Conclusion.

August 21, 2019
Please make sure these dispatches reach as many readers as possible. Share with kin, friends and workmates and ask them to do likewise.

Andrei Martyanov
REMINISCENCE OF THE FUTURE 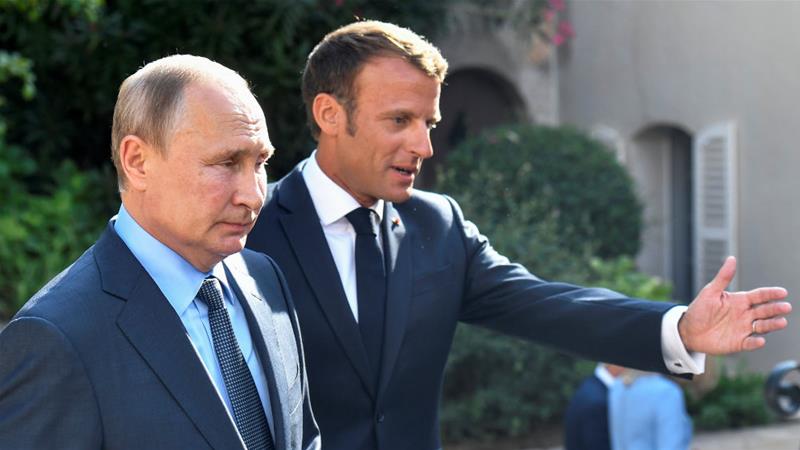 America’s churlish behaviour and inevitable capitalist fissures between the major blocs were liable to create a gradual rapprochement between Russia and the EU.

That Russia, as he twitted in Russian language, is “deeply European country“. Well, we all know that and Macron twitting in Russian after meetings with President Putin, who was on a state visit in France yesterday, is a nice gesture, in addition to bloviating about Europe from Lisbon to Vladivostok, but it seems that Macron missed the point. Forget Russia, it is Europe which is not European anymore. And nobody, except for a very narrow strata of Russian “liberals” in economic block really cares about “return to G-8”. Indeed, why? To do what? Photo-ops? I understand that Macron views Putin’ visit as a tool for his domestic politics but let’s be honest: what can possibly be discussed with a leader of the nation which resides in the economic and cultural limbo for a decade now and whose real global weight is not that significant?

Obviously Russia and France (and EU) have drastically different views on Syria and they are irreconcilable. Ukraine? Ukraine is under external control from Washington D.C. and, partially, from Berlin. Europe as a whole still remains and will continue to remain a US’ slap bitch, so nothing strategically meaningful can be discussed in Paris, other than some tactical questions and protocol cliche’ pleasantries about “Europe from Lisbon to Vladivostok”. And then there is this:

Moscow (AFP) – Russia and China warned Tuesday that a new US missile test had heightened military tensions and risked sparking an arms race, weeks after Washington ripped up a Cold War-era weapons pact with Moscow. The US and Russia ditched the Intermediate-Range Nuclear Forces (INF) treaty this month after accusing each other of violating the accord. Washington said the agreement also tied its hands in dealing with other powers such as China. The US Department of Defense announced on Monday it had tested a type of ground-launched missile that was banned under the 1987 INF agreement, which limited the use of nuclear and conventional medium-range weapons. “The US has obviously taken a course towards escalation of military tensions. We won’t react to provocations,” Russia’s deputy foreign minister Sergei Ryabkov told state news agency TASS. “We will not allow ourselves to get drawn into a costly arms race.”

Pay attention to how the article is formulated–see highlighted in yellow. Oh, the ambiguity, oh, the Minitrue mentality. Russia, obviously, will move her forces if the Land-Based Tomahawks (or whatever their current derivative) and possible modern iteration of “Pershing-II” will be deployed to Europe–Russia already has instruments to respond to this, but here is this “Europe” thing: Poland, Romania and other “new” Europeans are certainly contemplating such a move and neither Paris nor Berlin have any say over it. So, let Europeans (or whoever passes today under this moniker) and Americans sort it out between themselves before looking at Russia as some kind of instrument in domestic political processes, plus, as I repeat it ad nauseam–combined West is simply non-agreement capable, because the United States is non-agreement capable. Period. So, no amount of visits and pleasantries can change the situation, especially among people who know dick about Russia and her history.

UPDATE (same day): I know, some Russiagaters may have suffered a stroke, while many Russians got really tense, as in: Thanks, but no thanks.

WASHINGTON – President Donald Trump said Tuesday he believed Russia should be invited back into the Group of Seven club of industrialized nations. “I think it’s much more appropriate to have Russia in,” Trump told reporters ahead of his trip later this week to France where he will join other G-7 leaders at a summit.

Frankly, I already got tired of commenting on that–7 most “industrialized” nations? I am sure China has issues with that. And no, Russia is not “European” or “Western” nation by the metrics of contemporary Europe or US.

ABOUT THE AUTHOR
Andrei Martyanov is a leading naval/military geoanalyst with specialisation in Russo-American relations. He blogs at Reminiscence of the Future.