August 30, 2019 8 minutes read
Another important dispatch from The Greanville Post. Be sure to share it widely.
This essay is part of our special series on disgusting imperialists

[dropcap]T[/dropcap]he US Navy conducted another “freedom of navigation” operation (FONOP) on August 28 to demonstrate Washington’s rejection of Chinese territorial claims in the South China Sea. The provocation involved the guided-missile destroyer USS Wayne E. Meyer entering the 12-nautical mile “exclusion zone” around two Chinese-held islets in the Spratly Islands, Fiery Cross Reef and Mischief Reef. In doing so, it would most likely have passed in close proximity to other islands and reefs held by rival claimants, including Vietnam, Malaysia, the Philippines and Taiwan.

The two territories selected for the FONOP are among the most sensitive in the disputed area. The Chinese military has reclaimed land and constructed bases on both. Fiery Cross has radar installations, a port, hardened shelters for anti-aircraft and anti-shipping missile systems and a runway that can be landed on by strategic bombers. It is most likely garrisoned by 300 or more troops and other personnel. Mischief also has a long runway, a port and, the US has alleged, operational anti-aircraft artillery and missile batteries.

A US defence official told CNN that a “Chinese military vessel” had followed the US ship. 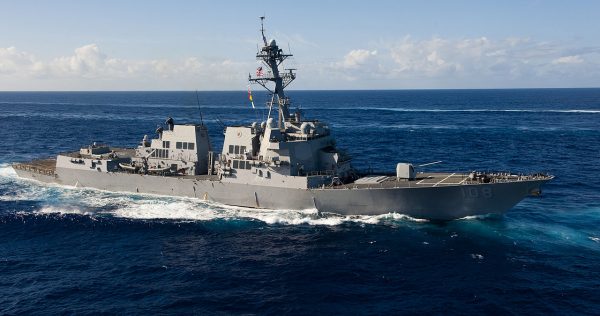 The USS Wayne E Meyer on operation in 2012. The ship is an Arleigh Burke-class guided-missile destroyer.

A press release issued by the Japan-based US Seventh Fleet asserted that the Wayne E. Meyer had been deployed to “challenge excessive maritime claims… All operations are designed in accordance with international law and demonstrate that the United States will fly, sail and operate wherever international law allows… FONOPs are not about any one country, nor are they about making political statements.”

Nothing could be further from the truth. The latest operation is a transparent political statement, intended to either provoke or intimidate the Beijing regime and Chinese military. It follows weeks of steadily rising tensions over Chinese naval operations near Vanguard Bank, an islet to the southwest of the main Spratly Islands group.

Vanguard Bank is claimed by China but lies within Vietnam’s 200 nautical mile exclusive economic zone (EEZ). Since May, Vietnam and Russian state-owned energy company Rosneft have been conducting exploration for oil and gas deposits using, under contract, the Japanese-owned Hakuryu-5 oilrig.

Similar Chinese threats and operations in 2017 and 2018 pressured Vietnam to cancel work that was being carried out by Spanish company Repsol in two “blocks” near Vanguard Bank. Repsol estimated that one of the blocks, known as 136/07, could be drilled for up to 45 million barrels of oil and 172 billion cubic feet of gas.

Hanoi’s reaction in July was lauded by Collin Koh, a pro-US strategic analyst at Nanyang Technical University in Singapore. He told the South China Morning Post: [T]he most important signal Vietnam wants to send is definitely it’s not going to back down… In the minds of the Vietnamese policy elites… doing so not only shows resolve to a domestic audience… but it also helps to draw international attention and help.”

The international “help” has above all come from Washington. On July 20, the US State Department formally condemned Chinese “bullying behaviour” and declared its assertions of its claims in the South China Sea “threaten regional energy security.”

On August 22, the State Department issued another missive. It declared that the return of the Chinese survey ship to waters near Vanguard Bank was “an escalation by Beijing in its efforts to intimidate other claimants out of developing resources in the South China Sea.”

Highlighting the economic interests at stake, the statement noted that there is an “estimated $2.5 trillion in unexploited hydrocarbon resources” in the South China Sea and that “US companies are world leaders in the exploration and extraction of hydrocarbon resources.”

The US, the State Department threatened, “therefore strongly opposes any efforts by China to threaten or coerce partner countries into withholding cooperation with non-Chinese firms” and was “committed to bolstering the energy security of our partners and allies in the Indo-Pacific region.” 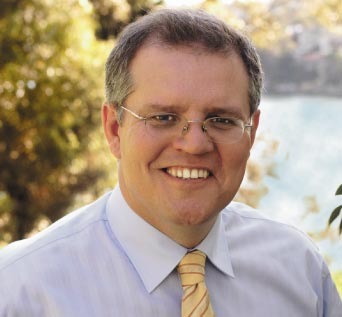 Britain's brood lead the pack (as does their motherland) among today's Washington vassal states. Their politicians constantly scrambling to show fealty to the criminal American empire. Australia's PM Scott Morrison fits that repugnant mould to a T.

Within 24 hours, Australia—one of Washington’s main imperialist allies in the Indo-Pacific—echoed the stance and the rhetoric of the Trump administration. In his keynote speech during a state visit to Hanoi, Prime Minister Scott Morrison indicated his government would support Vietnam against China, “because if we allow the sovereignty or independence of any of our neighbours to suffer coercion, then we are all diminished.”

The FONOP by the US Navy has—as Washington would have predicted and expected—fuelled tensions in what is already a volatile atmosphere.

A spokesperson of the Chinese People’s Liberation Army (PLA) condemned the sail-through by the destroyer as “navigational bullying” that “severely harms peace and stability in the South China Sea.”

Zhang Junshe, a researcher for a PLA academy, told the Chinese Global Times: “The US move shows that it does not want stability… They fear that the easing of the situation in the region will make their reasons for strengthening their military presence invalid in the South China Sea.”

Tian Shichen, a retired PLA Navy officer, told the publication that China should immediately act to “speed up our defense system implementation on the islands and reefs.”

Among the scenarios that could lead to a major escalation is some form of confrontation between Vietnamese and Chinese warships or aircraft around Vanguard Bank or an even more extensive US-led FONOP in Chinese-claimed territory.

Since the beginning of the year, the Trump administration has made calls on its allies—publicly naming Japan, Australia, Canada, New Zealand, the United Kingdom and France—to take part in a joint operation and demonstrate that they reject Chinese territorial claims.

The Australian government is under particular pressure from its own pro-US strategic, military and intelligence establishment to participate, for the first time, in a FONOP provocation against Beijing in the South China Sea (see: “Australia’s US Studies Centre advocates war-footing against China”).

The European External Action Service (EEAS), the defence and foreign policy department of the European Union, joined the implicit condemnation of China in a statement issued on August 28. It asserted: “Unilateral actions during the past weeks in the South China Sea have resulted in mounting tensions and a deterioration of the maritime security environment which represents a serious threat to the peaceful economic development of the region.”

In language that echoed US demands that China bow down to the 2016 international court ruling against its territorial claims, the EEAS called on “all parties” to accept the United Nations Convention on the Law of the Sea (UNCLOS)—a treaty the US does not even recognise.

Amid the line-up of the imperialist powers against China, Washington is taking other steps. On September 2, the US and all 10 member-states of the Association of South East Asian Nations (ASEAN) will conduct a small but significant joint naval exercise in the Gulf of Thailand. In Washington, it is considered an important part of shoring up its military and political ties with regional countries—especially Thailand, Vietnam, the Philippines, Malaysia and Singapore—from which it would rely on assistance in the event of war on China.

Editor's Note: While this piece is one of the most informative we could find on this volatile situation, the writer's hostility to China, informed by his publication's "anti-Stalinist stance" (a Trotskyist characteristic) introduces an element of unnecessary distortion in what should be an unreserved condemnation of US imperialist intrigues and blatant provocations in the far east. The world desperately needs peace, not the constant fostering of dangerous wars for the sake of a puny plutocracy.

About the author(s)
James Cogan writes for wsws.org. a socialist publication.