Know Your Enemy! Not China…Xi Jinping!

Another important dispatch from The Greanville Post. Be sure to share it widely.
China is rapidly replacing—or matching—Russia's demonisation campaigns. In the usual US propaganda playbook mode of facilitating the injection of mental venoms, a whole country deemed an adversary by the US elites summed up in a singly evil leader. The apex of this disinformation approach was and remains anti-Stalinism, a short-hand designed to stand for anything relating to communism, the Soviet Union, and socialism.  In this episode of Newsbud, Peter Lee dissects the ways US policymakers —acting as usual on behalf of the 0.0001% controlling the American nation—are scheming to create an atmosphere of complete hostility toward China. If unchalenged, this will not end well.

Newsbud
America’s [unilaterally created] confrontation with the People’s Republic of China is heating up. Not just the trade war and the 25% tariffs on $200 billion in Chinese goods announced by Donald Trump. Not just the release and promotion of an ultrahawk Pentagon assessment of China’s military capabilities. The real sign we’re getting serious about China is the appearance of the designated boogeyman: Xi Jinping to personify elite US anxiety and anger concerning China. This episode looks at the road ahead: the road toward U.S. confrontation with the People’s Republic of China. Its waypoints: the Philippines and Taiwan. Its watchwords: “decoupling” and “UNCLOS”. The estimated time of arrival: 2020.
THINK! 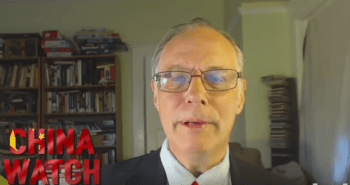 PETER LEE • Newsbud Senior Analyst & Commentator • Peter has been involved in East Asian affairs since 1979, first as a businessman and then as a writer. He has been writing on China with a focus on US policy since 2005. Mr. Lee’s work has appeared at Asia Times, CounterPunch, Japan Focus: The Asia Pacific Journal, and the South China Morning Post. He is the proprietor of the China Matters blog.

What Does Bolton’s Ouster Mean to Victims of US Imperial Aggression?