Home BOUGHT POLITICIANS & PHONIES What is your unpopular opinion about the popular Hong Kong protest?

What is your unpopular opinion about the popular Hong Kong protest?

Hong Kong is already dead. The elite in both Hong Kong and Mainland China already know it. The people who are pumping out optimistic wishful thinking are just providing cover for those who need time to make an orderly exit.

This “protest” will last for many years, and when it ends, it will not end in a big, explosive bang, but in a whimper of tens of thousands of people lining up at the customs, waiting to cross over to Shenzhen for a job.

The Chinese government has zero interest in stopping Hong Kong’s “popular protest” or riot. The big picture is that Hong Kong has been viewed as an increasing case of cancerous growth since 2008, for two reasons. Both are “long-term fatal”-kind of diseases. One is that it’s a prime case of “rentier economy” that Mr. Martin Wolf just wrote about in Financial Times. Martin Wolf: why rigged capitalism is damaging liberal ...Basically rent-seekers (real estate cartel) squeezing blood out of rocks and choking off healthy competition and innovation. The other is that it’s too big of a Tax Haven for Mainland cash.

Dr. Brad Setser wrote about this phenomenon for the US, where the US companies now book 7 times of their corporate profit in offshore tax heavens than in the US itself. China’s case is not as extreme, but the Chinese government hates it more, and also it typically prefers solving problems early, instead of kicking the can down the road and allowing the mess to grow even bigger. 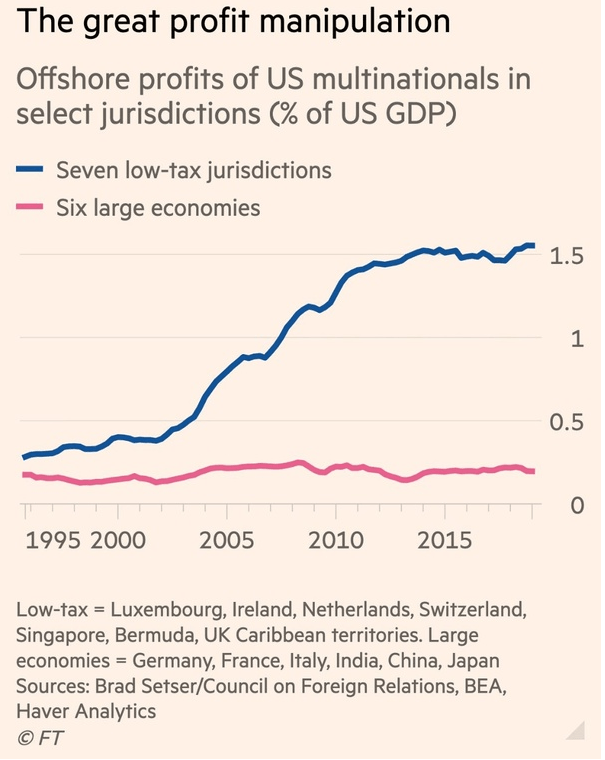 There are new cancer drugs that treat cancer by choking the blood vessels feeding the cancer. Drug That Chokes Off Tumor Blood Vessels Offers New Hope To Lung Cancer Patients. In Hong Kong, the riot is serving the same purpose on both the rentier economy and the tax haven. Rent is coming down, and tax haven is going kaput. The Chinese Government has been very clear on these issues from Day One: The Rent Seekers need to reform their own “rentier economy” and make a more honest living than being a darn tax shelter. Take care of the mess yourself, or if you wait for me to come in, I’ll take care of both you and the mess.

PS: Hong Kong being an irreplaceable financial hub and FDI entry point to China is mostly mental self-medication. China is already the biggest creditor to the rest of the world, lending out twice as much as the WorldBank and IMF combined. All that financing came from the trusted Beijing/Shanghai banks, like EVERY OTHER COUNTRY in the world who doesn’t do this “special administrative” thingy! China’s overseas lending is worth 6 per cent of the global economy

• This item, also published on Quora, was brought to our attention by Godfree Roberts, far east correspondent, an expert on China affairs, and a resident of Thailand.