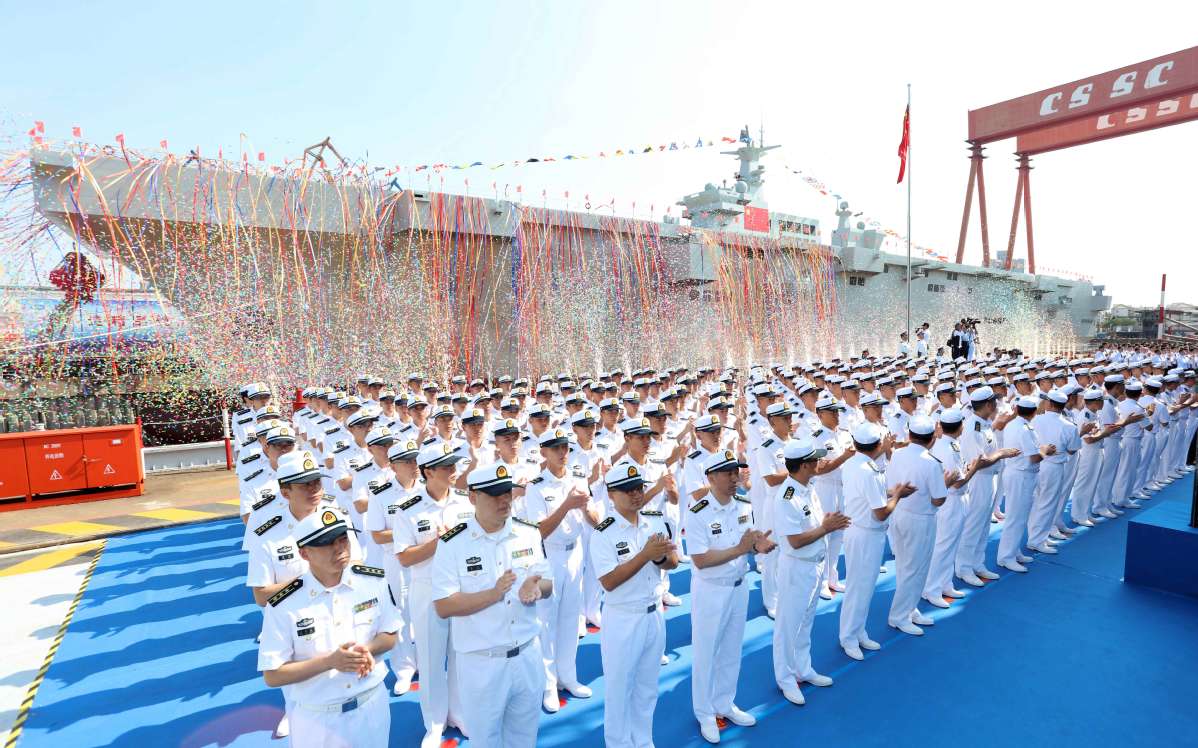 With the US empire looking for a fight, which, incidentally was long anticipated by savvy observers, the Chinese leadership was left with no choice but to arrange for the rapid expansion of the nation's navy.  In this, history repeats itself: It was Western imperialist threats and invasions that forced the Soviet Union into a rapid military buildup, eventually making that nation a world superpower. The two accounts below, one by a Chinese source, the other by Forbes, an American publication, concur on the details and even on the implications of this major strategic event. It's noteworthy that the author of the Forbes dispatch, H I  Sutton, is clearly impressed with the Chinese achievement, and says so.
[dropcap]C[/dropcap]hina's first amphibious assault ship was launched in Shanghai on Wednesday, coming closer to the completion of its construction project.

The People's Liberation Army Navy said in a statement that after a brief ceremony starting at 9:20 am at an unidentified shipyard, waters began to be pumped into a dry dock in which the ship's hull was built.

Participants at the ceremony – officials from the central and Shanghai governments, officers from the Central Military Commission's Equipment Development Department and the PLA Navy, executives of the State-owned conglomerate China State Shipbuilding Corp as well as the vessel's designers and construction workers – applauded as they watched the launch process, the statement said, without providing more details about the event.

In shipbuilding terminology, launch refers to the process during which a nearly-finished ship is moved into water. It is one of the most important stages in a ship's construction because once a ship is launched, it means that its major structures have been readied and major work of the entire construction project has been done.

According to the Navy, the new ship, whose name remains unknown as the Chinese military usually makes public a warship's name at its commissioning ceremony, was domestically developed and constructed. It will have a strong capability to carry out amphibious combat and other tasks.

The Navy added that in the next phase, engineers will start outfitting and fine-tuning the vessel's equipment and then conduct mooring tests and sea trials.

Observers familiar with the PLA Navy's hardware have pointed out that the new ship is the first in the Type 075 class of amphibious assault ship, which is also defined as a type of landing helicopter dock.

Foreign media reported it is being built at Hudong-Zhonghua Shipbuilding, a major shipbuilder under China State Shipbuilding Corp.

While recent events have focused military thinking on the Persian Gulf, a small corner of the defense community have been looking in an entirely different direction: towards China. The country’s first amphibious assault carrier, a 35,000-ton behemoth, is about to be launched from an innocuous-looking shipyard in Shanghai. When the new warship enters the water it will, in a near-instant, transform the People's Liberation Army Navy (PLAN).

Amphibious ships are particularly relevant because of China’s vast territorial claims in the South China Sea, border disputes further north with Japan, and the long-standing threat to the last holdout from the communists: Taiwan. For many years a potential Chinese assault on Taiwan was mocked as the “million-man swim” because the navy did not have anything approaching the amphibious capability needed to land enough troops on the island. Today these derogatory jokes are fading into memory as defense watchers count the new warship in China’s naval modernization. <>

Chinese warships are built at incredible speed – just six months after the first construction photos the ship appears ready for launch. Monday morning, observers spotted a red lantern hanging from the ship’s bow, a sign of an impending launch ceremony.

This rate of warship construction is itself impressive. It is only 12 years since China commissioned the Type-071 class. That was the first of at least seven landing platform-docks (LPDs) which each carry four large helicopters and have a well-deck for transport hovercraft. These were already a massive leap in Chinese amphibious capabilities, but the new Type-075 will be in the next league. In terms of size it is likely to be larger than the Australian or French equivalents and second only to the U.S. Navy’s Wasp Class and America Class on the world stage.