September 25, 2019 5 minutes read
Please make sure these dispatches reach as many readers as possible. Share with kin, friends and workmates and ask them to do likewise.

Red Taxis to the rescue in Communist-Socialist China! 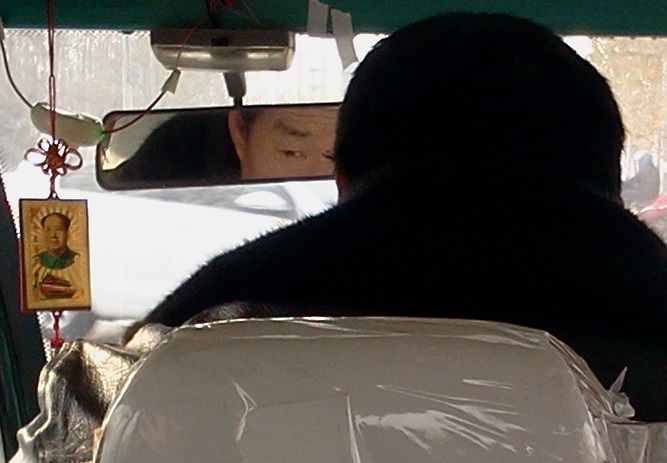 Pictured above: it’s not just commie cabbies. Seeing communist symbols in taxis, tuktuks and places of business gives everybody in China a sense of trust and comradeship. This is a photo I took in a Beijing tuktuk, presented in The China Trilogy (see below). A Buddhist-like Mao medallion is hanging on the driver’s left. Below Mao’s image is a fresco of Tiananmen Gate, where his iconic portrait hangs in perpetuity. The Chinese writing is too blurred for me to read… I remember that tuktuk drive. It was as cold as Hades. Froze my buns off!

Sixteen years with the people on the streets of China, Jeff

[dropcap]I[/dropcap]n May 2018, an airline stewardess in Zhengzhou, Henan Province called a taxi via Didi Dache, which is like Grab and Uber. She got in late at night from a flight and the driver murdered her.

After that happened Baba Beijing got into action and told Didi they had to get this problem  fixed, like NOW! It had been festering. This was on top of other people who were using their relatives’ I.D.’s and WeChat accounts to sign up as drivers and some were bad actors. A couple of women got raped, a couple more riders got beaten up and one guy got stabbed. So, Baba Beijing said enough is enough.

Didi said, Yessir, Baba!, and the first they did was stop a hitchhiking app they launched, which was causing public safety problems, and as far as I know, it is still moribund. Then, Didi really went to work and came up with a robust I.D. identification system for their drivers. Since that spat of incidences, I have not heard of any social-media worthy Didi horror stories. Given that China has 1.4 billion citizens and millions of Didi drivers, not to mention millions of movers hired via Huolala and millions more for pickup and delivery services, it’s amazing how few problems there really are. That’s because as soon as bad news gets blasted on social media, Baba Beijing lets the whole country know it came down on that company like a ton on wonton, not to mention the vendor risks getting on the Social Credit System black list, which it a kiss of commercial death, something I’ve written a lot on (https://chinarising.puntopress.com/search/?q=social%20credit&postTypes=post%2Cpage%2Ctestimonials%2Cphotogallery). Baba Beijing follows up too, with articles in the media about what remedies were taken, and these get blasted on China’s mega-gargantuan social media system. Got a problem in a communist-socialist country? Complain to your from-the-bottom-people’s- participatory, democratic government to get results.

Chinese people have so much faith and trust in the Communist Party of China and its 90+ million members. Why? Because, since the 1920s, they have to live up to Mao Zedong’s eternal motto,

I’ve actually written much about this (https://chinarising.puntopress.com/search/?q=mao%20zedong&postTypes=post%2Cpage%2Ctestimonials%2Cphotogallery ). I even have a badge on all my hats with the famous gold medallion of Mao’s silhouette and below it, his iconic calligraphic mantra, where he wrote, Serve the people, which you see everywhere in China. So, isn’t it amazing? In the West, communism is diabolicized, demonized, rejected, hated and feared. Just mention the word and bug-eyed sheeple start foaming at the mouth in Pavlovian dread.

Yet, in the world’s most successful socio-economic people’s democracy (https://chinarising.puntopress.com/search/?q=chinese%20democracy&postTypes=post%2Cpage%2Ctestimonials%2Cphotogallery), citizens are happy to call a commie cabbie. They realize that communists have a very high bar of social and economic responsibility to hurdle over.

So, when you’re in China and you want to make sure you get a Mao Zedong approved driver, hire a Red Taxi!

Netanyahu on Steroids: What a Gantz-led Government Means for Palestine

Perhaps the Most Important, Yet Most Marginalized Story...

Xi Jinping’s Visit to Saudi Arabia and the...