October 14, 2019
Please make sure these dispatches reach as many readers as possible. Share with kin, friends and workmates and ask them to do likewise. 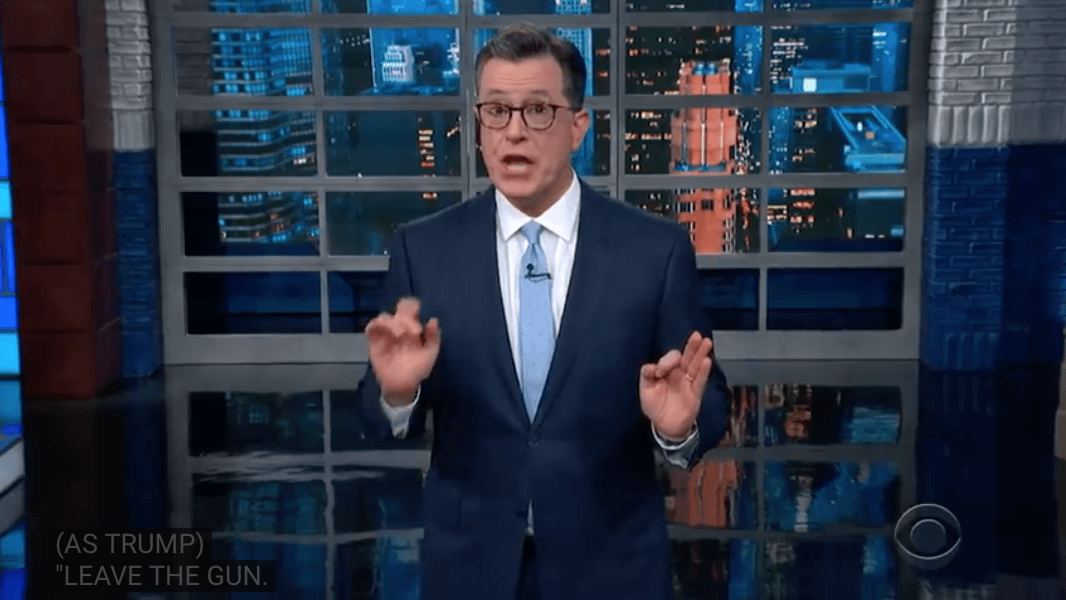 Stephen Colbert doing his intro schtick. The man operates as a shameless Democrat party shill, as do Bill Maher and John Oliver, among others. Colbert, however, has taken this imposture to new heights.  His show is now an obligatory stop for those suffering from Trump Derangement Syndrome.

Consider the role of comedians, Stephen Colbert in particular, as political activists who, in supporting a particular political party, play an important role in forming public perceptions. In doing so they reinforce the validity of the Two-Party System.

“Concerned that Trump is continuing and expanding all of Obama’s most evil policies, which were just a continuation and expansion of Bush’s most evil policies? Don’t think about that; let’s make fun of his hair.” –Caitlin Johnstone, ‘Every Late Night Talk Show Is A Sleazy Plutocratic Rim Job’, May 12, 2017

Comedians can get away with damned near everything. No matter where they wander philosophically, politically, culturally, they always have an out. Unless there’s something incriminating like sexual harassment or murder in broad daylight, they’re essentially bulletproof: “Hey, it’s comedy. It’s all just having fun. Anything for a laugh.”

But Stephen Colbert has become another animal altogether. The introductory monologue has [been] more or less obligatory for nighttime talk show hosts since the middle of the last Century. In Colbert’s tenure, the monologue has long since morphed into what is arguably the Democratic Party’s most powerful and persuasive voice — and, conversely, one of loudest and most effective anti-Trump forces on daily TV. Ever since the 2016 election, Colbert’s monologues have consisted of essentially nothing other than laser-like Trump bashing and a relentless pushing of “Russiagate”, along with occasional reminders of “pee pee tapes”. Woven into the mash are mock-emotional reminders — even to the extreme of his assuming fetal position on the floor — of the glorious past of the Obama years and of the wonderful world we could have had if only we had chosen Hillary Clinton.

If you look back over the years, Colbert has done everything his position affords to advance the interests of President Obama, both during and after his Administration, (here , here and all over the Internet). Likewise Michelle Obama (e.g., here, here ), likewise the Clintons (both, e.g., here , here ), and the Democratic Party itself. And God forbid anyone would see fit to Walk Away from the terminally corrupt Democratic Party, because, you know, it all has to be dumped at the doorstep of the Russians, carefully portrayed as evildoers perfect for framing. And people eat it up; He’s the king of Late Night!

For a zoologist whose life has been built around environmental issues, Trump is an unmitigated disaster set on a path that may cause permanent damage to our home planet, and he’s a daily embarrassment on the world stage to boot. But the Democratic Party is itself rotten to its money-drenched core, and the Clintons have been absolutely central in the Party’s rebuffing of the working class and for its plunge into the abyss of corporate riches. Barrack Obama, for all his charisma and oratory, followed the Clinton’s course to a “T”.

Comedians, like the court jesters of old, have a platform on which they can taunt the King with a level of impunity. With the unique freedom their art provides, they can plumb the depths of the human condition, and, like Puck, expose and make light of “what fools these mortals be.” George Carlin and Bill Hicks did that masterfully, and so have Richard Pryor, Lenny Bruce, Dave Chapelle and plenty of others. Colbert is nothing like them. He is a Democratic Party activist, and given his time slot, he catches us at the end of the work day as we’re winding down, when we want to relax and laugh, and when our critical thinking is not at its sharpest.

By spitting on the System, Trump has done everyone a favor by demonstrating that it’s possible. He had enough cash in hand to do what nobody in living memory had the balls to do, as well as a deranged kind of persona that won him a billion dollars of media attention. Now we have a midterm election coming up that’s being hawked, like so many before it, as the most important of our lives — or of the century — or of forever. But with this corrupt System, the people will lose whatever the outcome. If the Democrats win, so what? They sold out in the 90s. We’re like sheep, fed on a lie that the Two-Party System is all we have, so we herd ourselves every couple of years into booths to vote for a lesser evil. There’s a revolution wanting to be born, and allegiance to the thoroughly corrupt Democratic Party is like a dam holding it back. And the Democratic Party’s nighttime jester is a big brick in that dam.

For the record:
Here’s the complete video clip.

About the Author
Bill Willers is emeritus professor of biology, University of Wisconsin at Oshkosh. He was founder and former director of the Superior Wilderness Action Network (SWAN), editor of its newsletter, and editor of ‘Learning to Listen to the Land’ and ‘Unmanaged Landscapes’, both from ‘Island Press’. Since departing the University, interests have moved to U.S. imperialistic foreign policy, militarism and political corruption. Online articles have appeared at Counterpunch, Dissident Voice, The Greanville Post, Veterans Today, Information Clearing House, Common Dreams, OpEdNews.

Will the Democratic Party Exist after 2020 Election