California Is the First State to Ban Fur Sales 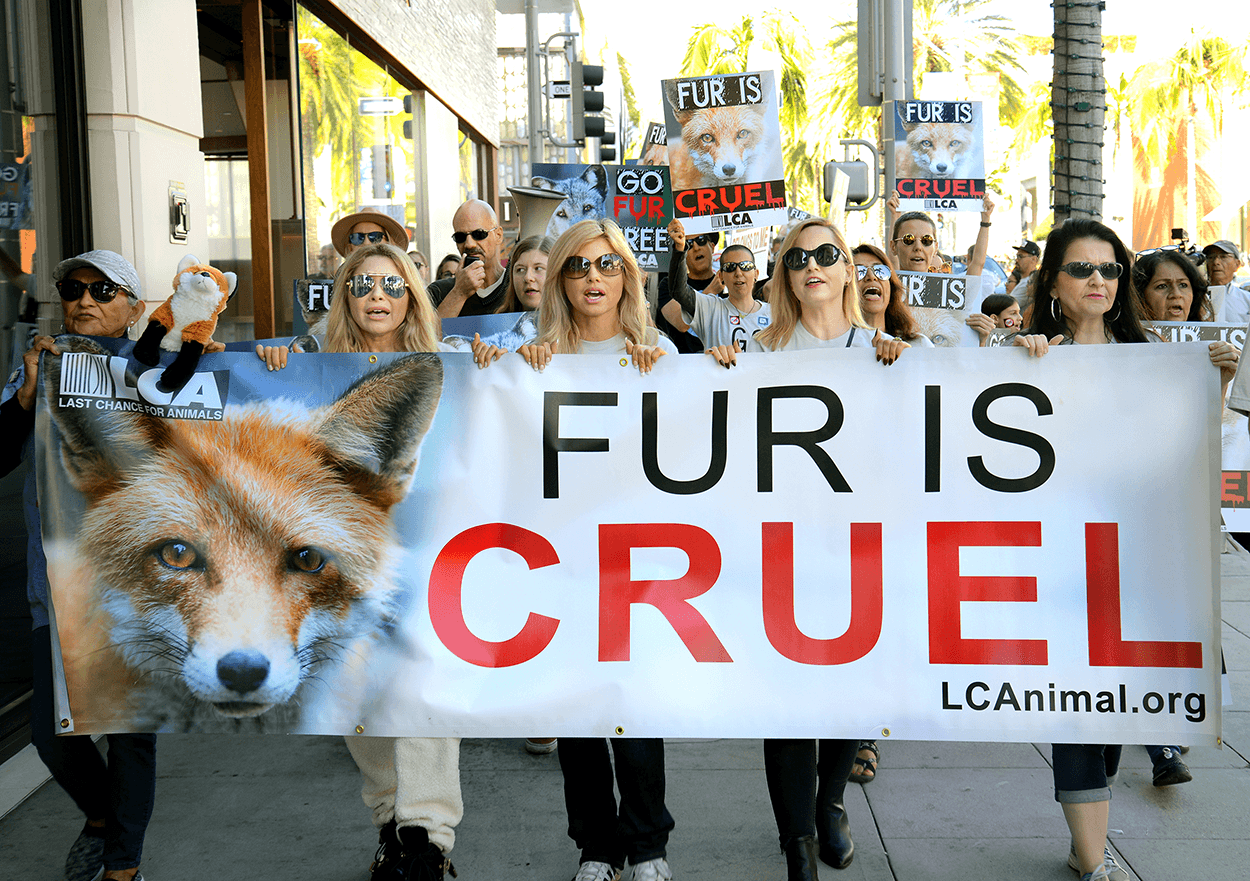 ABOVE: The battle against furs has been going on for many decades; it has ebbed and flowed, with a/r victories and industry comebacks. Let’s hope the California example spreads to otehr parts of the country and beyond. When it comes to warmth, many products are now superior, including some faux furs, and there’s no barbarity involved. (Photo: Last Chance for Animals)
California Governor Gavin Newsom signed into law a bill that that bans the sale and manufacture of fur products in the state. The fur ban, which he signed into law on Saturday, prohibits Californians from selling or making clothing, shoes or handbags with fur starting in 2023, according to the AP.

The law goes beyond the sale and manufacture of fur and also bars residents from donating fur products.

“CA has no place for the inhumane & unsustainable treatment of animals,” tweeted state assemblywoman Laura Friedman who authored the bill. “Now for other states to follow in our legacy.”

The law defines fur as “animal skin or part thereof with hair, fleece or fur fibers attached thereto.” For fur shoppers that means they will not be able to buy mink, sable, chinchilla, lynx, fox, rabbit, beaver, coyote and other luxury furs, according to The New York Times.

“The signing of AB 44 underscores the point that today’s consumers simply don’t want wild animals to suffer extreme pain and fear for the sake of fashion,” said Kitty Block, CEO and president of the Humane Society of the United States, as the AP reported. “More cities and states are expected to follow California’s lead, and the few brands and retailers that still sell fur will no doubt take a closer look at innovative alternatives that don’t involve animal cruelty.”

There are some fairly significant exceptions to the law, especially for cowhide, deerskin, sheepskin and goatskin, which means shearling is acceptable. There are also exceptions for religious observances like the fur hats, or shtreimels, worn by Hasidic Jews and furs and pelts worn for traditional tribal, cultural or spiritual purposes by members of Native American tribes, as The New York Times reported.

Similar bans banning fur sales have been introduced in New York and Hawaii, though they have not yet made it into law. The California ban does follow the lead of some of its largest urban centers, including Los Angeles, San Francisco and Berkeley — all of which have some sort of fur ban in place. Additionally, several European countries have outlawed fur farming, including Serbia, Luxembourg, Belgium, Norway, Germany and the Czech Republic, according to The New York Times.

The fur ban was not the only animal rights bill that Gov. Newsom signed on Saturday. He also signed a few other bills designed to prevent animal cruelty.

One bill puts a stop to wild animals like tigers and elephants from performing in circuses. The law exempts dogs, cats and horses. It does not apply to rodeos.

Another law puts a moratorium on hunting, trapping and killing bobcats, and another protects horses from slaughter, as CNN reported. One bill that Newsom signed took aim at trophy hunting by expanding the list of dead animals that cannot be sold in the state legally.

“California is a leader when it comes to animal welfare, and today that leadership includes banning the sale of fur,” Newsom said in a statement, as the AP reported. “But we are doing more than that. We are making a statement to the world that beautiful wild animals like bears and tigers have no place on trapeze wires or jumping through flames.”

The animal rights organization People for the Ethical Treatment of Animals (PETA) hailed the bills.

“Today is a historic day for animals in California, including those who have been whipped into performing in circuses, or skinned alive for their fur or skin,” said Tracy Reiman, executive vice president of PETA, in a statement, as CNN reported. “PETA is proud to have worked with compassionate legislators to push these lifesaving laws forward and looks to other states to follow California’s progressive lead.”

The wheels of business and human food compulsions are implacable and totally lacking in compassion. This is a downed cow, badly hurt, but still being dragged to slaughter.  With plentiful non-animal meat substitutes that fool the palate, there is no longer reason for this senseless suffering. Meat consumption is a serious ecoanimal crime. The tyranny of the palate must be broken. Please consider changing your habits in this regard.

SAUDI ARABIA IS OPENING ITS DOORS: BUT WHAT WILL YOU SEE ONCE THERE?

To Adapt to the Escalating Climate Crisis, Mere Reform Will Not Be Enough

Unfortunately, the State is using fascist methods to achieve its goal. No government should be telling people what they can wear or purchase for wearing apparel. That is what a free market is for. Man has been wearing furs since the dawn of time and it was the fur trade that opened up the North American continent to European settlers. As little as 20 years ago, indigenous peoples who wanted to maintain their original lifestyle were trapping and selling fur pelts. Now they have been relegated to just thinking about their former relationship with nature. Fur trapping and business need not be cruel, at least, no more than the meat and leather industries. By stopping the fur trade, we have upset nature, because we have been actively involved with it from the dawn of time. All those wild animals that used to be trapped for their coats are now free to disturb nesting birds and rob their nests. I wouldn’t doubt that a number of the missing wildfowl in North America (3 billion or more) are those that were never born due to being eaten by mink and other forest predators while still in their shells. Before upsetting nature, homework should be done so you know what the results might be.