Home ABOMINATIONS Why Withdrawing US troops from Northern Syria is GOOD

Why Withdrawing US troops from Northern Syria is GOOD

As Rick Sterling is quick to point out, the US Congress and media pundits—in bipartisan agreement—are throwing fits over Trump's Syria pullout, but this is one of those rare cases of "accidental morality" for which Trump will be remenbered, and which the Democrats, supposedly the "progressive wing" of the empire, should be applauding. (The Kurds have been betrayed before by the US, so this is hardly a Trump original crime). Either way, the CIA Democrats' meltdown and their hysterical cries for continued war and US involvement in Syria shows clearly who really owns them, and why the revolting duopoly should be seen for what it is, a pretentious blabbering mob of criminals in the service of an imperial plutocracy. —PG 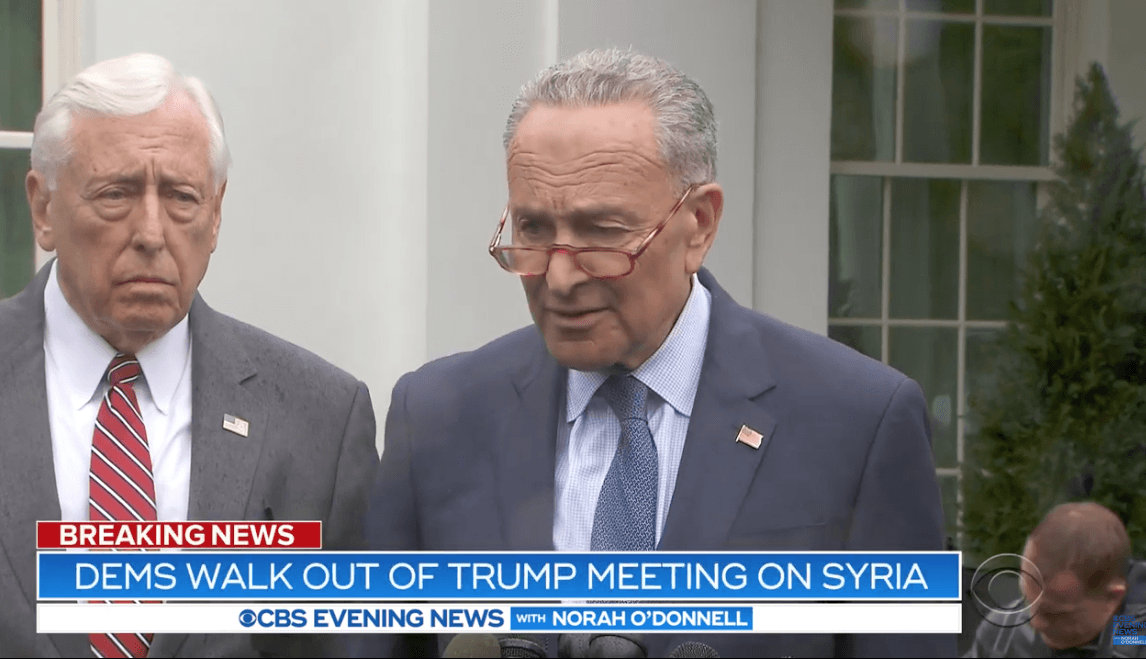 The foreign policy elite is in an uproar. They claim "we have abandoned our allies". They question "how can America be trusted?" They say the decision to withdraw from northern Syria was a "gift" to Russia, Iran, and Assad.... even ISIS. It is true that the policy of US/NATO interventionism is failing. But that has been true since the invasion of Iraq or earlier. After the disastrous invasions and attacks on Afghanistan, Iraq and Libya, and the 8 year undeclared war on Syria, isn't it time to question the foreign policy elite?

If one believes in restoring international law and the UN Charter, it is GOOD that US military forces have been withdrawn from northern Syria. Here are some facts and history which explain why.

Basic fact: Syria is not our country and US troops were never authorized by the sovereign government. Whether or not Washington likes Damascus is irrelevant. Under international law those troops have no right to be there. Even the overflights of Syria by the US air coalition violate international agreements. It's up to Syrians to defend their country against invading Turkey. If they choose to get support from another country, that is their right.

Another fact: President Obama was correct when he said that "putting boots on the ground" in Syria would be a "profound mistake". Later he said, "We have a very specific objective, one that will not lead into boots on the ground or anything like that." But the hawks prevailed. There were not only "boots on the ground", there was a shifting rationale why they had to be there. [In this, Obama, as usual, hid behind his rhetoric to implement the empire's instructions, and he did that with what some observers would easily qualify as "administrative enthusiasm."—Eds)

The US and allies have done all they could, short of direct invasion, to overthrow the Syrian government. They have spent tens of BILLIONS of dollars in weapons, training, equipment, recruitment, etc.. This is in violation of international law. More than one hundred thousand Syrians have died defending their country against a foreign sponsored army of mercenaries and foreign fighters.

An astonishing fact: The US encouraged the emergence of the Islamic State. Why? Because it put pressure on Damascus and because it justified the entry of the US. While the US carpet bombed Raqqa, it looked the other way as hundreds of trucks conveyed oil from eastern Syria into Turkey to fund the Islamic State. The US air coalition attacked the Syrian Arab Army (Syria's legitimate armed forces) in the midst of a critical battle against ISIS near Deir Ezzor. In a secretly recorded conversation in New York with Syrian "activists", John Kerry admitted they were watching ISIS and hoping to use it to pressure Damascus. In other words, US foreign policy was duplicitous and used terrorism as a tool. This is well documented in the book "The Management of Savagery".

After the US backed "Free Syrian Army" failed, the US looked for another means to destabilize Syria. They started to fund the Syrian Kurdish militias known as the Peoples Protection Unit (YPG /YPJ). They gave the militias a new name, Syrian Democratic Forces (SDF), and encouraged the secessionist tendency. Meanwhile in Turkey, which has the largest Kurdish community in the region, most Kurds want to have their rights within Turkey and have formed a political party (Peoples Democratic Party - HDP) which unites progressives of all ethnicities. In the 2015 Turkish election this party emerged as the third most popular party and stopped Erdogan's election domination. Currently the HDP is campaigning against Turkey's invasion of Syria. As of 13 October the Syrian Kurdish militias have come to an agreement to work with Damascus to combat the Turkish invasion. The agreement specifies that the Syrian Arab Army will control and defend the entire area from Jarablus on the Euphrates River to the far eastern border with Iraq.

Advocates of US intervention claim that the Kurds were fighting and dying "for us". That is not true. They were defending their own community. To the extent that they accepted and welcomed US air support, equipment, weaponry, etc. it was for their own benefit. There were two parties trying to use each other.

BELOW: Illinois Cogressman Adam Kinzinger (R), a certifiable hawk, invited by CBS disinformer Margaret Brennan to "explain" why we should stay in Syria and why this is an act of betrayal. His words are an apt summation of longstanding US imperialist lies, self-serving exceptionalism, and probably self-delusion about a vital subject.

One of the main justifications for continuing US presence in Syria is "keeping our word" and not "abandoning" the Kurdish forces. This is a favorite rationalization for war. In Cuba, the CIA trained Cuban exiles that attacked Playa Giron "were counting on us". Fortunately, JFK resisted the pressure and said "No". In Vietnam, the US continued the war for a decade because we could not let down our "ally", the government of Saigon. Millions of Vietnamese were killed plus 55,000 US troops because we could not "abandon" a government that in reality was a proxy.

In the Democratic Debates (15 October) Joe Biden said that the withdrawal of US troops from northern Syria was "the most shameful thing any president has done in modern history in terms of foreign policy." This is absurd. Over one million died in Iraq including 4500 and at least 100,000 severely injured US soldiers. Joe Biden was an influential supporter of the 2003 Iraq invasion. Later, as Vice President, he supported the overthrow of the Libyan government. The country is still in chaos with tens of thousands dead. These two countries were devastated by US actions. It is evidence of shameless unaccountability in media and politics that Joe Biden is a serious candidate for President after he destroyed so many lives at a cost of trillions. In the same Democratic debates Tulsi Gabbard was honest and accurate as she said that the plight of the Kurds in northern Syria is "yet another consequence of the regime change war we've been waging in Syria".

Despite the howls of indignation and disinformation, withdrawing US troops from northern Syria is a step in the right direction.

About the author(s)
Rick Sterling is an investigative journalist who has visited Syria several times since 2014. He lives in the SF Bay Area and can be reached at rsterling1@gmail.com
THINK!

Excellent summary, and excellent editorial inserts and comments, he could have gone on a bit longer. I have cut and pasted this piece several times arguing with facebook friends, keep it coming. It is mind blowing, this govt. criminal support for continued illegal presence in Syria.