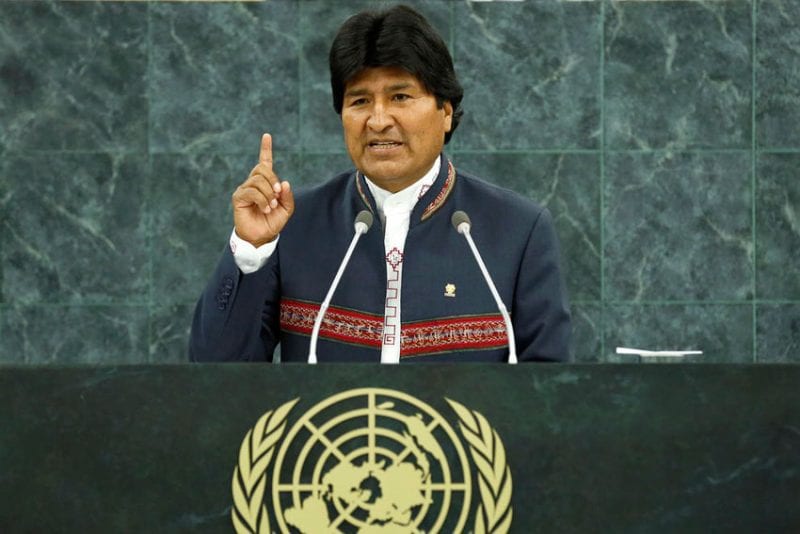 “I don’t want to be the best President in the history of Bolivia, I want to be the President of the best Bolivia in history.” So proclaimed Evo Morales in a pre-election rally a few days before general elections, today, 20 October 2019. At the same time, Evo declared that ever since the Tribunal Constitucional Plurinacional (TCP – Plurinational Constitutional Tribunal) in November 2017 rejected an appeal by the opposition that he could run for a fourth term for President, and approved his candidacy for 20 October elections, US interference on a daily basis has been rampant.

The United States has not stopped trying to change public opinion with false propaganda and making incredibly ludicrous promises to the population. For example, US Embassy people – maybe Fifth Columnists on US payroll, promised the population of the poor Yungas region of Bolivia, new and asphalted roads, if they didn’t support Evo Morales in the upcoming elections. There are also flagrant lies circulating, that Evo and his family had stolen hundreds of millions of dollars and deposited them in a secret account in the Bank of the Vatican. Similar lies as are being spread about Nicolas Maduro, the Castro family, North Korea’s Kim Jong Un, the leaders of Iran and Syria and many more, who oppose the dictates of Washington. 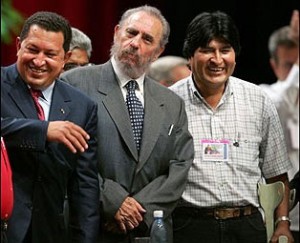 Evo with friends. Bolivia’s President Evo Morales (r) has been an important engine for the new ecosocialist movement in the third world.

The Bolivian Minister of the Presidency, Juan Ramón Quintara, referring to the US attempts to sabotage the elections, mentioned a few days ago on a Bolivian public TV channel, “There is not one day the US is not interfering in Bolivian political internal affairs.” He added, warning his compatriots, “In the last 50 years the United States has put its dirty hand in the Bolivian electoral process. Today the interference is worse than ever. For this reason, brothers Bolivianos, be aware and don’t allow your vote to be highjacked by foreign meddling.”

This is in total disrespect of international law, of international diplomacy and ethics. But what to expect from the only rogue state on our “Mother Earth”. Not to mention the flagrant, aberrant and hardly hidden corruption going on in the current and previous US governments for the last at least 100 years, and the Pentagon’s and White House’s constant interference in elections around the world. It is amazing that anybody would still go for these lies – spread by an emperor who is wheezing on his last breath.

Evo Morales is running for the fourth time with his Vice-President, Álvaro Marcelo García Linera, on the MAS Party (MAS – Movimiento al Socialismo), the Movement for Socialism, for the Presidency and Vice-Presidency of Bolivia. The MAS was created in 1998 by Evo Morales. According to the latest polls, Evo has just under 40% of people’s support, against about 22% of Carlos Mesa, the strongest opponent, who is running second, from the right-wing Civic Community party.

According to Bolivia’s Constitution, with 40% of the votes, the candidate wins in the first round. Evo could indeed, win the election in the first round. However, if he gets less than 40%, they are headed for a second-round run-off election. That’s usually where the dangers lay – that’s where US interference is the most ferocious, in elections worldwide, where they want the winning candidate defeated. Washington spends untold millions in smearing the winning candidate and promoting “their” candidate. And often they are successful. Examples abound. One of the most flagrant one is the 2016 Presidential election in Peru, when in the first round the second candidate from the Socialist Party, the most likely overall winner, was pushed back by election fraud to third place, and the right-wing US-supported candidate was made second – and “won” in the run-off. Today he is under house-arrest, awaiting trial for corruption, linked to illegal business arrangements with the US. 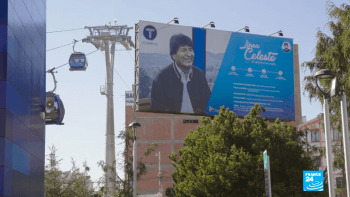 If Evo Morales does not receive the 40% necessary to win the first round, compliments of US interference, it would be the first time in his four runs for President that he would be forced into a second round. He won both the 2009 and 2014 elections with a landslide first round, 61% and 64% respectively.

AlJazeera reports from La Paz, today, in the early morning hours of Election Day, that millions of Bolivians are expected to “cast their ballots amid a climate of uncertainty as President Evo Morales seeks a controversial fourth term.”

Why controversial? – Because the 2009 Constitution allows a President to serve only two terms. But Evo argued that his first term didn’t count because it took place before the new Constitution entered into effect. So, why a fourth term? – Evo realizes that his opposition, especially under his chief contender, Carlos Mesa, would reverse the socio-economic achievements (see below) of the last 13 years.

Mesa would return the country to the IMF austerity dictate of which Bolivia has been free for 13 years – a main reason for Evo having been able to carry out social reforms, not only benefitting all of Bolivia’s “polinational” indigenous people, but also to advance Bolivia in macro-economic terms, i.e. renegotiating and partially nationalizing Bolivia’s gas contracts, reducing foreign debt and amassing huge foreign exchange reserves.

Evo is observing closely what is happening in neighboring Argentina, Brazil, Chile, Peru and Ecuador. It is clear, leaving the elections free without his candidacy, Washington’s dirty hands would manipulate the elections – as they have “successfully” done in the countries mentioned before – to bring in a US favorable candidate, i.e. Carlos Mesa – and the country would be cooked. It is not difficult to foresee such a disaster, just watch what is happening in Argentina, Brazil, Chile, Ecuador and Peru, where poverty and unemployment, and related crime, is rampant.

For a bit of history – Carlos Mena was Vice-President under President Sánchez de Lozada, called “Goni” (August 2002 to October 2003), a businessman, educated by the neoliberal School of Economics of the University of Chicago. Sánchez de Lozada was a built-in representative of Washington, who spoke Spanish with a strong English accent, representing blatantly US over Bolivian interests. He was forced out of office in 2003 by people’s protests over the so-called ‘Bolivian Gas Conflict’ (“Goni” was practically giving away Bolivia’s huge natural gas reserves to foreign petrol corporations, mostly US, for a pittance).

The bloody confrontations forcing Goni to flee the country to the US, claimed the lives of 59 protesters, soldiers and policemen. Goni was succeeded by his Vice-President, Carlos Mesa, who followed in Goni’s footsteps, continuing Goni’s policies on Bolivia’s natural gas. Carlos Mesa, after less than 2 years in office, was also forced to resign in 2005, under incessant people’s demonstrations and protests.

New elections at the end of 2005 brought in Evo Morales, who has presided over the country from the beginning of 2006 to this day. – Watch also the documentary, “Our Brand is Crisis”, depicting how Sanchez de Lozada was made to win the 2002 elections over Evo Morales, by a special US propaganda team – https://www.bustle.com/articles/119572-watch-the-our-brand-is-crisis-doc-online-before-you-see-sandra-bullocks-movie-in-theaters.

A look at Bolivia’s socioeconomic achievements should further convince anybody who thinks for the people, that Evo did very well, insisting on his candidacy for the 2019 elections. The Center for Economic Policy Research (CEPR) in Washington, finds that Bolivia’s remarkable gains have been largely the result of wise policy choices, rather than just a “commodities boom”.

Bolivia was the fastest growing economy in Latin America over the past five years, about 5.2% on average (double the Latin-American average) and was able, under Evo Morales, to reduce poverty by 42% and extreme poverty by 60% since 2006, when Evo took office. The country also ended 20 years of IMF “rule”, by Evo’s eviction of the infamous Bretton Woods institution.

Other remarkable achievements include:

Still lots of challenges remain, as Bolivia still figures as the poorest country in South America, followed by Guyana, Paraguay, Ecuador and Peru. Evo knows that his job is far from finished – and American forced “regime change” is certainly not in order.

The Putin-Nazis Are Coming (Again)!

LIES WHICH THE WEST MANUFACTURES AND THEN CONSUMES

OPINION: Why the Billionaires Love Candidates Such as...