The Arrest of Max Blumenthal

This past weekend, with the arrest of Max Blumenthal, we were reminded again that leftist activism and independent media in the United States are under increasing siege. 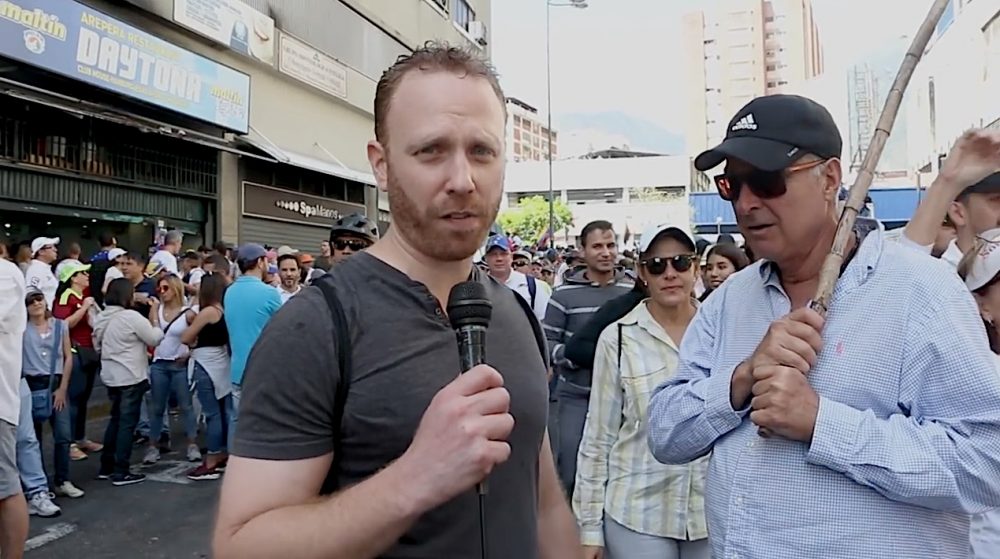 Blumenthal doing actual coverage of Venezuela in the field.

Max Blumenthal is an activist and the founder/editor of The Grayzone, a website that describes itself as featuring “original investigative journalism and analysis on politics and empire.” His body of work has covered diverse topics including US imperialism, the Israeli war on Palestine, and independent media, among many others. But a particular focus for Blumenthal in 2019 has been Venezuela, and this arrest happened within that context.

In January, the United States attempted to engineer a coup in that nation against its legally elected president, Nicolás Maduro Moros, and replace him with Juan Guaidó, a right-wing politician. Corporate media in the US (and Europe, for the most part) had been anti-Maduro since he first took office, so with this set of events they dished out naked propaganda. US politicians on both sides of the aisle called for Maduro’s ouster. A false narrative was quickly sewn up tight with pertinent facts unmentioned, among them: that Venezuela holds the world’s largest proven oil reserves; that US sanctions played a major role in the nation’s economic woes; and that the right-wing opposition was white supremacist.

Conversely, Blumenthal was among a handful of media activists who traveled to Venezuela to uncover the real story. Others included Aaron Maté (also of The Grayzone) and Abby Martin (creator of the Empire Files). These were some of the few figures you could turn to at the time for a non-corporate, on-the-ground presentation of the situation there.

In May, Blumenthal’s coverage of the US campaign against Maduro was centered in the nation’s capital, where Guaidó’s people wanted to take over the Venezuelan embassy, against the wishes of Maduro, but with the explicit blessing of the US (and in contravention of international law). For reasons of safety, Maduro’s staff left the premises, but US activists (including members of Code Pink) occupied the building to prevent a right-wing takeover. (See Blumenthal’s “DC embassy protectors force Guaido’s shadow ambassador to flee in failure as coup flops in Venezuela.”)

Blumenthal was among many activists who sought to support the occupation by showing up outside or by bringing supplies. The right-wing pro-Guaidó crowds, who were encamped outside the building 24/7, harassed those who showed up, sometimes with physical force. DC police ignored such violence, however, and instead arrested activists. Typical.

The charge against Blumenthal is for “simple assault” and was brought against him by one of Guaidó’s supporters at the embassy protests. On this topic, The Grayzone’s Ben Norton writes: “The arrest warrant was five months old. According to an individual familiar with the case, the warrant for Blumenthal’s arrest was initially rejected. Strangely, this false charge was revived months later without the defendant’s knowledge.”

I must mention that Blumenthal is a controversial figure among some on the left. They question the veracity of his journalism because of funding they claim he has taken but not disclosed. He has been accused of accepting money from TV network Russia Today [source], air travel and hotel accommodations from the International Peoples Assembly (a pro-Maduro organization) to attend its conference in February 2019 [source], and the Serena Shim Award, which possibly included cash, as offered by a pro-Assad organization [source].

However, for me, these kinds of allegations only go so far. First, I do not believe that a money trail comprises a complete story. People are often more complicated than that. (Indeed, the author of the piece above about the International Peoples Assembly—who also accepted the gift of travel and accommodations—got bored with the conference, left after two days, and would surely deny that he is a pawn of anybody.) Secondly, the links above also make a few characterizations about other people, organizations or ideas that I either disagree with or know from my own experience are exaggerated or misconstrued as stated (especially the third link) so I am unable to just accept or reject what they say about Blumenthal at face value. I leave it for readers to check out and decide for yourself.

So yes, some people will want to focus on Blumenthal the person, and on whether he is “really” a journalist or is “just” an activist, but you know who doesn’t care about such distinctions? The state, which just snatched him from his home and hid him away incommunicado.

In moments like this–when the boot is coming down on a brother’s neck–we must stand up and protest loudly. Blumenthal’s arrest was intended to intimidate not just him but other activists. A very clear message was conveyed: Criticize US foreign policy and you might end up behind bars.

We will have freedom of expression only as long as we fight to keep it. And we can never let up on that fight. Today, Max Blumenthal is the target, but tomorrow it will be someone else. The target will never be someone who everyone respects, so we will need to guard against letting ourselves be divided and conquered.

ABOUT THE AUTHOR
Kollibri terre Sonnenblume is a writer living on the West Coast of the U.S.A. More of Kollibri’s writing and photos can be found at Macska Moksha Press.

Why is Soviet architecture so often referred to as “soulless”?