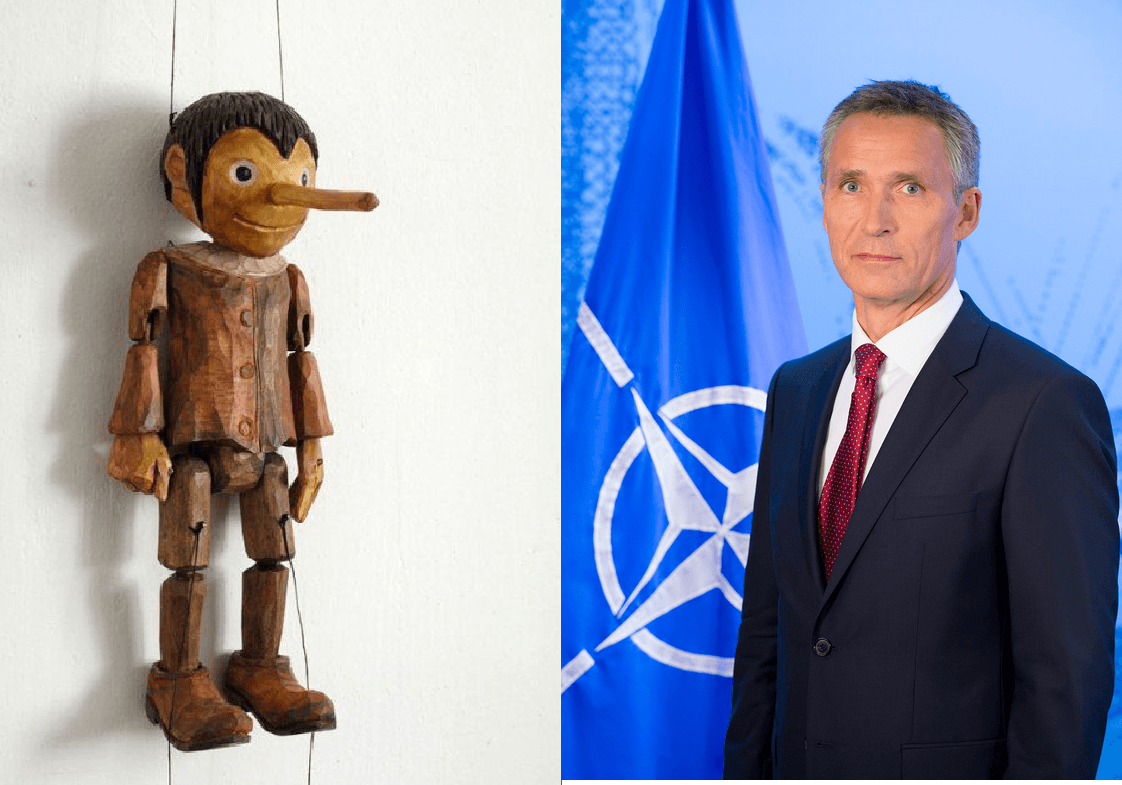 Jens Stoltenberg (60), figurehead leader of NATO, the scofflaw military alliance posing an imminent and continuous threat to world peace – and thanks to his continuous push for increased armaments spending, the social welfare of the member states’ populations – was at it again, reading a long string of fibs from speech notes prepared by his masters in the dark corridors of Washington’s military-industrial complex.

«Let me start by taking you back to 1979. At that time I was doing my military service [..] And I remember very clearly the exercises we conducted to protect ourselves against a nuclear attack. [..] I was taught [..] to ‘duck and cover’. In case we survived the initial blast, we actually had a brush to clear the radioactive dust as quickly as possible from our clothes. So that’s the way we prepared for a nuclear attack in [..] 1979.» His moral awareness has clearly deteriorated since then, irresponsibly playing a game of chicken with nuclear powers Russia and China, brushing off the dangers of an apocalyptic war.

«As we all know, the deployment of U.S. missiles [in the early 1980’s] was controversial. Protests shook the political landscape across the whole of Europe.  But in the end, this [..] decision prepared the ground for the INF treaty. And when the treaty was signed in 1987, we all felt safer. And we were safer. So arms control matters. It enhances our security. «Incoherent facts and halting logic to defend the indefensible. He actually states that filling Europe with nuclear missiles enhanced its safety, and that the past irresponsible folly was the reason for  the INF-treaty. In historical fact, the INF-treaty was only made possible by Soviet leader Mikhail Gorbachev, when he made very deep unilateral concessions in the interest of world peace.

"To even suggest that China poses a security threat to Europe is pure chutzpah. The US wants to drag Europe into an economic and military conflict on the other side of the earth..."

«China already has hundreds of missiles with the range that would have been prohibited by the INF treaty.» Is he a scoundrel or just a fool? Chinese intermediate missiles (treaty range 3,420 miles) can only theoretically reach Europe, nor as a matter of fact can they reach the US mainland (6536 miles).

«And recently, [China] put on display an advanced intercontinental nuclear missile able to reach the United States and Europe.» Hypocrisy and false outrage. In case of a thermonuclear war, since the 1950’s – long before the Chinese developed nukes – the US planned to incinerate the biggest Chinese cities with a mix of missiles and bombers, killing hundreds of millions. These plans have never been shelved, and are continuously upgraded with new weapons systems.

To even suggest that China pose a security threat to Europe is pure chutzpah. The US wants to drag Europe into an economic and military conflict on the other side of the earth. Leave alone the fact that the US empire has no legitimate military reasons for ‘flexing it s muscles’ so far from home, threatening world peace in yet another arena – Europe certainly has no military outstanding issues with China.

«Emerging technologies are also changing the game. Arms control has traditionally been about counting warheads, controlling numbers and distances. […] Cyber, hypersonic glide, drones, autonomous weapon platforms, artificial intelligence and biotech.» Blatant hypocrisy. He is 100% correct when he states «in general, their military use is not constrained by international rules and regulations.» What he leaves out, is the salient fact that the US/NATO alliance has refused to even consider negotiations regarding rules and regulations of these issues, like a convention regulating cyber-warfare, or the urgent need for a strengthening of the inspection regime in the Biological warfare convention, which his master, the US military-industrial complex, is blatantly in breach of, posing a threat to all mankind.

«And we need to consider how to develop new rules and standards for emerging technologies, including advanced missile technology.» He wants his opponents to disarm in areas where they are equal or superior. When they have promptly laid down their arms, they will be ruthlessly attacked without fear of retaliation, just like Stoltenberg did as Prime Minister, when he attacked and destroyed Libya in 2011, a high crime, where he, according to the principles laid down in the Nuremberg trials after WW2, is responsible for everything that happened there since, a great humanitarian disaster.

And speaking of the Nuremberg principles, they state «It is not an acceptable excuse to say ‘I was just following my superior’s orders’» – a principle which he should reflect on, being a cog in Washington’s war machinery for total world domination.

«NATO’s goal is a world without nuclear weapons.» Joseph Goebbels said the best way to make a lie stick, is to repeat it. But saying it over and over does not make it true.

«The fundamental bargain of the NPT remains sound: that all states will work towards general and complete disarmament – so a world without nuclear weapons. All states will work to prevent the spread of nuclear weapons. And all states can access the benefits of the peaceful uses of nuclear energy.» Liar. All states except Iran, which he and his masters have tried to hinder from its inalienable right to develop the peaceful use of the atom, as stated in the NPT he quoted from. This attempt at sabotage is on its own a breach of the Non-Proliferation Treaty.

«Russia’s negative record on arms control goes beyond the INF Treaty. It suspended its participation in the Conventional Forces in Europe Treaty back in 2007.» A core propaganda method is to leave out relevant facts and history. In 2004, the US created missile bases in Romania and Bulgaria, which according to the – entirely reasonable – Russian view, constitute a breach of the treaty. NATO officials – Stoltenberg’s predecessor stooges – disputed this and said that the US bases were not intended as permanent and thus could not be seen as a breach. We are in the year 2019, and the bases are still there. As is ‘rotating’ US/NATO forces all along the Russian borderlands, and NATO tanks two hours drive from St. Petersburg, Russia’s second city.

«Which highlighted the two main functions of NATO. One is to deter aggression and defend alliance territory. The other is to seek dialogue» – In 2014, NATO cut off all contacts with its eastern neighbour through the Russia-NATO Council, and as good as all other areas. Even though the Council was restablished in 2017, it is an empty shell, in effect leaving no mechanisms to create dialogue or reduce tensions.

NATO Allies remain firmly committed to the preservation of effective international arms control, disarmament and non-proliferation. – claims that beggar belief from a figurehead of an alliance making no effort at arms control. His chief function is the opposite of disarmament, being an errand boy, running around cajoling the European ‘allies’ to increase their armaments budgets whilst having a slightly more credible spiel in his salesmanship than his masters in the military-industrial complex and the US deep state.

TERJE MALOY,  Special Contributing Editor • Terje Maloy is a Norwegian citizen, with roots north of the Arctic Circle. Nowadays, he spends a lot of time in Australia, working in the family business. He has particular interests in liberty, global justice, imperialism, history, media analysis and what Western governments really are up to.He runs a blog https://midtifleisen.wordpress.com, mostly in Norwegian, but occasionally in English. He likes to write about general geopolitical matters, and Northern Europe in particular, presenting perspectives that otherwise barely are mentioned in the dominant media (i.e. most things that actually matters).
THINK!

A Deeper Look At Uprisings Around The World