KALASHNIKOV: A humble Russian engineer gave the world the most reliable assault rifle in modern history. 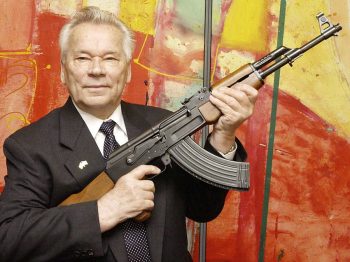 Mikhail Kalashnikov, with an AK-47, the most admired light assault weapon in modern history.

The AK-47 is an important weapon because it enabled some of the poorest countries to arm their fighters with a first-class field weapon in their struggles against the empire.

RT
The Kalashnikov rifle needs no introduction. In this documentary we'll show you its origins, how it's made and tested, who uses it and much more. You'll be taken to the Izhmash manufacturing plant where the rifles are assembled, see elite soldiers from Russia's Interior Ministry train with the world-renowned weapon, and hear American war veterans recall their experiences with the gun. The inventor of the iconic AK-47 assault rifle, Mikhail Kalashnikov, has died at the age of 94

Now be sure to share this article with friends, kin and workmates! Fighting the empire starts when you neutralise its shameless lies.
About the author(s)
Notes by the editors.