Home AMERICAN STUDIES (Burying) ‘ The Salt of the Earth’ 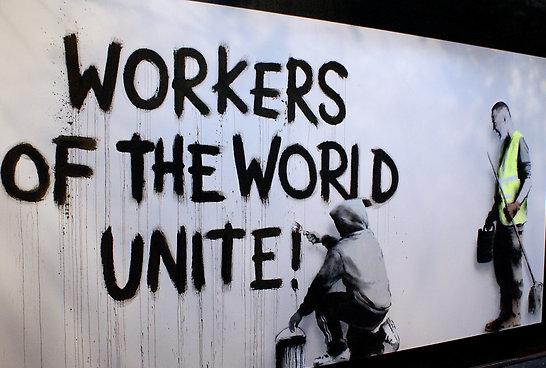 The Rolling Stones created a great and meaningful song 'The Salt of the Earth' in 1968:

Say a prayer for our hard fighting soldiers
Give some thought to their life-risking work
How about a prayer for their spouses and children
They keep the homefires burning and still till the earth.

And when I search the faceless crowd
A swirling mass of gray, black and white
They don't look real to me
In fact, they look so strange.

Raise your glass to the hard working people
Let's drink to the uncounted heads
I wanna make a toast to the wavering millions
We need leaders but get gamblers instead.

Spare a thought for the stay-at-home voter
Whose empty eyes gaze at reality shows
And a stream of gray suited grafters
Give you a choice of cancer, HIV or who knows.

And when I look into the faceless crowd
A swirling mass of grays, black and white
They don't even look real to me
In fact they look so strange.

It seems that nothing has changed for the better for we working stiffs since the year that song came out  (1968). Actually, things are now worse! Union membership was at 31.5% in 1950, regressing to 27.3% in 1970. This was the total of public and private sector unions. The public sector has remained steady with over 33% membership in 2018. However, private sector union membership has fallen to its lowest number in over a half century at 6.4%. Translated: over 93% of us who work for private interests have NO representation at the bargaining table, IF there is even one! Is this " Keeping Amerika Great" ? For whom?

The supermarket cashier, someone who has never shown any sort of political thinking the many times I chatted with her over the years, summed it up best the other day. Out of seemingly nowhere, she volunteered the info about her store: " 90% of our cashiers are part time. I have been full time since I started working here years ago. Some of these people have to work anywhere from two to three part time jobs to stay above water. That's the reality in our country now."

When I go on one of my early morning walks in my central Florida neighborhood, I see a stream of cars from before 7 AM right up until 9AM. People going to work, many with full or part time jobs with little or no benefits... or job protection. You see many of these same folks at the supermarket from 4 PM to 7 PM buying groceries after a day's work...many with tired faces and expressions. Working stiffs like my ex wife many years ago, had to raise two ' Latchkey sons'. There were very few after school programs for my sons in those days...now it is even worse. When this writer was a child, we not only had after school activities but a ' Night Center' that operated in the early evenings. The gymnasiums were open for kids to play ball or other games that young people play. Today, the kids stay at home playing video games or on facebook etc.

The main brunt of this empire's tactics is to instill this ' Dog eat Dog' mentality into we working stiffs. The ' Every man for himself' attitude is prevalent. Working stiffs may go out together after work for a few drinks or a meal, but there is NO ' Union of many ' mentality when it comes to the job. We are told to ' Accept it or....' . This writer has been employed on straight commission for most of his adult life, with NO union, No contract. Thus, my merits were the only thing keeping me employed. If I was not making my bosses enough profits, I was OUT... period! This is what many working stiffs are forced to abide with.

The late and great Col. Bob Bowman, Vietnam era Navy pilot, had his own epiphany many years ago. He realized that the war he was fighting in was unjust and immoral. Col. Bowman became a staunch anti war activist and was outspoken about 9/11 Truth and the Iraq invasion. He realized what this empire was all about: Greed, power, control and selfishness. Fourteen years ago Col. Bowman ran for Congress in Florida. I had him as a guest on my radio interview show. We covered 9/11 Truth and the phony Iraq War. After the show we went for lunch. I asked him his feelings on the economy and the Stock Market. I'll never forget what he answered me: " Philip, it's easy to understand. When wages are up the Stock Market is down. When wages are down the market goes up. Period. "