Fox News' Tucker Carlson, of all people, not any of the many liberal pundits disgracing the US media, is the one to offer Jimmy a welcoming platform to his show for this badly needed analysis. Good that Jimmy is thereby able to show some working class people that radicals are an option, and that liberals are simply traitorous scum (as they assumed all along, albeit for rather confused reasons). 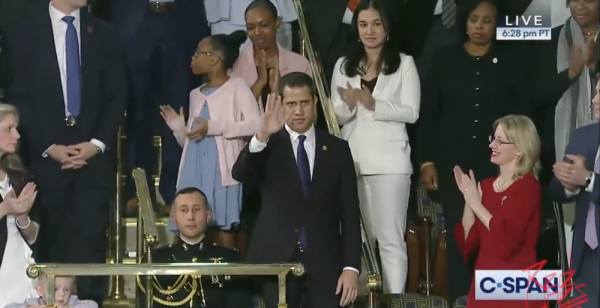 Trump and the Deep State have no decency whatsoever, so a raw publicity stunt like dragging puppet Juan Guaido out to Washington, plunking him down in the middle of SOTUS, just to rub in the idea the man is the "true president of Venezuela," is par for the course among the bipartisan mafia that runs America.

While Pelosi rips Trump's speech, ostentatiously scoring points with the easily impressionable and the rank ignorant, she's 100% behind Trump when it comes to really serious matters, like attacking Venezuela to steal its oil and hand it over to US oil companies and the super rich guys who own them. It's called imperialism, of the naked kind, and about that, there is no disagreement between the "two" parties.

“BERNIE WILL NOT BE PRESIDENT!” Says Chris Matthews

Chris Matthews, ever self-seeking, is one of those guys that clearly has long exhausted his welcome, not to mention the patience of rational and decent people everywhere. A verminous courtier to both wings of the establishment, wrapped in a thick coat of liberal sanctimony and putative wisdom,  Matthews is simply a disgrace, yet there he is, like the rest of his ilk,  polluting the still gullible minds who happen to watch him, while drawing big checks and lining his pockets with pseudo scholarly books that are as pretentious as the man who penned them. The sooner America is rid of his class, the better for the nation and the world.

ABOUT THE AUTHOR
The post was collated by the editor.

‘Which Side Are You On?’: Sanders Calls Out Buttigieg for Raking in Billionaire Donations

Who Can NOW Say America Hasn’t Become a Mega-Corporate Dictatorship?