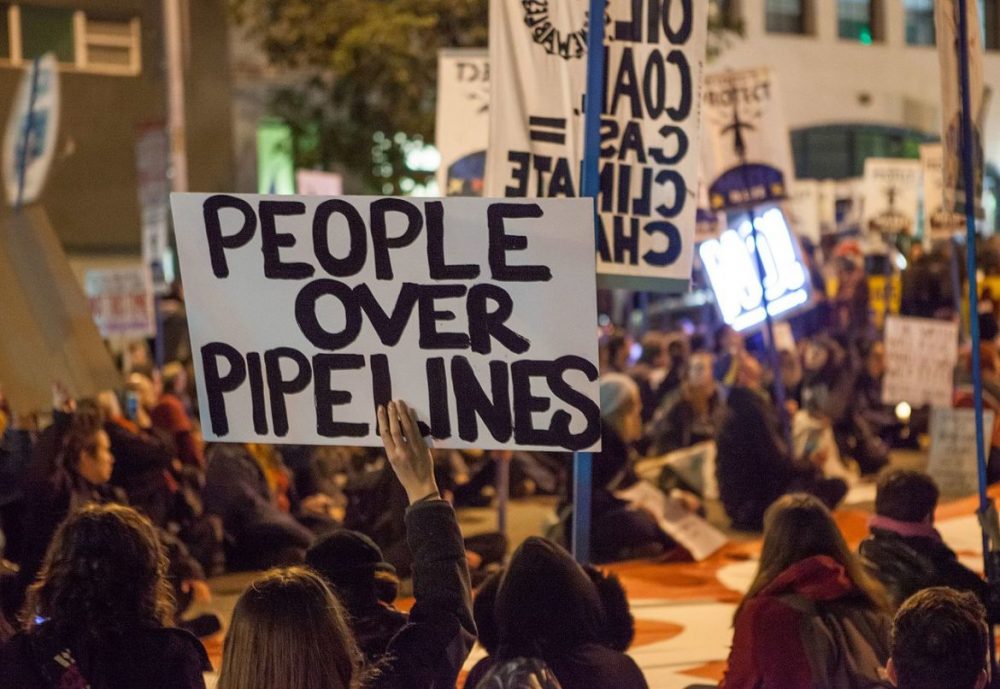 Pipeline protest. What we witness in the US now is the broad daylight systematic murder of free speech by a thousand cuts.(Pax Ahimsa-Wikimedia)

Activists say a bill advancing in the Ohio legislature could criminalize activities such as offering rides, water or medical aid to anti-pipeline protesters.

Even chanting “stop the pipeline” could be construed as encouraging damage to critical infrastructure under the bill’s vague language, critics say.

Trespass, willful destruction of property and various other actions are already crimes under Ohio law. But Ohio Senate Bill 33 calls for heavier penalties for trespass or property damage that might affect “critical infrastructure.” The Ohio Senate passed the bill last spring, and the House Public Utilities Committee reported out a substitute version on Jan. 30.

About half the critical infrastructure facilities covered by the bill would fall into those categories, said Ted Auch, Great Lakes program coordinator for the FracTracker Alliance. He made that estimate when a similar bill from sponsor Sen. Frank Hoagland, R-Mingo Junction, was pending in 2018.

“This is not a necessary bill,” Auch said, noting that Ohio law already imposes liability for various trespass and property crimes.

Critics say the bill’s heavier criminal penalties for individuals and its vicarious liability for organizations could have a chilling effect on First Amendment rights to freely speak and assemble.

“Controversial infrastructure projects are far from the only public policy issues that generate mass mobilization, public protest, and deeply felt political expression,” said Elissa Yoder Mann, conservation manager for the Ohio chapter of the Sierra Club, in her Jan. 28 testimony against the bill. “However, individuals and organizations who engage in similar activities on other political issues would not be subject to the same standard of financial and criminal liability.”

For example, tampering with a “critical infrastructure facility” would be a third-degree felony. The potential prison term of up to three years would be two to three times as long as sentences for similar actions in other contexts, which might be no more than a fourth- or fifth-degree felony.

Several of the bill’s terms may also be unconstitutionally vague. For example, the bill forbids anyone from improperly tampering with critical infrastructure, defined to mean changing its location or physical condition.

“What about a temporary change to the surface of the property, such as graffiti [on] a pipe?” asked Rev. Joan VanBecelaere, executive director of Unitarian Universalist Justice Ohio in her testimony against the bill. “Does that constitute a change to its physical condition? Do we really want to charge people with a felony for non-violently putting graffiti on a pipe?”

Critics also worry about the bill’s vicarious liability provisions, which could hold an organization liable for 10 times the maximum fine that could be imposed on an individual. Ten times the fine for a third-degree felony could be as much as $100,000.

The bill reported out of the House committee states that vicarious criminal liability won’t be imposed if an organization pays someone’s bail, fines or court costs. However, its language would allow prosecution if a group “directed, authorized, facilitated or encouraged” someone to cause damage to a critical infrastructure facility.

Tampering with a “critical infrastructure facility” would be a third-degree felony. The potential prison term of up to three years would be two to three times as long as sentences for similar actions in other contexts, which might be no more than a fourth- or fifth-degree felony...(Similar draconian laws are being passed against factory farms protesters)
That “extremely vague” language could include groups that organize events, as well as those “who ‘facilitate’ protesters by providing water or medical aid, or who ‘encourage’ protesters by distributing materials that amplify the message,” VanBecelaere said. Even chanting “stop the pipeline” could lead to guilt by association, she suggested.

Posting flyers about protests on utility poles could also “be considered unlawful, because a telephone pole is considered critical infrastructure,” said Jen Miller, director of the League of Women Voters of Ohio when the bill was before the state Senate last year. Some bill language could also intimidate whistleblowers, she said.

Their concerns are backed up by a September 2019 federal court decision, granting a preliminary injunction against a South Dakota law that had similar language. That case was dismissed after the state agreed not to enforce the provisions the court viewed as impermissibly vague.

Eshenbaugh claimed that the prohibition against improperly tampering with critical infrastructure was “simply a derivation of the current criminal mischief statute.” However, his testimony did not explain why stricter penalties should be necessary if an action takes place in a protest situation. Nor did he address the vagueness of terms such as “facilitate” or “encourage.”

SB 33 is widely viewed as aiming to deter opposition in the wake of the Dakota Access Pipeline protests a couple of years ago. At least nine other states have passed similar laws since 2016, according to the International Center for Not-For-Profit Law.

The House committee’s reporting the bill out sets the stage for a full vote on the House floor. That could happen as soon as Speaker Larry Householder, R-Glenford, puts it on the agenda.

The stakes have never been higher

As attacks on women’s rights, health care, the environment and democracy intensify, we’re going to need truth-telling journalists more than ever.

At Truthout, unlike most media, our journalism is free from government and corporate influence and censorship. But this is only sustainable if we have your support. If you like what you’re reading or just value what we do, will you take a few seconds to contribute to our work?

ABOUT THE AUTHOR
Kathiann M. Kowalski began writing for Midwest Energy News as a freelancer in April 2013 and became a journalism fellow in March 2014. As the author of 25 books and more than 600 articles, she writes often on science and policy issues. In addition to her journalism career, Kathi is an alumna of Harvard Law School and has spent 15 years practicing law. She is a member of the Society of Environmental Journalists and the National Association of Science Writers.

PRESSTITUTES: IN THE PAY OF THE CIA- A CONFESSION FROM THE PROFESSION. BOOK INTERVIEW WITH JOHN-PAUL LEONARD AND ANDREW SCHLADEMAN.