February 17, 2020
Please make sure these dispatches reach as many readers as possible. Share with kin, friends and workmates and ask them to do likewise.

Dreyfuss in retirement. The forces his case stirred up are still with us, the issues unresolved because nothing can be truly fixed under capitalist rule.

On Thursday, the board of France’s César film awards collectively resigned after coming under relentless attack from the #MeToo campaign and the French government for nominating Roman Polanski’s film on the Drefyus Affair, J’Accuse, for 12 awards at the upcoming February 28 ceremony.

The Dreyfus Affair remains a critical dividing line in French and European politics. It was a 12-year struggle to clear Captain Alfred Dreyfus, a French Jewish officer falsely convicted of spying for Germany in 1894. France came to the brink of civil war between defenders of Drefyus, led by Jean Jaurès and the socialist workers movement, and the antidreyfusards—the Army general staff, the Church and the anti-Semitic Action française led by Charles Maurras. Dreyfus was ultimately cleared and the conspiracy to frame him definitively repudiated in 1906.

The Action française went on to provide the ideological foundations, and much of the personnel, for the collaborationist Vichy regime during World War II, which oversaw the deportation of a quarter of French Jews to Auschwitz and other Nazi extermination camps. 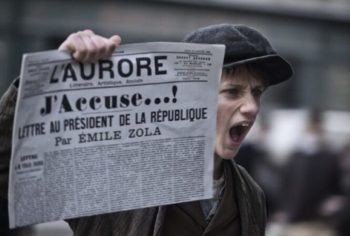 J’Accuse is a powerful, compelling film about this great opening battle in the struggle between socialism and fascism in the 20th century. It brings to life Colonel Marie-Georges Picquart, an officer who overcomes his anti-Semitic prejudices as he finds decisive proof of Dreyfus’s innocence and provides evidence central to efforts by the renowned novelist Émile Zola to clear Dreyfus. A highlight of the film is the reading of much of Zola’s open letter to the president of the Republic, “J’Accuse” (I accuse), indicting top army officers who lied to frame Dreyfus.

This is among the greatest films made by Roman Polanski, a Franco-Polish Jewish director whose distinguished filmmaking career now spans more than a half-century. Born in Paris in 1933 and raised in Cracow, Polanski lived through the imprisonment of his parents and sister in Nazi death camps in World War II, as well as the murder of his wife, actress Sharon Tate, in 1969. After pleading guilty to unlawful sex with a minor, Samantha Geimer, and serving 42 days in jail in 1977, he fled the United States when a judge threatened to unlawfully break the terms of a plea deal. Since then, he has been mercilessly pursued by US police authorities and feminist groups.

There is nothing legitimate about the campaign to suppress J’Accuse. The legal and political consequences of such censorship extend far beyond its impact on Roman Polanski. By attacking J’Accuse, the #MeToo campaign is serving as an instrument of a reactionary attack on freedom of expression and working to install official state censorship of filmmaking and promote a repressive political atmosphere.

From the beginning, the #MeToo campaign against J’Accuse had a fascistic odor. Just before the film came out in November, actress Valérie Monnier suddenly published unsubstantiated accusations, which she had already discussed privately with state officials for a year, that Polanski had raped her in 1975. #MeToo groups then claimed that those seeing or expressing interest in the film were “complicit” in rape. Given the vast historical weight of the Dreyfus Affair, this is tantamount to asserting that anyone with left-wing views in France supports rape.

The film shot to the top of the French box office despite #MeToo attacks against it and criticism from several ministers. And so, when the #MeToo movement objected last month to the César board’s decision to name J’Accuse for awards, including best picture and best director, President Alain Terzian dismissed the objections. He stated: “The César awards are not an institution that must have moral positions. Unless I am wrong, 1.5 million French people went to see this film. Ask them.”

#MeToo responded by stepping up its offensive against J’Accuse. The “Dare To Be Feminist” association, closely linked to Macron and to Jean-Luc Mélenchon’s Unsubmissive France party, circulated a petition demanding the César board “not give awards” to J’Accuse. It asserted: “Two years after #MeToo, while in the United States Harvey Weinstein faces life in prison, in France we are acclaiming and celebrating a violent pedocriminal who is on the run.”

César President Terzian briefly tried to save his position by deciding that the organisaton would recruit hundreds of women to the board and implement a strict female-male parity in awards and positions. But denunciations of Polanski as a “rapist” and against the Césars for promoting “rape culture” kept raining down, until the entire leading body of French cinema was thrown out.

J’Accuse has no distributors in either America or Britain, where #MeToo has effectively banned it. After attending a secret showing of the film in Britain, John R. MacArthur of Harper’s Magazine wrote: “So dangerous is the potential backlash of collaborating with Polanski that no British or American distributor will risk showing the movie, which opened to great acclaim and box office success in France… No one, including my hosts, wants to be stoned on Twitter or picketed in their place of business.”

#MeToo’s role exposes the interaction of petty-bourgeois identity politics with the agenda of capitalist governments. Promoting gender politics in opposition to class politics, #MeToo has relentlessly moved to the right.

Macron has reacted to 16 months of mass strikes and Yellow Vest protests against its overwhelmingly unpopular pension cuts and tax cuts for the rich by cultivating far-right police forces to assault protesters. Since Macron hailed France’s Nazi-collaborationist dictator Philippe Pétain as a “great soldier” in 2018, police have arrested over 11,000 people, wounded nearly 5,000 and killed two.

Knowing itself to be hated, the Macron government is seizing upon #MeToo to promote censorship and build a middle class base for its repressive policies. #MeToo has not criticized growing police assaults on protesters. Instead, it has demanded stepped-up state control of public life and an increase in the proportion of better-paid jobs given to women.

Just after the César award nominations were announced, Woman-Man Equality Minister Marlène Schiappa toured the media to orchestrate the attack on J’Accuse. Asked on LCI whether the Césars are “complicit in rape culture,” Schiappa said French cinema has not “matured in terms of sexist and sexual violence towards women.” She said she was “shocked” at Terzian’s defense of J’Accuse and that she would be “indignant” if the film won awards.

Through #MeToo’s attack on Polanski and the disciplining of the Césars, the French government is targeting all cinematic expression of left-wing opposition. Schiappa denounced Ladj Ly, the Franco-Malian director whose film Les Misérables on police violence in working class neighborhoods is named for 11 César awards. Claiming there is “no difference” between Polanski and Ly—that is, that Ly should not receive any awards, either—Schiappa said she was “surprised” that Ly is “praised to the skies.”

Culture Minister Frank Riester, whose ministry sought to publish the writings of the nationalist and fascistic figure Charles Maurras in 2018, hailed the ouster of the Césars board over J’Accuse as a “wise decision.”

#MeToo is a reactionary petty-bourgeois movement providing “feminist” cover for far-right, racialist forces. It is worth noting that three of #MeToo’s main targets in the movie industry—Harvey Weinstein, Woody Allen and Polanski—are Jewish.

ABOUT THE AUTHOR
Alex Lantier writes for wsws.org, a Marxian publication.

Painting A True Christ: A Review of Terrence Malik’s Film “A Hidden Life”

That only shows, how much better the world would be, if women were in charge!