Dresden Terror Bombing, Like Hiroshima, a Maniacal Warning to Moscow

[dropcap]T[/dropcap]his weekend 75 years ago, the German city of Dresden was razed to the ground by British and American aerial bombardment. At least 25,000 mainly civilians were destroyed in raid after raid by over 1,200 heavy bombers, indiscriminately dropping high explosives and incendiaries. It took seven years just to clear the rubble.

The destruction of Dresden, a world-famous cultural center of Baroque majesty, has been long dogged by controversy. Official British and American military accounts claim it was necessary to hasten the collapse of the Third Reich; with a reasoning that resonates with US claims for dropping the atomic bombs on the Japanese cities of Hiroshima and Nagasaki in August 1945.

Critics say, however, that the mass bombing of Dresden was immaterial in the effort to defeat Nazi Germany. It was a wanton act of terror – a war crime – carried out by the British and Americans. Critics point out that most of the industrial and military targets on the outskirts of the beautiful city were largely left untouched by the bombing. British wartime leader Winston Churchill is even said to have expressed misgivings about the morality of this and other indiscriminate bombing of German civilian centers.

Ardent advocates of the terror-bombing campaign said it would exhaust German morale. A classic case of ends justifying means, no matter how vile the means.

There were also claims at the time that the damage to Nazi communication and transport lines would aid the advancing Soviet Red Army.

But there is good reason to believe that the rationale for the obliteration of Dresden was for an altogether more sinister reason. It wasn’t so much an act of terror aimed at Nazi Germany, but rather a show of maniacal power to the Soviet Union.

A British Royal Air Force memo on the Dresden operation noted that it would “show the Russians when they arrive what Bomber Command can do.” (See caption 17 in this linked photo essay.)

By mid-February 1945, the front lines of the Western and Eastern allied forces were such that the American and British ground troops had not yet entered Germany territory, while the Soviet Red Army had crossed the Oder River and were a mere 70 kilometers from Berlin, the seat of the Third Reich. Such was the keen advance of the Soviets that the Western allies were concerned that the Red Army might take all of German territory.

Rather than aiding Soviet forces from the mass bombing of Dresden, Leipzig and other cities in the German east, it seems plausible that, as the above British RAF memo indicates, the Western allies were intent on demonstrating a shockingly brutal, raw power to Moscow. Not just military power, but a will power to use any means necessary to defeat enemies. 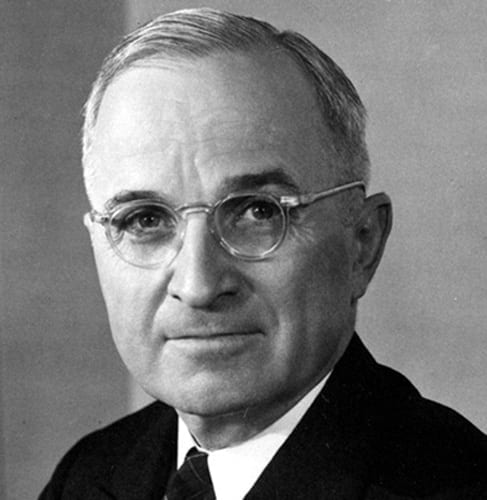 An eager anticommunist, Missourian Harry Truman was one of the great war criminals of the 20th century, perhaps all time.

There is a direct analogy here with the subsequent atomic bombing of Japan. At the Potsdam conference in July 1945 following the defeat of Nazi Germany and the carve-up of Berlin, giving the Western allies shared control of the German capital way beyond their final front lines, the American president Harry Truman relished the ability to drop a sinister hint to Josef Stalin about a newly acquired secret weapon – the A-bomb.

As with the earlier British and American bombing of Dresden and other German cities, there was arguably little military justification for dropping the atomic weapons on Hiroshima and Nagasaki on August 6 and 9. Like Dresden, the military significance of those cities was dubious. The death of 200,000 civilians from the atomic inferno was not a military necessity for defeating imperial Japan, as Truman’s top generals MacArthur and Eisenhower were advisinghim against.

So if the bombing of Hiroshima or Nagasaki was unnecessary from a military point of view to end the Pacific War, why was it done?

As with Dresden, the point was a monstrous display of terror by Western powers to let the Soviet Union know that nothing would be off-limits in the postwar geopolitical stand-off that was anticipated and which became the Cold War.

When the A-bombs were dropped on Japan, Stalin was said to have been frozen by reports of the awesome new destructive power. The Soviet Union was not to develop its A-bomb until 1949.

The terror unleashed at Hiroshima and Nagasaki seems to have had the intended effect of halting Soviet Red Army advances that were being made into the Korean Peninsula and onwards to Japan. The American troop lines were relatively remote by comparison with their Soviet counterparts, yet after the A-bombing the US was catapulted to take over both Asian-Pacific territories in the postwar period. Not unlike the precocious territorial gains that were acquired by the Western allies in defeated Nazi Germany.

Thus the moral controversies about the British and American bombing of German and Japanese cities goes way beyond arguments about the right or wrong of mass murder for the supposed purpose of ending wars. That moral hazard is difficult enough. But even more fiendish is a bigger picture; one in which the cold, calculated use of terror and genocide is not about ending war, but rather to simply exert geopolitical power against a perceived rival in the postwar era. Terror for terror sake, evil for evil sake.

A final note: it has become fashionable to falsify the Soviet victory over Nazi Germany by claiming that the Red Army became an occupying tyranny in eastern Europe after the war’s end. Suffice to say that if the Soviets committed even a fraction of the crimes that were actually carried out by the Americans and British from their aerial bombing of civilians in both Germany and Japan, one would never hear the end of deafening Western condemnations against Moscow to this day, and for decades to come.

About the author(s)
Finian CUNNINGHAM is a former editor and writer for major news media organizations. He has written extensively on international affairs, with articles published in several languages.

Understanding why they lie and why they get away with it

COULD THE LATEST OUTBURST OF ANKARA’S TEMPER LEAD TO ESCALATION IN SYRIA?

side effects of tadalafil https://cialisbusd.com/