The lead editorial in Tuesday’s edition of the New York Times carries a caricature of Harvey Weinstein, the film producer convicted Monday of felony sex crimes, with overtly antisemitic overtones. Weinstein is Jewish.

The image of Weinstein published by the New York Times takes up one-quarter of the usable page space in the first page of the editorial section in the print edition of the newspaper. The editorial associated with the image is titled “The Lessons of #MeToo’s Monster.” The editorial celebrates the conviction of Weinstein despite substantial exculpatory evidence. 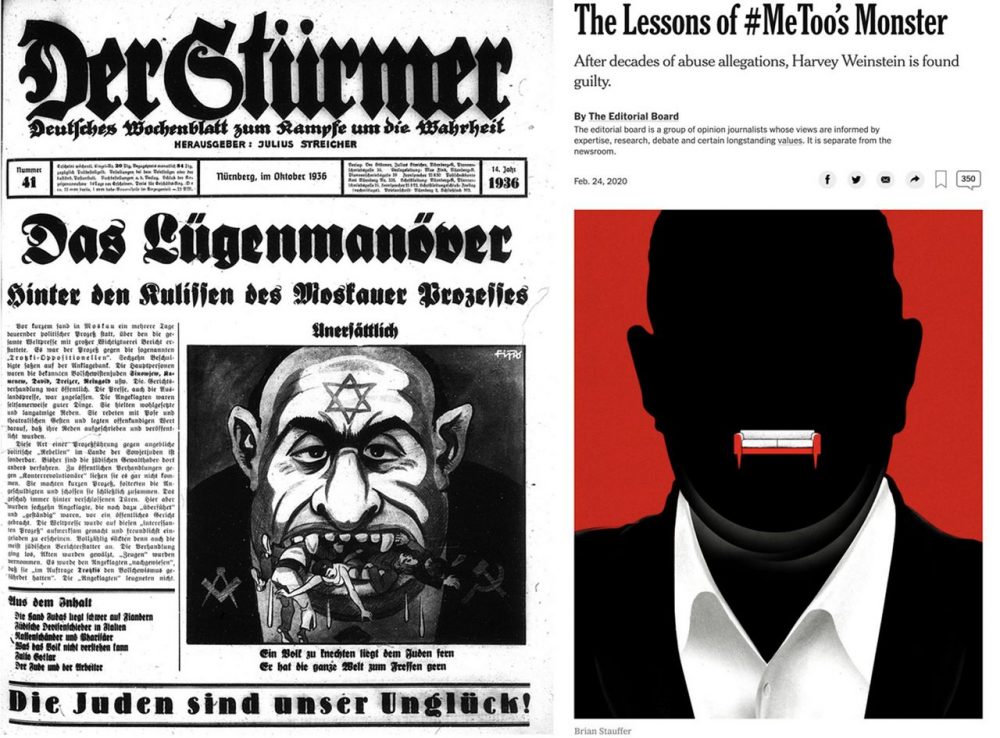 Left: An October 1936 edition of Der Stürmer | Right: A screenshot of the New York Times lead editorial on Weinstein. The NYTimes has been in the forefront of the push to establish identity politics and the entirely bourgeois feminist #metoo movement as the correct expression of women's oppression.

The caricature of Weinstein, drawn by Brian Stauffer, is strikingly similar to an infamous image appearing in an October 1936 issue of the Nazi propaganda magazine Der Stürmer. The anti-Semitic insinuations of the illustration are in keeping with an overt anti-Semitic subtext that has been one of the many ugly elements of the #MeToo campaign, which has also targetted Roman Polanski and Woody Allen.

The black-and-white image in Der Stürmer is a hideous anti-Semitic caricature of a Jew, with two protruding fangs, dripping either saliva or blood. The monstrous visage depicted in the Stürmer image has a weak jaw, multiple chins and exaggerated ears. The Stürmer depicts this figure eating people, including a centrally located woman, under the title, “Insatiable.” The caption reads, “Far be it from the Jews to enslave a single people. Their goal is to devour the entire world.”

Stauffer’s image appears to be a striking adaptation of the Nazi caricature. With a red-and-white “casting couch” forming his mouth, the New York Timesillustration depicts Weinstein with a weak jawline, multiple chins and prominent ears. The legs of the “casting couch” point downward in the form of two fangs, and his mouth, depicted as the frame of the couch, is colored in dark red, giving the distinct impression that it is dripping with blood.

The ghoulish illustrations bear so many common features that it is difficult to believe that Stauffer is unfamiliar with the Nazi caricature. But it does not follow from this that Stauffer is an anti-Semite, or that he consciously intended to draw an anti-Jewish caricature. And it happens to be the case that the publisher of the Times is Jewish, as is the editor of the paper’s editorial page, James Bennet. However, reactionary politics, when it seeks to express itself in a quasi-artistic pictorial form, is drawn to, and quite naturally employs, imagery of a socially backward and even bestial character.

Intellectually impoverished, incapable of understanding and portraying contradiction, Stauffer works with the most simplistic and vacuous categories. Just as Nazi imagery, in keeping with its political inspiration, could portray the Jew only as a horrifying personification of all evil, Stauffer reduces Weinstein to a devil-monster, with fangs protruding from a mouth dripping with blood.

He does not portray a real human being, riven by contradictions. The Nazi imaginary image of the "Eternal Jew" is morphed, without artistic originality, let alone a trace of psychological insight, into Weinstein as the "Eternal Monster." Inevitably, the presentation derives its inspiration from the well known tropes of anti-Semitism. This manifestation of cultural backwardness intersects with the reactionary political interests of the New York Times, and that is why Bennet plastered the image over one-quarter of the editorial page.

About the Author
The writers are senior editors of wsws.org, a Marxian publication.