After Super Tuesday primaries, Warren drops out, Sanders tacks to the right 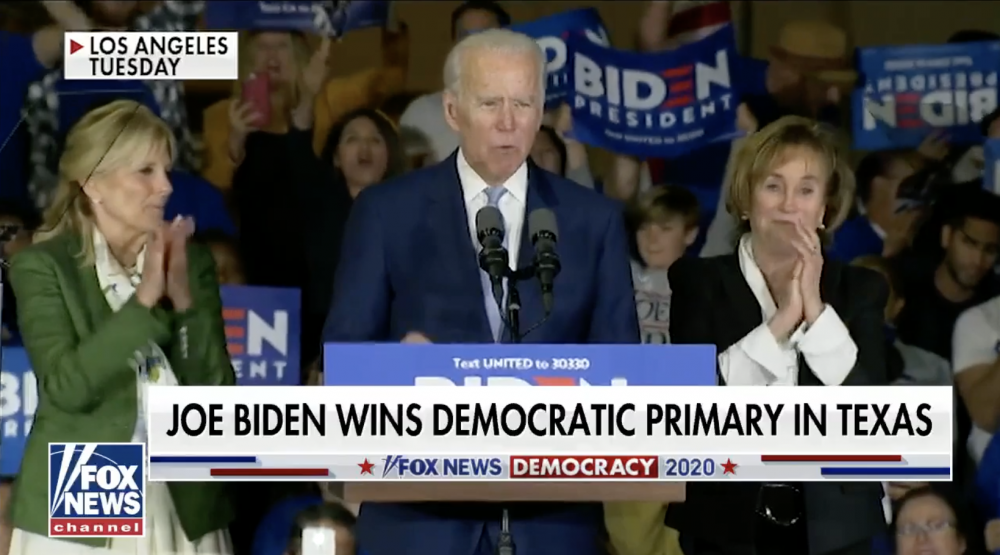 If Sanders leans to the right now, as the author claims, his candidacy will quickly lose momentum as it will lose its reason for being. Giving in to social democratic impulses always insures the betrayal of leftist expectations and political self-annihilation.

Senator Elizabeth Warren announced Thursday that she was ending her campaign for the Democratic presidential nomination following poor showings in the initial primary contests, capped off by a dismal third-place finish in her home state of Massachusetts in this week’s Super Tuesday elections.

Warren, ostensibly the other “progressive” alongside Vermont Senator Bernie Sanders, endorsed neither Sanders nor the current front-runner, former Vice President Joe Biden. She said she would make an announcement at a later time.

Warren became the latest contender to quit the race following victories for Biden in South Carolina last Saturday and in 10 of the 14 Super Tuesday contests, including the large states Texas, Massachusetts, Virginia and North Carolina and the rest of the southern states that went to the polls. Sanders won in California, Colorado, Utah and Vermont.

The other contenders, with the exception of Hawaii Representative Tulsi Gabbard, pulled out of the race this week as part of a massive and coordinated operation by the Democratic Party to resurrect the failing campaign of the main right-wing candidate, Biden, and prevent Sanders from prevailing on Super Tuesday and winning an insurmountable lead in pledged delegates to the July party convention.

In advance of Super Tuesday, billionaire Tom Steyer withdrew on Sunday, former South Bend Indiana Mayor Pete Buttigieg announced he was suspending his campaign Sunday night, and Minnesota Senator Amy Klobuchar dropped out on Monday. Both Buttigieg and Klobuchar appeared with Biden on Monday, the day before Super Tuesday, to declare their support for his campaign. Mike Bloomberg, the billionaire former mayor of New York, announced his withdrawal and endorsement of Biden on Wednesday, the day after the primaries. 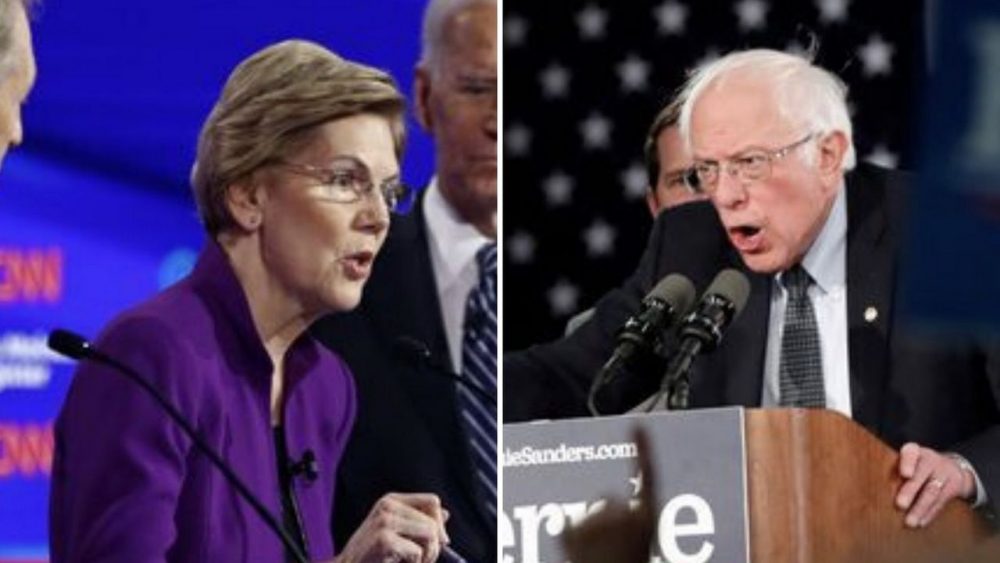 Warren's hesitation considering the clear differences between the two main candidates still standing shows her own lack of authenticity as a progressive champion.

Barack Obama spoke to Buttigieg and former Senate Majority Leader Harry Reid spoke to Klobuchar in advance of their endorsements of Biden.

On the basis of an appeal to racial politics, in opposition to class politics, the party apparatus, spearheaded by anti-socialist, right-wing representatives of the black bourgeoisie and upper-middle class such as South Carolina’s James Clyburn, were able to obtain a large majority of African American votes for Biden, who was presented as the champion of the black masses. This, combined with a large Biden vote by college-educated women in affluent suburbs, secured states such as Virginia and Massachusetts for the ex-vice president.

Biden emerged from Super Tuesday with a narrow lead in pledged delegates in what had become a two-man race.

The New York Stock Exchange celebrated Biden’s victory in the Tuesday primaries with a euphoric rise. The Dow rose nearly 1,200 points despite a worsening economic fallout from the coronavirus outbreak. Some health insurance stocks soared 10 percent, and health stocks overall gained nearly six percent on the prospect that Sanders and his “Medicare for All” proposal would be defeated.

Sanders’ response to his defeat on Super Tuesday and the loss of his front-runner status has been to tack to the right. On Tuesday, he began running a campaign ad consisting entirely of Barack Obama speaking in glowing terms of the senator who (infrequently) calls himself a “democratic socialist.”

“Feel the Bern!” the ex-president exclaims in the ad.

The ad is not only a bid for black votes, it is also a signal to the Democratic Party, including the African American party establishment, that they have nothing to fear from his “political revolution.”

Editor's Note:
CNN, as part of the Democrats' establisment media cabal has been quick to push back against Bernie's ads. Watch this closely as shameless CNN's disinformers Don Lemon and "fact checker" Daniel Dale tear the Sanders ad apart, an exercise they would never do when outright lies are disseminated by the establishment approved candidates.

Passing over Obama’s direct role in working to sabotage his campaign, Sanders is presenting himself as a continuator of an administration that became the first ever two-term presidency to preside over uninterrupted war, which allocated trillions to bail out Wall Street and presided over the biggest transfer of wealth from the bottom to the top in US history, which expanded America’s wars of aggression in the Middle East and extended them to North Africa, which covered up for CIA torture and expanded illegal mass surveillance of the public, which persecuted Edward Snowden, Chelsea Manning and Julian Assange, and which vastly expanded drone assassinations, including of American citizens.

Also in the aftermath of Super Tuesday, the co-chair of Sanders’ California campaign, Ro Khanna, said that Sanders would be toning down his calls for “political revolution,” and he told Politico that the candidate would direct his pitch more to older voters and mainstream Democrats.

At a press conference in Burlington, Vermont, on Wednesday, Sanders began his attack on Biden by denouncing him for having supported “dangerous trade agreements,” such as NAFTA, which Sanders, echoing Trump, blames for the destruction of industrial jobs and living standards in Midwestern states such as Michigan, which will hold a primary election on March 10. He thereby signaled that he intends to focus on his economic nationalist and trade war agenda in order to curry favor with the United Auto Workers and other trade union bureaucracies in upcoming primary states such as Michigan and Ohio.

In addition to Michigan, primary contests will be held next Tuesday in Missouri, Idaho, Mississippi, Washington state and North Dakota. The following Tuesday will see contests in Arizona, Florida, Illinois and Ohio.

There are widespread reports of big donors flooding money into Biden’s campaign, after having sat on the sidelines as the 77-year-old semi-senile Democratic veteran floundered over the previous weeks and Sanders won the popular vote in the first three primary contests and attracted large campaign crowds.

The next Democratic debate, to be held March 15 in Phoenix, Arizona, will be reduced to Sanders and Biden. Hawaii Representative Tulsi Gabbard, who won a single delegate in American Samoa on Tuesday, will be excluded once again as a result of new eligibility requirements being prepared by the Democratic National Committee.

Gabbard, who has publicly denounced the fraudulent media campaign against Sanders as the supposed beneficiary of “Russian meddling,” has been excluded from the debates since Hillary Clinton attacked her in October, calling her a “Russian asset” planted by Putin to divide the Democratic vote and reelect Trump.

ABOUT THE AUTHOR
Barry Grey writes for wsws.org, a Trotkyist organisation.
While using Marxian methods of historical analysis, and working toward a non-capitalist future, The Greanville Post does not endorse Trotkyism or any other specific faction. Thus we republish only those views we regard as useful and largely free of sectarian distortions. In a world in which truth and the correct path to social change, equality and peace are increasingly difficult to discern due to the proliferation of ideologies, information and disinformation sources, and the confusing imperfections and contradictions of many progressive voices, we try hard to give our audience the most reliable roadmap to effective struggle.

Well, we always pretty much knew that this would be the case, that even if by some miracle Sanders became president, nothing that he promised in his speeches would ever come to fruition, for whatever reason, political opposition, self-abandoment or even assassination.