Published: March 26, 2020Last Updated on April 23, 2020
Please make sure these dispatches reach as many readers as possible. Share with kin, friends and workmates and ask them to do likewise. 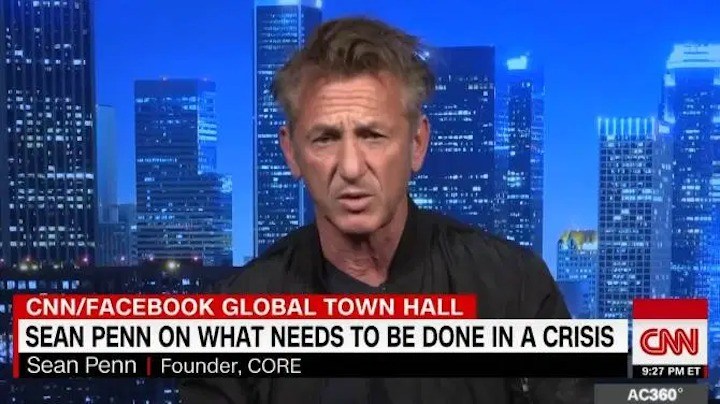 CNN recently trotted out Hollywood actor Sean Penn to give the nation expert advice on how to deal with a novel virus pandemic.

Did they do this because we live in a meaningless, godless universe where madness reigns and everything is chaos? Close, but no. They wanted Penn to explain to the public that it would be wonderful if the US military were deployed inside US borders to deal with the pandemic, because the US military is the greatest humanitarian force on planet Earth.

“There is no greater humanitarian force on the planet than the United States military,” Penn said. “The logistical skills, commitment to service, their care for the people. It’s really time to give the military the full breadth command and control of this operation. I wouldn’t blink, I would have put command and control in their hands a month ago, certainly today.”

"There is no greater humanitarian force on the planet than the United States military... it's really time to give the military the full breadth and control of this operation."

The US military is in fact one of the least humanitarian forces on this planet, second only to malaria-laden mosquitos (and even that’s debatable). No other force is circling the globe murdering people in countless undeclared military entanglements and bullying the world into complying with the interests of a nationless alliance of plutocrats and opaque government agencies at the expense of ordinary humans everywhere. They are the exact opposite of a humanitarian force on this planet.

Don’t say “Thank you for your service” to veterans whose only contribution to humanity has been helping to murder people for imperialist fossil fuel control agendas and Raytheon profit margins. Say “Thank you for your service” to your local cashier. To do the former is to participate in a cruel collective propaganda operation which only encourages more young people to hurl their bodies into the gears of the US war machine in search of the respect and honor you’re displaying, while to do the latter is to thank someone for actually providing a crucial service to human beings.

The malfunction in Penn’s mind is the result of many malignant factors, but among them is the fact that people who rise to fame and fortune naturally experience a gravitational pull toward elitist echo chambers which cultivate narratives that favor the status quo which gave rise to their fame and fortune. You have a hard time hanging out with normal people because most of them don’t treat you normally anymore, so you find yourself spending time with other rich and famous people, and with people who have a vested interest in the rich and famous.

This dynamic naturally fosters an environment where celebrities are eager to believe positive stories about the system which favors them, and where narrative managers are eager to circulate those stories among influential voices. This is why, with very few exceptions, the closest you’ll ever get to seeing a Hollywood celebrity express an anti-establishment opinion is one of them saying “Fuck Trump” at the Tony Awards. It’s also why every few weeks you’ll see some celebrity tweet something disgusting and then go into a meltdown when thousands of ordinary people react with revulsion; they don’t have ordinary people in their lives giving them feedback on what’s normal anymore, all they have is the elitist echo chamber.

Few life forms are as obtuse as Hollywood celebrities...dumbest people on the planet, for sure. 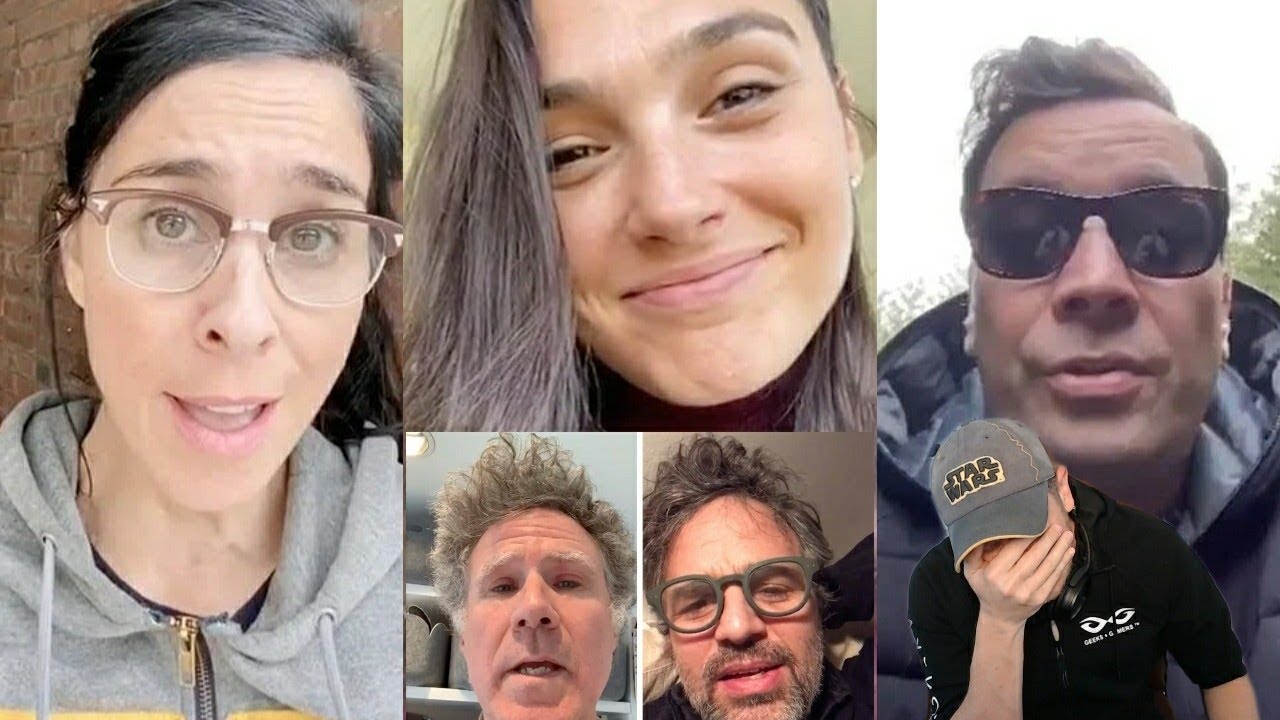 This echo chamber is what led a group of self-quarantining celebrities to believe it would be an awesome idea to share a video compilation where they all badly sing lines from John Lennon’s “Imagine” from inside their mansions with a world full of people who’ve been laid off from their jobs and are terrified for their futures. The figuratively and literally tone-deaf video was universally panned and people have been mocking it on social media ever since its release, which probably would have come as a surprise to the celebrities themselves since nothing in their insulated day-to-day lives would have told them they could all be collectively rejected with such disgust.

The celebrity “Imagine” project was spearheaded by Israeli actress Gal Gadot, who as an IDF veteran would not have required any Hollywood echo chambering to have undergone deep psychological programming in favor of the empire. Gadot, who famously came under fire for publicly cheerleading the 2014 Gaza massacre, first shared the video on Instagram with the caption “We are in this together, we will get through it together. Let’s imagine together. Sing with us.”

Memesters have of course been having fun with this. 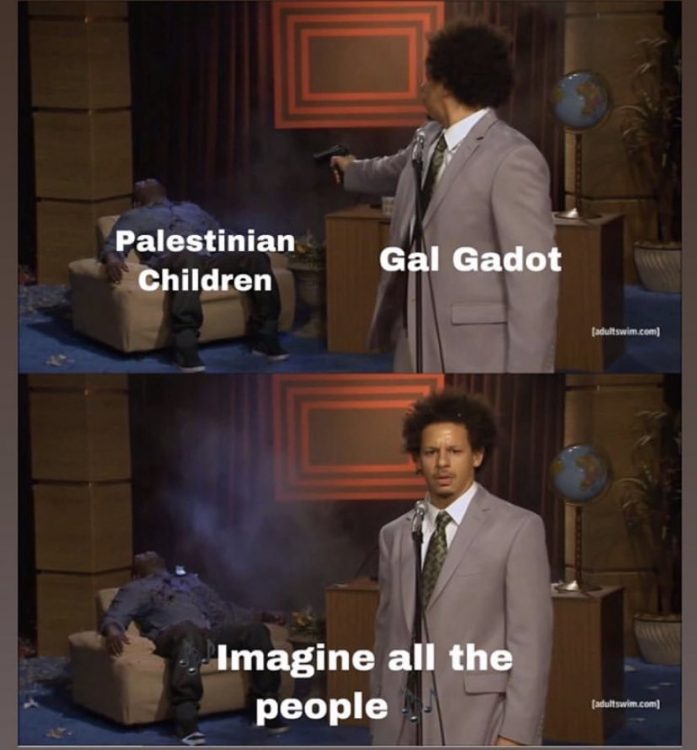 Then you’ve got celebrities like Rob Reiner, who just tweeted “No more fucking around. We’re standing on a precipice. Time to consider a Federal lockdown.”

Reiner is one of the more ham-fisted of the right-wing Democrats who we first saw promoting Russia hysteria, then working against the Sanders campaign, and are now promoting drastic totalitarian measures from their high-profile platforms. If you still hadn’t seen these people for what they are yet, you should definitely be seeing them now.

It is an absolute guarantee that powerful people will use this pandemic to advance authoritarian measures which they have no intention of rolling back once the pandemic is over. They are working to do this currently. This is not a possibility, this is an absolute certainty.

No more fucking around. We’re standing on a precipice. Time to consider a Federal lockdown.

While it does appear necessary to collectively use self-quarantining and social distancing to avoid crashing our healthcare systems and needlessly killing millions of people, we need to make sure we slam on the brakes long before we yield any more ground to the authoritarians than they’ve already shored up over the years. And we need to loudly shout down any celebrities who try to tell us otherwise.

Hollywood is a giant propaganda mill which when it isn’t cranking out movies which are literally funded and controlled by the US war machine is putting on spectacular ninety-minute “The imperialist world order is perfectly sane and capitalism is totally working” infomercial presentations. It is an arm of cultural control which is unrivaled by anything else in this world, so of course it has powerful forces at work within it ensuring status quo loyalism.

Whoever controls the narrative controls the world, and Hollywood celebrities are psyops wrapped in human skin. May our collective disgust with them continue to grow.