Home AMERICAN BRAINWASH Fool Me Once….. 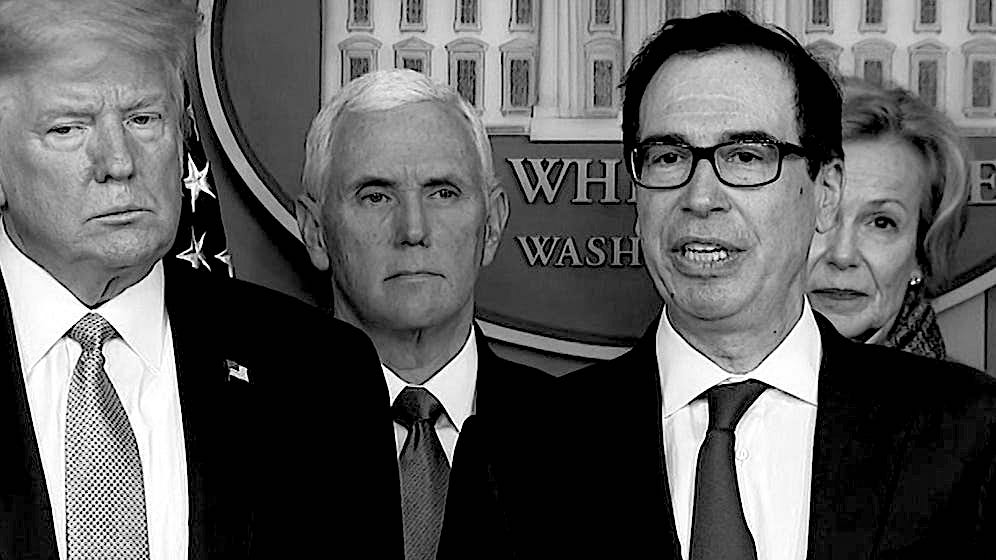 The Trump mob: The Don, flanked by Mnuchin, a shameless Wall Street crook, and stonefaced enforcer Mike Pence in the back. These are the picks of the litter in the US political sweepstakes.

Shame on YOU. Ok, one need not be a financial genius or economist to know that in 2008-09 Uncle Sam gave away the store to the failing Wall Street banks and investment corporations. We paid for it, you and me working stiff taxpayers, to the tune of well over one trillion US dollars. What did the so called ' bailout ' do for we who punch in the hours at work? What was that original stimulus given to each of us? Perhaps what, a $ 1000 check in the mail? Meanwhile, the ' Too big to fail' devious banks got taken off life support to the tune of billions for each of them. A must see film about the aftereffects of the Sub Prime scandal is Marc Levin's 2012 documentary ' Lost on Long Island'. He follows a group of laid off employees from different segments of the Wall Street financial community... with shocking results. That is how many working stiffs suffered by that bubble burst and the ensuing Bush/Cheney and then Obama gift to those sharks. What many in the media like to label as ' The Middle Class' revealed itself to be just working stiffs getting continually disappointed and screwed by the two headed monster: Predatory Corporate Capitalism and Good Old Embedded Uncle Sam.

This current pandemic, a worldwide phenomenon, is destroying both people's lives and the economies throughout the world. Companies cannot operate, working stiffs get laid off, and once again Uncle comes to the rescue of who? Of course, the super rich who run this corporate capitalism on steroids US empire. The FED recently decided what it did 12 years ago and created money electronically , funneling it right to those Wall Street behemoths and other Big Business. We are talking trillions this time! Oh, the new carrot fed to the mule to make him compliant is of course that $ 1200 one time only check to each citizen... and of course a four month extension of unemployment insurance. Let's see, the white collar and even blue collar working stiff who earns, let us say, $ 30 k a year, will get much less than the $ 600 a week he or she was used to getting. The higher up you go on that payroll scale the more the gap between one's actual pay and the unemployment insurance check. Translated : How in the hell can folks make it through this pandemic, which could last more than a few months? Public banking advocate attorney Ellen Brown has been touting what former candidate Andrew Yang was on board with: A Universal Basic Income plan to give each citizen $ 1000 ( minimum) per month... not just a 'one time only'. This UBI as they call it would be over and above one's current earnings and would have nothing to do with unemployment insurance. Ellen says Uncle Sam has now bailed out the banks... now bail out working stiffs!

This writer leaves it to the slew of progressive economists like someone as knowledgeable as Dr. Jack Rasmus to go over the minute details of this current bailout AKA Stimulus. My concern is to point the finger at the Army of Predatory Capitalists who made out like kings in 2008-09, and are now going to have a repeat performance...on we working stiff's dime. Go and read Aaron Glantz's great book Homewreckers to see how those sharks made out from the Bush/Cheney and Obama bailouts. Just one for instance, already mentioned in a previous column of mine ( and through my recent interview with Aaron Glantz), is that of our current Treasury Sec. Steven Mnuchin. Glantz reveals how Mnuchin, an alumnus of the giant shark Goldman Sachs, watched how mortgage giant Indy Mac was ready to fold up. He and his fellow investors bought Indy Mac for peanuts, changed the name to One West, and were holding well over 100,000 toxic mortgages... well over! The FDIC, supposed to be our savior, became an indirect co-conspirator with Mnuchin's company. Why? Well, here is how Glantz said it worked. When his One West company was holding a mortgaged home originally assessed at $ 300K, and now worth only $ 100K, the FDIC allowed One West to sell it for that $ 100k and then gave One West an additional $ 200 k. No kidding!! When my partners and I owned a failing cafe business in 2008, we had to sell it for 50% less than we put into it. Where was Uncle Sam then to help us?

So, what is the answer to this dilemma? Is it simply going out and voting in November, for whom, Twiddle Dum and Twiddle Dee politicians? Well, getting rid of the Trump crew is always a great motivation, but that is where it ends for we working stiffs. Currently, we cannot even rally in public, due to this pandemic. Yet, once the smoke finally clears a bit, we who labor for this empire need to get out and demand from our elected officials that they are supposed to represent us and not the 1/4 of 1 percent. Education of our young is priority one, along with education of the majority of working stiffs who most likely would not even see through the scam of this financial moment. Sad. Fool me twice, shame onME!!