Home AMERICAN BRAINWASH The Room Where It Didn’t Happen: Inside John Bolton’s Brain

The Room Where It Didn’t Happen: Inside John Bolton’s Brain

Print this post.
Please make sure these dispatches reach as many readers as possible. Share with kin, friends and workmates and ask them to do likewise.
Martin Sieff

When President Donald Trump belatedly but wisely fired John Bolton as his National Security Adviser in September 2019, I wrote in these columns that Bolton relinquished power with all the grace of a cockroach. Now, as I also predicted, he has published his memoirs turning on his benefactor with all the loyalty and gratitude of a scorpion. 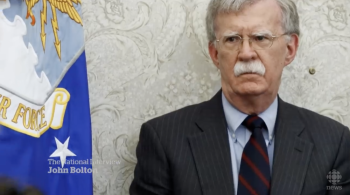 There is indeed nothing unexpected whatsoever in Bolton exceptionably badly written – and yet for that very reason, extremely entertaining – new book. It certainly will go down in history as the worst written, gloriously inept and therefore unconsciously revealing American political memoir since Hillary Clinton’s account of her own hilariously bungled 2016 presidential campaign “What Happened” (which of course should have had a question mark to complete the title as Clinton revealed that she too didn’t have a clue what had really happened and why.).

For just like Clinton, Bolton is a self-absorbed, narcissistic psychopath – always the surest path to power, respect and fawning praise from the media in Washington. And unlike Kevin Spacey’s President Frank Underwood in the Netflix TV series “House of Cards,” he is an entirely unselfconscious and unaware one.

Also like Hillary Clinton (who may yet be elected President of the United States), Bolton brilliantly confirms the legitimacy of the Dunning-Kruger Effect in psychiatry. It is always the most stupid, incompetent and useless people who are the most convinced that they are the most brilliant.

Bolton’s new memoir, “The Room Where It Happened,” reflects this sublime egotistical and unimaginably narcissistic dream state from beginning to end. No title could be more inappropriate and more hilariously revealing.

For John Bolton, during his 17 months as National Security Adviser to the President of the United States, supposedly one of the most powerful and important positions on the planet, was never in The Room Where It Happened. He wa salways kicked into the nearest convenient toilet – the Room Where It Didn’t Happen. Bolton was only at the center of affairs in his own imagination: In all his career that was the only thing which never faltered, never let him down and never failed him.

But in that other dimension which the rest of humanity frustratingly and inexplicably (to Bolton) calls “The Real World,” it was a very different story.

For no National Security Adviser in U.S. history has been so un-influential and inept, and so cut out from the actual decision-making process as John Bolton.

It is wrong to suggest, as many have done, that Bolton owed his rise primarily to the Israel Lobby and the financial clout of casino mogul Sheldon Adelson. Without doubt they both played their part, but Bolton clearly owned his inflated reputation in Trump’s eyes to his endless appearances on the Fox News Channel. If any other human being deserves the primary blame for his bizarre rise, it is clearly the late Roger Ailes, CEO of Fox News for 20 years from 1996 to 2016 who promoted him so shamelessly for so long. But even Trump quickly discovered that to be a superficially impressive talking head on a platform dedicated to promoting him, Bolton did not need to actually have a functioning brain.

Bolton’s extraordinary record of unrelieved fiasco, failure and stupidity as national security adviser was clear at the time and his memoir adds nothing new to or surprising to it.

Nor is there anything original or worthwhile in Bolton’s supposedly frank and outspoken endless insults and slanders of Trump’s Secretary of Defense James Mattis, Secretary of State Rex Tillerson and current incumbent Mike Pompeo. All they reveal is that Bolton was bound to be an utter failure in any position of government because he could not work with or respect anyone and no one could ever trust him.

What this book does do is to reveal the Real John Bolton – an egotistical idiot who imagines that he is always right about everything and that everyone else is unimaginably stupid and inferior to him and therefore always wrong about everything.

In Bolton’s imagination the Room where he is always the Only Room That Matters. He is incapable of realizing that he has always been shunted aside into the nearest convenient lavatory so everyone else can get on with serious business.

Far from being the wisest and shrewdest of policymakers, as Bolton imagines himself to be, the value of his testimony comes because he is so stupid, so innocent and so sublimely unaware of what is really happening.

This extraordinary naiveté is what will make Bolton’s memoir of enduring significance. It is an unintentional comic masterpiece.

A thousand years from now, “The Room Where It Happened” may yet survive as a compelling explanation for why the great world-spanning American Empire collapsed so suddenly. For no society that elevates a figure of such exceptional comic ineptitude to such eminence, after swallowing the fantasy of his supposed “brilliance” for so long can possibly endure.

Martin SIEFF • During his 24 years as a senior foreign correspondent for The Washington Times and United Press International, Martin Sieff reported from more than 70 nations and covered 12 wars. He has specialized in US and global economic issues.

ALL CAPTIONS AND PULL QUOTES BY THE EDITORS NOT THE AUTHORS
RevisShielded: 52
All comments subject to anti-hacking filters.
1
FacebookTwitterPinterestRedditEmail
previous post

Wasting Food in Biblical Proportions: Or How a SIMPLE Logistical Problem Becomes a Crime Under Capitalism. The Search for Rational Agriculture.