Tom Luongo
There are few men in modern American history more venal than Former National Security Adviser John Bolton. Calling Bolton a relic of the Cold War in his outlook on foreign policy is a kindness.

Bolton is a dangerous and pathetic creature whose entire life is an example of how incomplete men with a talent for violence can rise in a late-stage cesspit of political corruption. 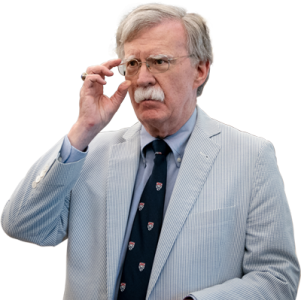 He is simply someone who has never been in a fight in his life who lusts for the power to kill, main and destroy anyone who dares challenge him. A pathology he’s had the dubious distinction of being able to act out in the real world on more than one occasion.

This will, hopefully, be the last article I write about his cretin because once his last fifteen minutes of fame are used up attacking President Trump in slavish interview after interview supporting his book, Bolton will be finished in Washington D.C.

This book is his gold watch for being a lifelong soldier in the service of the American empire and the neoconservative/neoliberal dream of global conquest. $2 million, a handful of residuals and a final victory lap for a life spent in pursuit of the subjugation of those he considers sub-human.

I gave John Bolton, who was incapable of being Senate confirmed because he was considered a wacko, and was not liked, a chance. I always like hearing differing points of view. He turned out to be grossly incompetent, and a liar. See judge’s opinion. CLASSIFIED INFORMATION!!!

And while Bolton spent the balance of his career in D.C. working nominally for Republicans, his lust for war served both parties equally well. That war lust was in service of the empire itself when Bolton was fired, and he turned against President Trump.

He was welcomed as a Hero of the Resistance by Democrats intent on impeaching the President after he was fired last year, one of the few good moments in Trump’s nearly four years at the helm of U.S. foreign policy. Given his involvement with Fiona Hill and Eric Chiaramella, the whistleblower whose testimony created the impeachment charges, Bolton really could be thought of as the architect of that process.

So, it’s no surprise that his book is welcomed as the gossip event of the summer by the media. But remember, this is a guy who refused to testify against Trump for Jerry Nadler and Adam Schiff and that’s because he would have never stood up to cross-examination.

This is because, ultimately, John Bolton is a coward. And he’s the worst kind of coward. He’s the kind of man who deals underhandedly while hiding behind rhetoric in controlled environments to pursue his fever dreams of suppressing the Untermensch.

What we know now, thanks to Bolton’s unwillingness to keep his trap shut, is that things were as we suspected while he was in the White House. Every event that occurred was an excuse for Bolton to tell Trump to go to war. And every time Trump was led up to that trough to drink, he backed away causing Bolton’s mustache the worst case of sexual frustration.

Worse than that, Bolton sabotaged any hope of détente with Russia, North Korea and improving the situation in the Middle East. While he was right to hate Jared Kushner’s Deal of the Century for Israel/Palestine, he was instrumental in getting Trump to stay in Syria rather than turn over what’s left of its suppression to the people who actually want it to continue – Israel and Saudi Arabia.

In the end Bolton is really the best example I can come up with for the monolithic thinking that permeates D.C. Despite his best instincts, Trump took Bolton on because the potential talent pool is so thin.

Anyone with original ideas, such as Kentucky Senator Rand Paul, are more valuable in their current position rather than coming into an administration that is hamstrung by a permanent bureaucracy unwilling to change, or in open revolt.

There’s no profit for them to make the jump even if they wanted to.

This point has been in effect since before Trump took office when he wouldn’t stand behind his first National Security Adviser, Michael Flynn, who is still embroiled in the worst The Swamp can throw at a person.

Progressives, liberals and anti-imperalists I implore you to stop allying with this creature of The Swamp in his quest to do damage to a president you hate. Because by doing so you are strengthening the very people who are the architects of the empire you believe you are fighting against.

Because that’s who John Bolton wrote this book for.

He didn’t write it for you.

Bolton will ultimately be a foot note in the history books. A man whose only claim to fame was failing to allow a president to make some peace with North Korea and set the U.S. on a path to complete alienation with the rest of the world.

Because of the neoconservatives’ intense war lust, as embodied by Bolton, it pushed Trump, already an arch-mercantilist, even farther along the path of using economic pressure to force change on the world stage.

But, as I’ve been saying for years now, that is a strategy just as ruinous in the long run for the U.S. as Bolton’s cowardice urging use of a military — which he refused to serve in — to do his dirty work for him.

These are both expressions of an empire which refuses to accept that it is in decline. And it has invited the chaos now evident in cities all across the U.S. as our wealth has been squandered on endless wars for regime change overseas while building a regulatory police state at home.

That helped pushed the militarization of our local police, further putting them in conflict with a domestic population growing more desperate and reactionary on both sides of the political aisle.

Bolton’s projection of all the U.S.’s ills onto countries with no real ability to harm us physically ultimately was not only his undoing with Trump but the U.S.’s undoing as a leader of the post-WWII order.

Tom Luongo is an independent political and economic analyst based in North Florida, USA
RevisShielded: 73

The Room Where It Didn’t Happen: Inside John Bolton’s Brain