Imperialism in Your Face: Tycoon Elon Musk Confesses to Lithium Coup in Bolivia 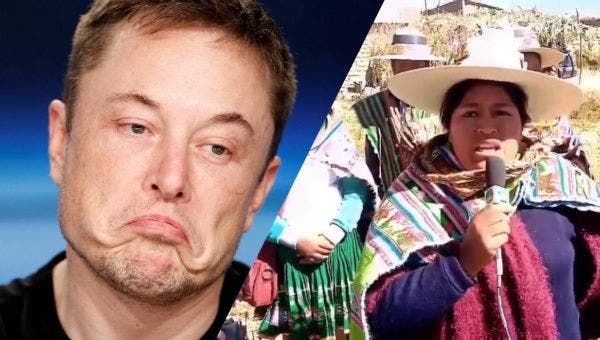 The billionaire CEO of Tesla and lithium-exploiting capitalist has admitted his role in the November coup.

The CEO of the U.S.-based Telsa car manufacturer has admitted to involvement in what President Morales has referred to as a “Lithium Coup.”

"We will coup whoever we want! Deal with it.” was Elon Musk’s response to an accusation on twitter that the U.S. government organized a coup against President Evo Morales, so that Musk could obtain Bolivia’s lithium.

"We will coup whoever we want! Deal with it.”--Elon Musk (@elonmusk) July 25, 2020
Foreign plunder of Bolivia’s lithium, in a country with the world’s largest known reserves, is widely believed to be among the main motives behind the November 10, 2019 coup.

Lithium, a critical component of the batteries used in Tesla vehicles, is set to become one of the world’s most important natural resources as manufacturers seek to obtain it for use in batteries for electric cars, computers, and industrial equipment.

The defacto administration of Jeanine Añez has already announced its plan to invite numerous multinationals into the Salar de Uyuni, the vast salt flats in Potosi, which holds the precious soft metal.

Right-wing Vice Presidential candidate and running mate to Añez, Samuel Doria Medina, proposed a Brazilian-Bolivian project which would use lithium from the town of Uyuni.

Meanwhile, letter from the coup regime’s Foreign Minister Karen Longaric to Elon Musk, dated march 31st, says “any corporation that you or your company can provide to our country will be gratefully welcomed.”

Authorities from Chayanta, Norte Potosi say Bolivia's lithium is being ransacked from the indigenous peoples. pic.twitter.com/S1NQJED1C0

Social movements have repeatedly warned that lithium and natural resources would be surrendered to foreign capital by coup authorities, in a reversal of plans by Evo Morales’ Movement Towards Socialism (MAS) administration to process the lithium within Bolivia rather than exporting the raw material to the global north.

The project represented a rejection of the neocolonial relationship Latin American countries have often had with the imperialist cores.

With the agreement now scrapped along with countless other state projects, and with elections now thrice delayed by the illegitimate defacto authorities, the people of Uyuni and social movements around the country say they’ll continue to oppose the ongoing privatization and are organizing against the return of looting of Bolivia’s natural resources by ruthless and exploitative foreign capital.