Print this post.
Please make sure these dispatches reach as many readers as possible. Share with kin, friends and workmates and ask them to do likewise.
Lauren Martinchek

His tweets serve as a pretty clear indication of the failures of the American system, and the sort of person he is. 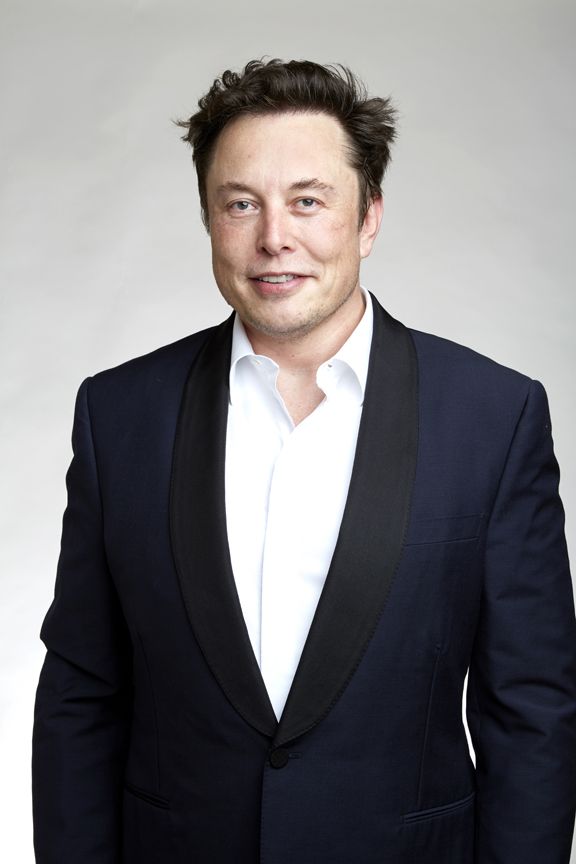 Musk: A tall, nerdy, sociopathic multibillionaire narcissist with no political common sense or social empathy to speak of, a good exponent of the capitalist disease.

I’m a big believer in the idea that every billionaire is a policy failure, and it’s certainly safe to say that after his recent spiral on Twitter, Tesla and SpaceX founder Elon Musk has certainly not proven himself to be an exception. He has has had a considerable amount to say about the events of the past few months, and in doing so managed to indicate a lot about himself, his worldview, and undoubtedly his politics in the process. As ridiculous as his antics have been, whether it be threatening to move his Tesla plant after unwanted new Covid regulations or endorsing Kanye West’s bid for the Presidency, one comment in particular that Mr. Musk made stood out considerably as arguably the most revolting, transparent, and enraging statement from someone with his position that I have ever come across.

After unsurprisingly making it known that he does no support the idea of another stimulus package and that he feels it’s not in the best interest of the people, twitter user Armani responded with:

“You know what wasnt in the best interest of people? the U.S. government organizing a coup against Evo Morales in Bolivia so you could obtain the lithium there.”

Elon’s nine word reply remarkably managed to embody everything I and countless others find so fundamentally enraging about the end-stage capitalist American empire, with a simple:

“We will coup whoever we want! Deal with it.”

After reading those words, immediately what struck me was the absolute nerve. I began imaging what it must be like to have the audacity to feel not only so entitled, but arrogant, uncaring, and inarguably sociopathic in his position of privilege that he feels comfortable bragging about the ousting of a democratically elected official in another country by their military for his own enrichment as though he had done nothing more than take the last candy bar. Even for a man like him, the boldness of those words shocked me, especially considering this wasn’t the first time Elon Musk had been attributed to the coup in Bolivia.

Back in February, Muave Bolivia wrote in a piece translated by CodePink that:

“In this deleted tweet, Doria Medina tagged Elon Musk and suggested that Brazilian President Jair Bolsonaro is attempting to convince Musk to open an electric car factory in Brazil. Medina then proposed “to do a joint Brazilian-Bolivian project in which we can supply the batteries for these cars with lithium from Uyuni.” However, once the issue blew up on social media, Doria Medina, who had threatened to privatize a company a day in Bolivia when he was a government minister, eliminated the tweet and replaced it with one in which he attempted to clarify that this time he “would not privatize” public Bolivian companies.

Doria Medina, who is the running mate of the de facto president of Bolivia, Jeanine Añez, is a businessman who has been accused of amassing his fortune through the sale of the country’s natural resources and the privatization and divestment of State companies.

The claim that Elon Musk intruded into Bolivian politics has gained steam insofar as there are justified suspicions that lithium, a key resource for the manufacturing of Tesla’s car batteries, can be obtained without paying for the share that would correspond to the Bolivian people. Instead, it could be sold at cut rate prices for the direct benefit of the country’s decisionmakers, such as Doria Medina, for example, who has a track record of privatizations and happens to be the nation’s vice-president.

To give more context, it is necessary to mention three key facts. The first is that Bolivia has one of the biggest reserves of easy-to-extract lithium in the world. The second is that lithium is the raw material for lithium batteries, which is the main energy storing mechanism that makes electric cars work. The third is that Tesla is the biggest manufacturer of electric cars in the world.”

Mr. Musk can insist that his lithium comes from Australia, as he did immediately following his tweet, all he wants. I, and I’m sure countless others, aren’t buying it. That was an admission of guilt in an erratic, spur of the moment, heated twitter keyboard incident and should be treated as such. 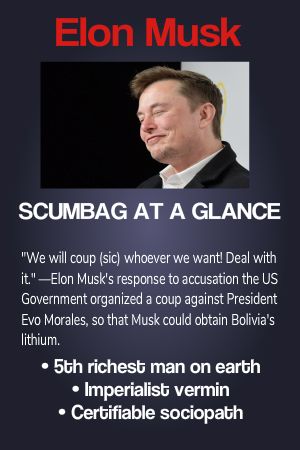 Our art people prepared this capsule salutation for Elon Musk, reminding everyone what a swell guy he is.

There is no such thing as a billionaire who got where he is purely out of hard work and perseverance, and Musk’s comments are such a brutal reminder of that reality it almost feels like a slap in the face. It takes cruelty, narcissism, and an unapologetic willingness to crush anyone or anything that stands in your way, even if it costs lives, democracy, and stability for an entire nation of people. Frankly, Musk’s candid and spiteful admission of the lengths he was willing to go for his own personal, already unimaginable wealth should be enough to radicalize anyone, and serve as a sharp reminder of the global scope of the cruelty of capitalism and the American empire..

Perhaps the most devastating aspect to all of it is the fact that it doesn’t even serve as nearly as much of a reflection on him personally as it does on the system that allowed it to happen, because he certainly isn’t alone in his endless pursuit of profit. Let's not forget that in the midst of an ever-worsening global pandemic, Amazon under the leadership of founder and CEO Jeff Bezos ended the measly two dollar an hour hazard pay and other emergency measures for its workers, all while their labor has put Bezos in prime position to become the worlds first trillionaire by 2026.

So long as these people and their unmitigated greed continue to be able to operate under a system that by definition incentivizes their greed, there is no such thing as a just and equal society. Not only is their theft of resources and labor negatively impacting the lives of the American people, there is no denying the global spread of their endless greed. For the sake of not only the people of the United States but the global community and frankly our planet as well, it’s time to take action. The class warfare only intensifies, and it’s time for people to realize the infinite power they have with their labor. Fight back where it hurts most: the pocket book.

Lauren is a writer & leftist with analysis on topics related to politics & policy. She can be reached at LaurenMartinchek@gmail.com or Twitter @xlauren_mx

ALL CAPTIONS AND PULL QUOTES BY THE EDITORS NOT THE AUTHORS
RevisShielded: 21,065
All comments subject to anti-hacking filters.
0
FacebookTwitterPinterestRedditEmail
previous post

Imperialism in Your Face: Tycoon Elon Musk Confesses to Lithium Coup in Bolivia