May 23, 2021 6 minutes read
Please make sure these dispatches reach as many readers as possible. Share with kin, friends and workmates and ask them to do likewise. 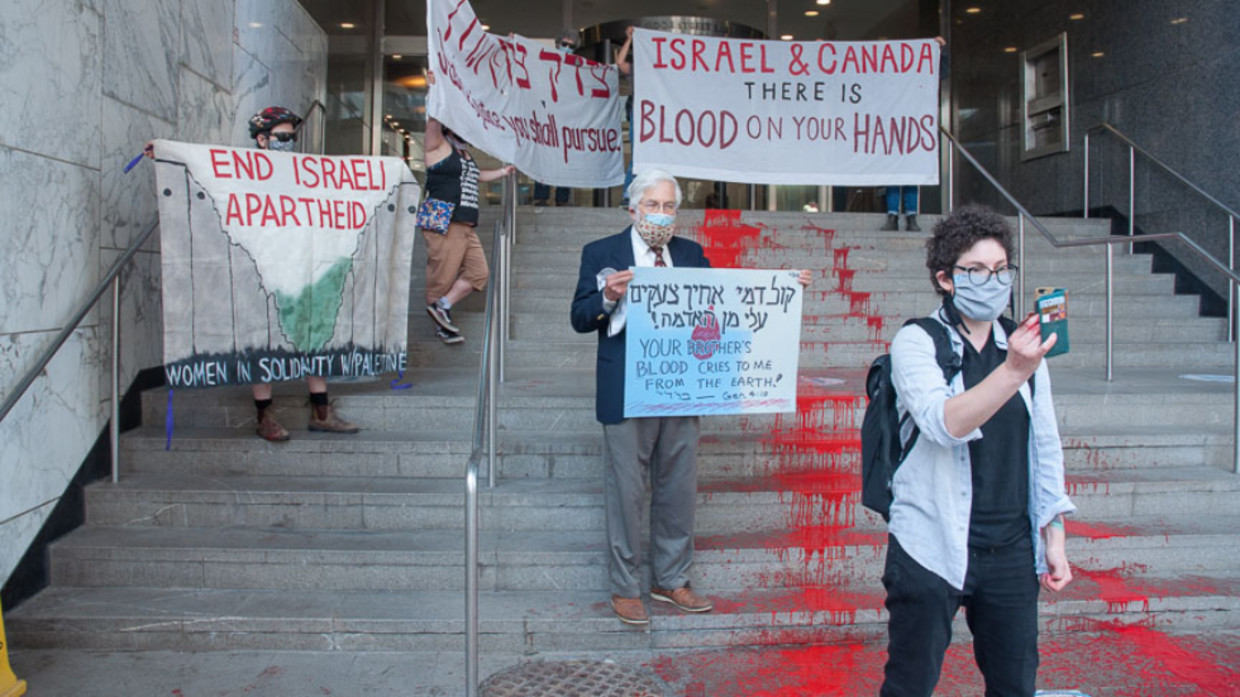 Peace activists gather at the Israeli Consulate in Toronto, Canada to protest Israeli military operations in the Gaza Strip, May 21, 2021. ©  WorldBeyondWar.org / screenshot

The steps outside Israel’s Toronto consulate were spattered in red paint by a Jewish anti-war group and other peace activists to symbolize “blood on the hands of Israel.” The Israeli mission denounced the stunt as vandalism.

Members of Independent Jewish Voices (IJV), World Beyond War and other activist groups gathered at the Israeli Consulate on Friday to protest the “bloodshed from Israel’s violence in Gaza,” which saw 11 consecutive days of [lopsided] fighting between Tel Aviv and Palestinian militants.

“We’re here to be sure that the blood on the hands of Israel is visible, so we have put this symbol of blood coming out of the door,” Rabbi David Mivasair, a member of IJV, said in a Facebook video as he stood outside the consulate.

No one can go into these offices of the Israeli government right here in Canada without seeing what Israel is about. We’ve made it visible.

This morning we covered the steps to the Israeli consulate in Toronto with a river of blood to make sure Israeli military violence—and the Canadian government's complicity in it—was very visible. We were joined by allies Independent Jewish Voices Canada, Just Peace Advocates/Mouvement Pour Une Paix Juste and Canadian

The protest came less than 24 hours after a ceasefire deal was reached between Israel and armed groups in Gaza, which was mediated by Egypt and took effect early on Friday morning. The activists nonetheless condemned the eruption in violence, which saw hundreds of IDF air strikes and thousands of Hamas rockets fired into Israeli cities.

Rachel Small, an organizer with World Beyond War, said that while the group is “encouraged” by the ceasefire, it would not allow the “blood, the death, the destruction of the Israeli government” to be “invisible.”

Powerful photos from today's action. “We are making the violence of Israel’s brutal occupation visible on the consulate’s doorstep in Toronto. We are making it impossible for anyone to enter & exit Israeli govt offices w/o confronting the bloodshed they're complicit in.” pic.twitter.com/koHEkAT1wq

In a statement to CTV News Toronto, the head of the Israeli Consulate, Galit Baram, condemned the move as vandalism, adding that Tel Aviv’s operations in Gaza were in self-defense.

“Israel was forced to defend its citizens,” she said. “Israel did so in a surgical, controlled manner, in an effort to eliminate Hamas terror infrastructure, while making substantial efforts to limit civilian casualties.”

At least 232 Palestinians were killed in the fighting, including 65 children, according to Gaza health officials, while Israeli authorities say 12 citizens died, among them two youths.

The World Health Organization reported on Friday that more than 8,500 injuries were sustained in Gaza, while some 30 hospitals and other health facilities were damaged or destroyed by Israeli strikes. Apartment blocks, media offices, a crowded refugee camp and Gaza’s main coronavirus testing and vaccination site were also targeted in air raids.

The latest flare-up began in earnest on May 10, following a series of heated protests over looming evictions of Palestinian residents of East Jerusalem, which met harsh police crackdowns and saw hundreds injured in the resulting clashes. An Israeli incursion into Al Aqsa mosque served as a major flash-point, with police attempting to disperse a gathering as worshippers met for Ramadan prayers. The first volley of rocket fire from Gaza soon followed, triggering a flurry of IDF air and artillery strikes.

Some Simple Lies Out of Washington: Who Is the Terrorist and Who Is the Victim?