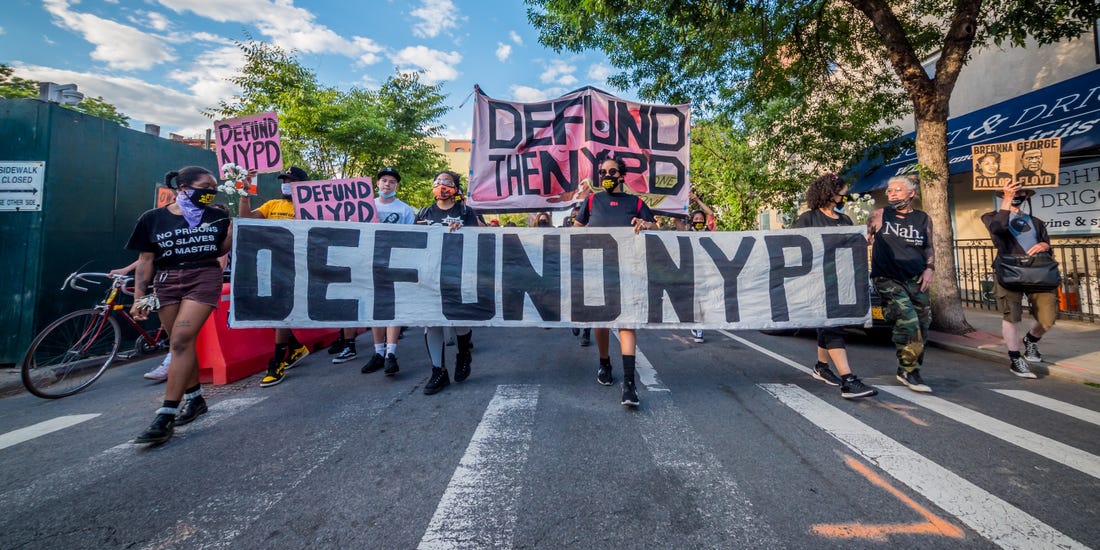 “Defunding” the police has often turned out to be an accounting trick, but community control of police – a righteous demand – must also ensure that all government functions address human needs.

“The armed forces of Russia, Germany, France, the U.K. and Japan all receive less money than American police departments.”

One year ago, thousands of people engaged in protest in the wake of George Floyd’s killing by a Minneapolis, Minnesota police officer. A persistent protest demand was for defunding police departments. The appeal of this rallying cry was obvious. Police in this country are a law unto themselves, killing and brutalizing at will, and rarely being called to account. Often these fatal encounters occur after minor offenses are committed or in the case of black people, when a call for assistance instead leads to death.

The premise of defunding police is well intentioned but faulty. In the past year we have seen sleight of hand in cities like New York where alleged funding cuts amounted to nothing more than budgetary trickery. Even in Minneapolis, where the movement began, defunding became nothing more than a name change.

It isn’t hard to understand why change in this area is so difficult. As of 2018, police departments in this country received more than $118 billion  in funding. Only the military in the United States and China receive more money. The armed forces of Russia, Germany, France, the U.K. and Japan all receive less money than American police departments. They are in fact a domestic military force.

“Defunding can become nothing more than a name change.”

Why then do so many people insist that police budgets have been cut? Because this particular trope gives credibility to racist politics and practice. When Democrats lost seats in the House of Representatives in 2020, the losers immediately claimed that the concept of cutting police budgets was to blame for their defeats. Republicans have leaped on the story and as usual engage in strict message discipline, insisting that the police are short of money and that increases in crime are the result.

The media adds to the drama with their usual determination to take the side of the powerful. William Bratton  led police departments in New York and Los Angeles and in a recent New York Times interview said,“ They got what they wanted. They defunded the police. What do they get? Rising crime, cops leaving in droves, difficulty recruiting. Now, they’re waking up to the fact that our cities are unsafe.”

Not only should this propaganda be rejected, but the original questions about police funding should be revived. Police do have far more money than they need to do their jobs. Bloated budgets are a feature of police work in a society dedicated to racist practice. The modern day slave patrol is a racket that gives good paying employment to people who otherwise wouldn’t have it while simultaneously keeping Black people under physical control. But even if reducing funding were a realistic proposition, is that what the demand should be?

“Bloated budgets are a feature of police work in a society dedicated to racist practice.”

Community control of the police should be the goal but that can’t happen unless all government functions address human needs. Without real democracy and a true commitment to human rights, policing will not change. Of course, any discussion of law enforcement is inextricably linked to anti-Black racism, the controlling feature of many aspects of public policy in this country.

No one should allow themselves to be confused by racist pro-police propaganda or to be convinced that they should stop agitating for change. But questioning previous actions, even those made with the best of intentions, is always a positive step.

The United States as currently constituted can’t function without huge police departments and the big budgets that go with them. An increasingly stressed society must be kept under watch precisely because popular discontent may erupt at any moment. Last year’s protests prove that there are many very discontented people and the domestic military will be ready to keep them all under as much control as it possibly can.

“Without real democracy and a true commitment to human rights, policing will not change.”

We are left where we started out before anyone knew the name George Floyd. The struggle for change is difficult but it must continue with the knowledge that cutting police budgets or changing their practices in any way will be fought tooth and nail. Dishonest statements about rising crime or lost elections come with the territory.

The issues of police brutality and budgets cannot be approached as if they are separate from anything else. Community control of police cannot be separated from demands for peoples’ control over any other aspect of their lives. In short, revolutionary change is still what the people need. Everything from policing to housing to health care cannot be improved unless there is fundamental and systemic change. Of course that is a much bigger fight but it cannot begin without speaking truth about our condition and the difficult process of bringing about real justice.

Margaret Kimberley’s Freedom Rider column appears weekly in BAR, and is widely reprinted elsewhere. She maintains a frequently updated blog as well at http://freedomrider.blogspot.com . Ms. Kimberley lives in New York City, and can be reached via e-Mail at Margaret.Kimberley@BlackAgendaReport.com.