June 28, 2021
HELP ENLIGHTEN YOUR FELLOWS. BE SURE TO PASS THIS ON. SURVIVAL DEPENDS ON IT.


[su_testimonial name="—The Editor" photo="https://www.greanvillepost.com/wp-content/uploads/2021/05/PG2-front-rosier.jpg"]It takes a vanguard Latin American politician and intellectual like Alvaro Garcia, with the finesse characteristic of that civilization, to diagnose with precision the global chaos imprisoning humanity as imperialism implodes on account of its own incurable criminal contradictions.[/su_testimonial] 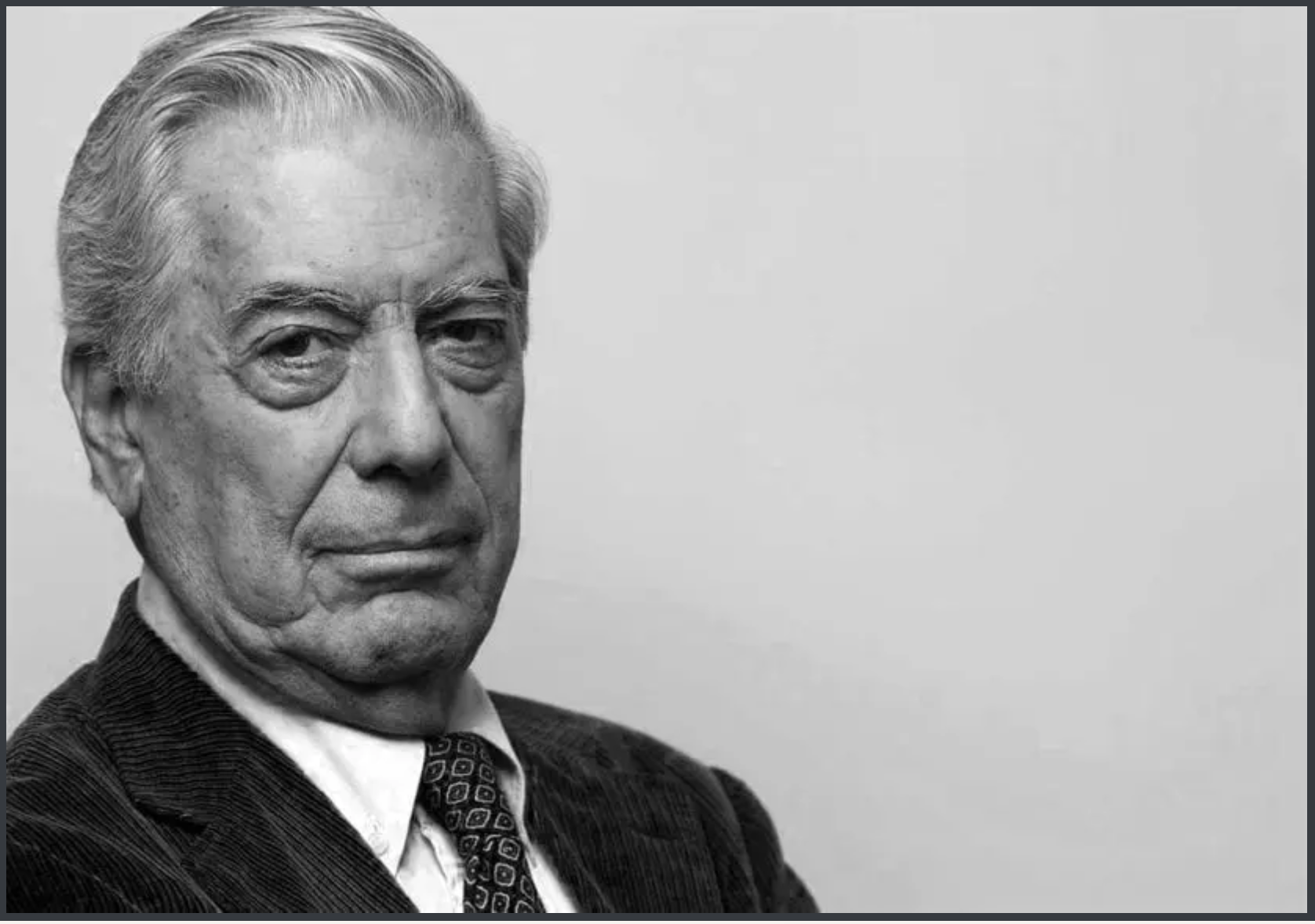 Vargas Llosa: long a reactionary icon in Latin America and beyond. His prose has turned rancid and indigestible.

All things age; living organisms, people and ideas. It is the harshness of the second law of thermodynamics. But there are worthy ways to do it, remaining loyal to the principles with which the zenith of existence was reached, aware of the mistakes and without regrets or last-minute transformations. But there are examples of those that are corrupted by choice, that degenerate by decision. They are the creatures that wallow in the putrefaction of the soul, dragging behind them the pestilence of a lost destiny.

This is the pathetic future of the political Vargas Llosa of today; not of that literary genius who made his own merits to enter the shelf of universal letters with “The City and the Dogs” or “Conversation in the Cathedral”.  His current political prose is tawdry, full of ideological monstrosities that stain the neatness of the conservative ideals he once professed. It is as if there is a deliberate effort to debase the Nobel laureate he received and leave standing a decadent politician troubled by barbaric passions.

Currently Vargas Llosa is swallowing his once ennobling democratic convictions to support without decorum the heiress and cover-up of the Fujimori regime that closed the Congress of Peru, suspended the judiciary, ordered the military assault on the Peruvian media and promoted death squads with dozens of massacres to their credit. This speaks of a perverted drama in which a calm liberal mutates into a fiery neo-fascist.

Now the planet is plunged into an uncertainty of fate. The ruling elites diverge on how to get out of the economic and environmental quagmire they have caused, the poor no longer blame themselves for their poverty, the neoliberal utopia is fading and the priests of the free market no longer have parishioners at their feet to bamboozle with future redemptions in exchange for present complacencies.
And it is not a matter of weak temperament or ephemeral convictions that perhaps, in this case, have helped the elegance of his prose. In reality, Vargas Llosa is a literate example of an emotional displacement of the times.

He supports the crass maneuvers of the defeated Keiko Fujimori who denounces electoral “fraud” and annuls thousands of votes from indigenous communities and maintains a curious silence in the face of the manifesto of former military leaders for the Armed Forces to disavow Pedro Castillo’s victory.  Thus, he is ideologically related to Trump who instigated his followers to violently take over the US Congress in January 2021; or to the presidential candidate Carlos Mesa who, upon learning of his defeat in November 2019 against Evo Morales, called on his followers to set fire to the Bolivian electoral courts, including the votes of the citizens. These are attitudes not very different from that of Bolsonaro who criticized the Brazilian dictatorships (1964-1985) for only having tortured instead of killing leftists; or the indignity of Piñera crumpling his small Chilean flag, to show Trump that its colors and star would fit in a corner of the American flag.

These are symptoms of the decline of a political liberalism that, in its refusal to assume with aplomb the twilight of its lights, prefers to bare its miseries in retreat. It used to be able to boast of its [bourgeois] democratic affiliation, its cultural tolerance and commiseration for the poor, because, regardless of the victorious political party, the rich always triumphed in the world where the alternatives of “possible worlds” were designed to suit them.

Now the planet is plunged into an uncertainty of fate. The ruling elites diverge on how to get out of the economic and environmental quagmire they have caused, the poor no longer blame themselves for their poverty, the neoliberal utopia is fading and the priests of the free market no longer have parishioners at their feet to bamboozle with future redemptions in exchange for present complacencies.

It is the time of the decline of the globalist consensus. Neither those at the top have shared criteria on where to go; nor do those at the bottom trust in the old course that those at the top pointed out to them. Everyone is living in a state of collective stupor, in the absence of a feasible future that triggers, among the global humiliated, outbursts of anguish, discomfort, anger and revolt. Occupy Wall Street, the Indignados Movement in Spain, the “yellow vests” in France, the popular uprisings in Chile, Peru and Colombia; the waves of Latin American progressivism, are the symptoms of a convulsive era of unleashed anxieties that is just beginning. None of these nonconformists knows with certainty where to go, although they know with plebeian and street clarity what they can no longer bear. It is the time of a present that is fading and of a future that neither arrives nor announces its existence, and the old dominant beliefs are cracking, retreating to give way first to radical disbelief, and then to the search for some new certainty where hopes can take root.

It is a creative chaos that erodes the old moral tolerances between those “above” and those “below” and, with it, pushes the neoliberal consensus that brought society together to retreat. The street and the vote, no longer the media or governments, are now the spaces of grammar where the new popular mood will be written.  Democracy is revitalized from below, but paradoxically because of this, it has become a dangerous medium for the neoliberal ideologues who were democrats as long as the vote did not jeopardize the privatizing and free market consensus. But, now that the street and the vote contest the validity of this unique destiny, democracy is presented as a hindrance and even a danger to the validity of twilight neoliberalism.

The denunciations of fraud spreading throughout the Americas, and which will surely be present in Europe, are not only the war cry of the defeated. They are the desperate slogan of the now neoliberal minorities, to systematically attack democratic institutionality and the legitimacy of the vote as a means of electing rulers. The coup d’état tends to be installed as a feasible option in the conservative political repertoire.  And all this is done riding a furious language that crushes in its gallop any respect for tolerance and pluralism. They unabashedly brandish racial supremacism against indigenous people and migrants alike.  They scorn plebeian nonconformism, which they label as expressions of “savage hordes”, “ignorant”, “aliens” or “terrorists”. And in a laughable anachronism, they dust off the “anti-communist” phraseology to cover up with atavistic fears the violent disciplining of the poor, women and leftists. Neoliberalism is degenerating into a self-conscious neo-fascism.

We are facing the decomposition of political neoliberalism which, in its phase of decline and loss of hegemony, exacerbates all its violent charge and is ready to make a pact with the devil, with all the dark, racist and antidemocratic forces, to defend an already failed project. The universalist consensus of which neo-liberalism boasted in the 1990s has given way to the hatred of an outlaw ideology. And, as the latest Vargas Llosa demonstrates, the narration of this cultural rot is a literary bodrio devoid of the epic of worthy defeats.

Farewell to a good man: MIKE GRAVEL, FORMER SENATOR AND VOCAL CRITIC OF US MILITARISM, DIES