The Yellow Vests are back! But Macron promises more and harsher repression, while the corporate media, both French and foreign, look the other way.

Published: October 22, 2021Last Updated on October 26, 2021 10 minutes read
HELP ENLIGHTEN YOUR FELLOWS. BE SURE TO PASS THIS ON. SURVIVAL DEPENDS ON IT.

The Yellow Vests poised to restart marching in Paris: The Bastille monument is in the background and a “Stop the genocide of the Gauls” sign is at the head of the demonstration. (All photos by the author). 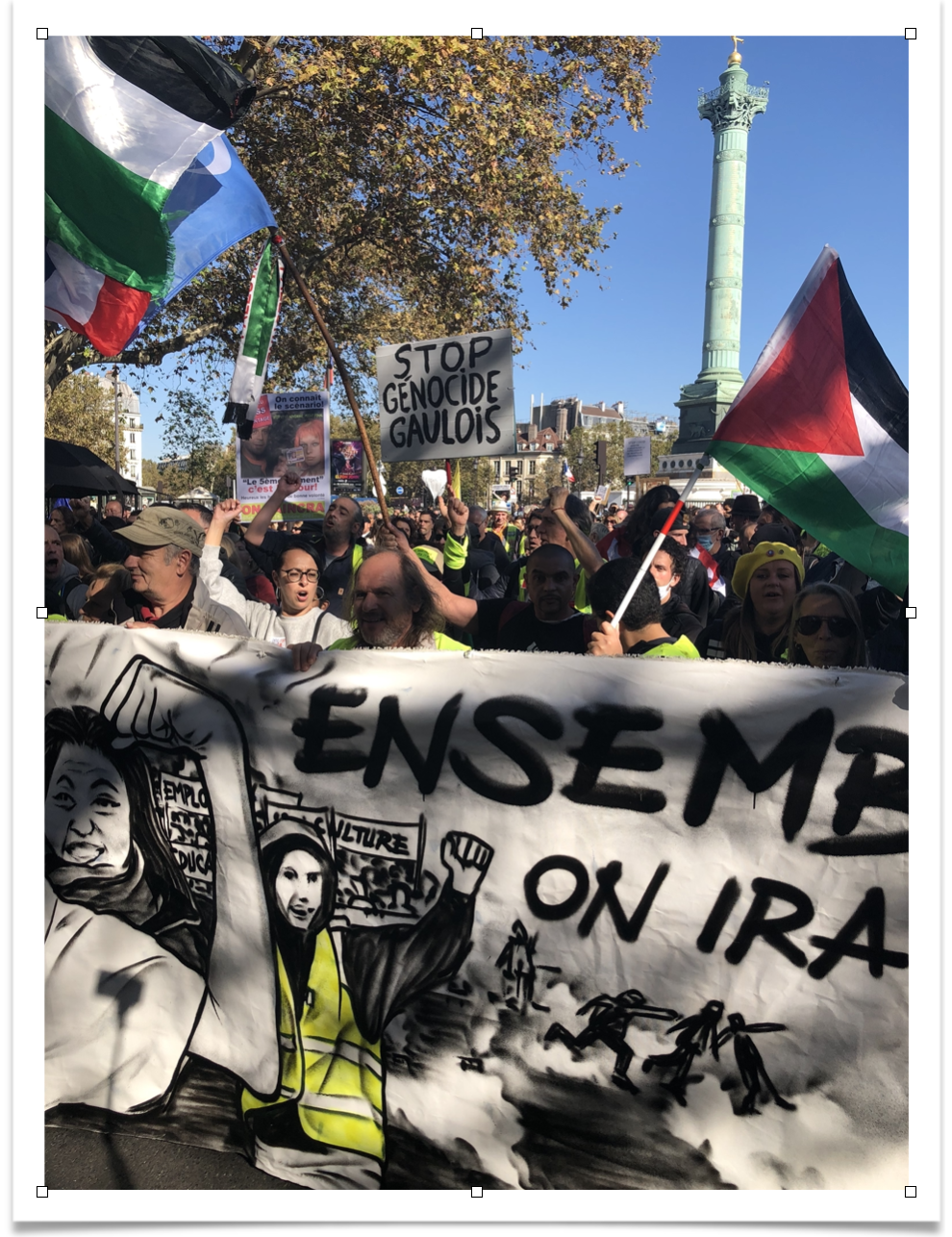 Last weekend, after more than one and half years away, the Yellow Vests hit the streets again for what they are calling “Season 2”.

You’re going to laugh and say, “But Season 2 of television programs are always worse!” Sure, for TV shows which turn out to be lousy. I find it hard to imagine that the Yellow Vests are going to sour into something unwatchable - in 2019 it was global can’t-miss politics.

French President Emmanuel Macron may appreciate the coronavirus because it provided the only time in his term, other than his first several months, when the streets weren’t swarming with protesters. There are self-centered Americans who claim that the corona hysteria was amplified in the West to push Donald Trump into losing re-election - some egotistical French say the hysteria was manipulated to get the Yellow Vests off the streets. Neither egos are totally out of control here, if you ask me.

Most everyone in France I talked with about the Vesters had the same response about Season 2: “The Yellow Vests still exist?” That’s fair - it has been a while.

I hate sounding like the perpetually self-referential Chris Cuomo of CNN, but no journalist in French or English attended more Yellow Vest demonstrations than I did… and even I had to catch up on what happened in the different epoch of 2019!

All I can say after doing so is - wow… France’s state-sponsored repression in 2019 boggles the mind and stuns the pen. It should not be forgotten, and someone needs to get it right.

Which is why at the end of 2019 I thought it was necessary journalism to compile this, A News Chronology of France in 2019: The Year of Yellow Vest Rebellion. I recommend it to anyone who wants to know exactly what happened in 2019, in what order, how and why. It is 11,000 words but reviewing how the Yellow Vest phenomenon arose and exploded, and the depths to which France descended to repress it, makes for astounding reading even if Chris Cuomo would have penned it.

To condense it all into two lines from the introduction: “The metronomic sadism of certain, massive state violence was not at all a normal state of affairs, and yet Parisians were expending all their psychic energy to convince themselves that everything was indeed ‘normal’. … The question that France cannot quite answer is: are they still the coloniser, or are they now colonised?” Disgusting Eric Zemmour, who has risen to third in the April 2022 presidential polls, will say that France is the colonised - by Muslims. Nonsense: somehow the lowest socioeconomic class is the one pulling the strings which gutted France’s middle class? Yet he still gets all the airtime in the world. The Yellow Vests, however, get it right - France has been colonised by the European Union, which is indeed a neo-imperialist project that is openly and repeatedly anti-democratic. For this, Vesters get no airtime.

But they do get plenty of tear gas (a more powerful type began getting used in March 2019), and rubber bullets (or “flash balls” shot from “defense ball launchers” per the MSM), from a new police chief who was hired because the Prime Minister said that “Inappropriate orders were given to reduce the use of LBD (rubber bullets)” by the previous police chief, while protesters were forbidden from covering their face (are corona masks ok now?).

You really can’t make this stuff up: remember the “anti-Yellow Vest law”, the lockdowns, the deployment of the army, the reactionary and short-lived “Red Scarves”, the fake turnout numbers, the fact that Macron didn’t even utter the words “Yellow Vests” until April 25, the banning of rural demonstrations, the tear-gassed tourists on Bastille Day, Lobstergate, etc.

So, yes, Mr. and Mrs. Jean Q. Frenchy stopped going to protests around mid-May 2019. You can say the Yellow Vests grew unpopular but you’d be wrong - they were consistently around a 60% approval rating, which is a staggeringly high number for a protest movement, and a great score for a political party.

But don’t forget the victories: they stopped Macron’s privatisation of the airports, they forced him to back down on yet another austerity budget (thus ending 9 years of austerity), they got €10 billion in concessions (which was credited to raising France’s 2019 Q3 growth rate of 0.3% (remember how many years of awful quarters they had when 0.3% quarterly growth would be trumped up as proof of austerity’s success!)), they must get credit for inspiring the 2019/20 General Strike (France’s longest labor movement in history) and also - they refused to give up.

These are low numbers, because how many hurt protesters (including tourists) didn’t report their injuries, but the 1-year tally in late November was 11,000 arrests, 2,000 convictions, 1,000 imprisoned, 5,000 seriously hurt and 1,000 critically injured.

Incredible… and yet all the while France continued to claim to be a leader in human and political rights. As if Danton and Robespierre wouldn’t have guillotined themselves rather than be associated with the French government of today….

But we all know what happened right after the French union-led, which is to say incompetently-led, General Strike failed: ”2 weeks to flatten the curve!”

Well, at least it gave France a reason to have a new type of state of emergency. Recall that those started under Francois Hollande - executive branch power-grabs are not something started by Macron.

Season 2 of the West’s most advanced political group

Oh, wait - aren’t they Islamophobic, per the repeated accusations of the MSM? Well, then why did the head of the Paris demonstration feature a Muslim woman wearing a hijab? 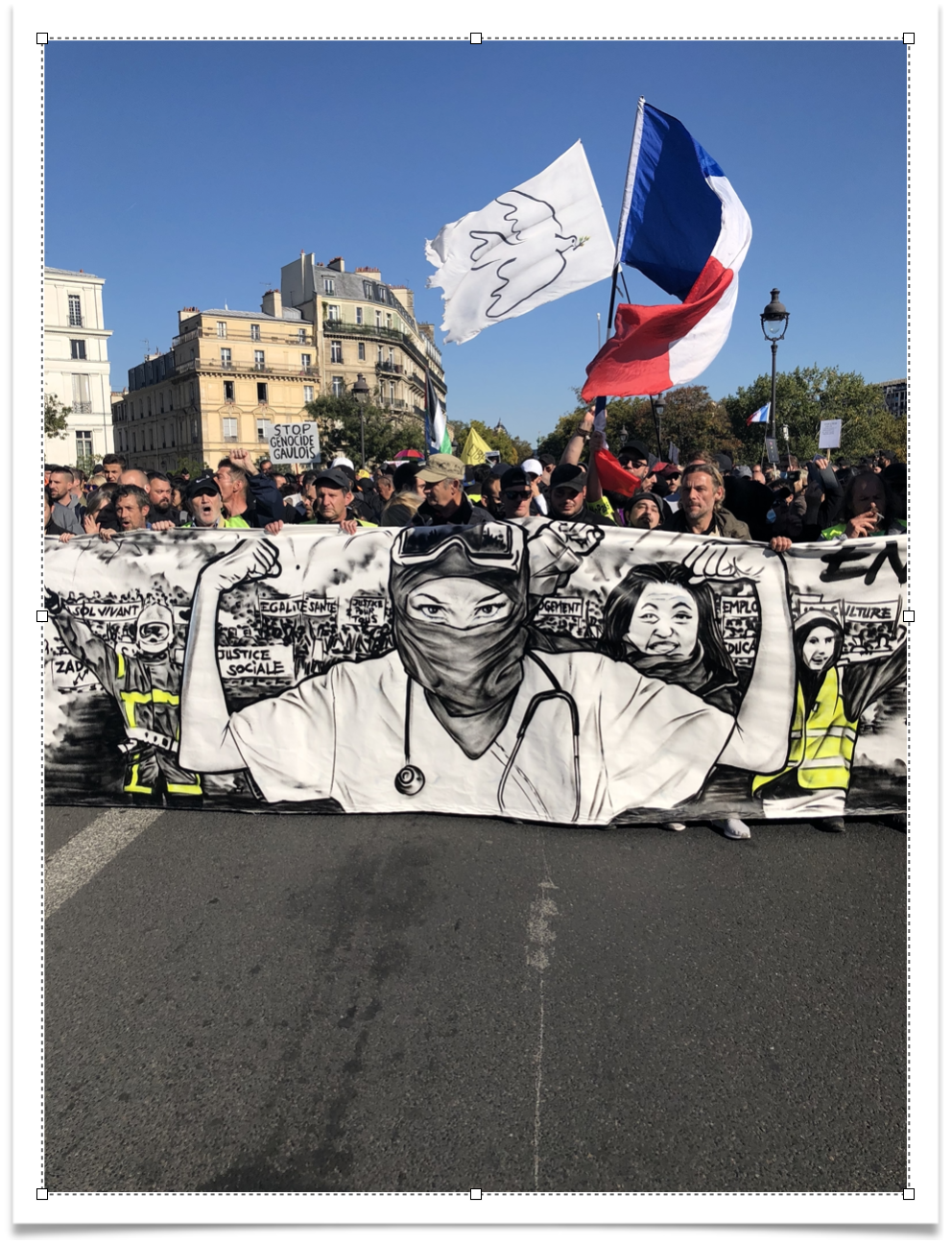 In 2019 they marched against both anti-Semitism and Islamophobia, by the way.

Nothing says, “The spirit of les Lumières (the Enlightenment)” like a machine gun at a peaceful, unarmed demonstration. Guess they don’t need to call out the army anymore? 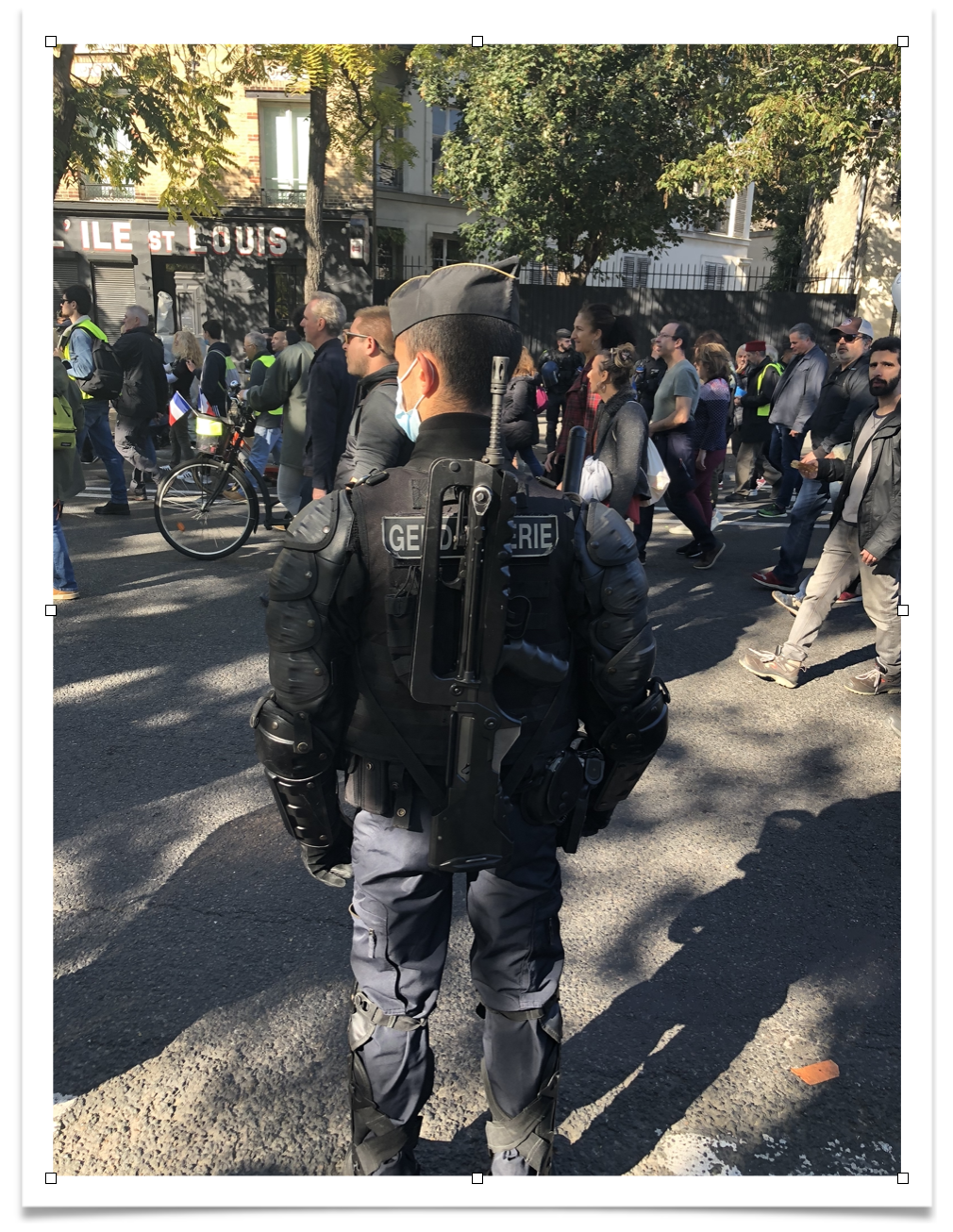 I counted about 1,000 at one of the Paris protests on the opening act of Season 2, and I estimated there were 300 planned demonstrations nationwide. The Yellow Vests have always been a rural-based movement, and because the MSM dismisses and denigrates rural areas they have consistently undercounted Vester demos by a third. Here’s a shot of the Paris demonstration to see for yourself. Notice the Palestinian flag, even though Vesters are surely racist, Islamophobic, pro-imperialist, etc.? 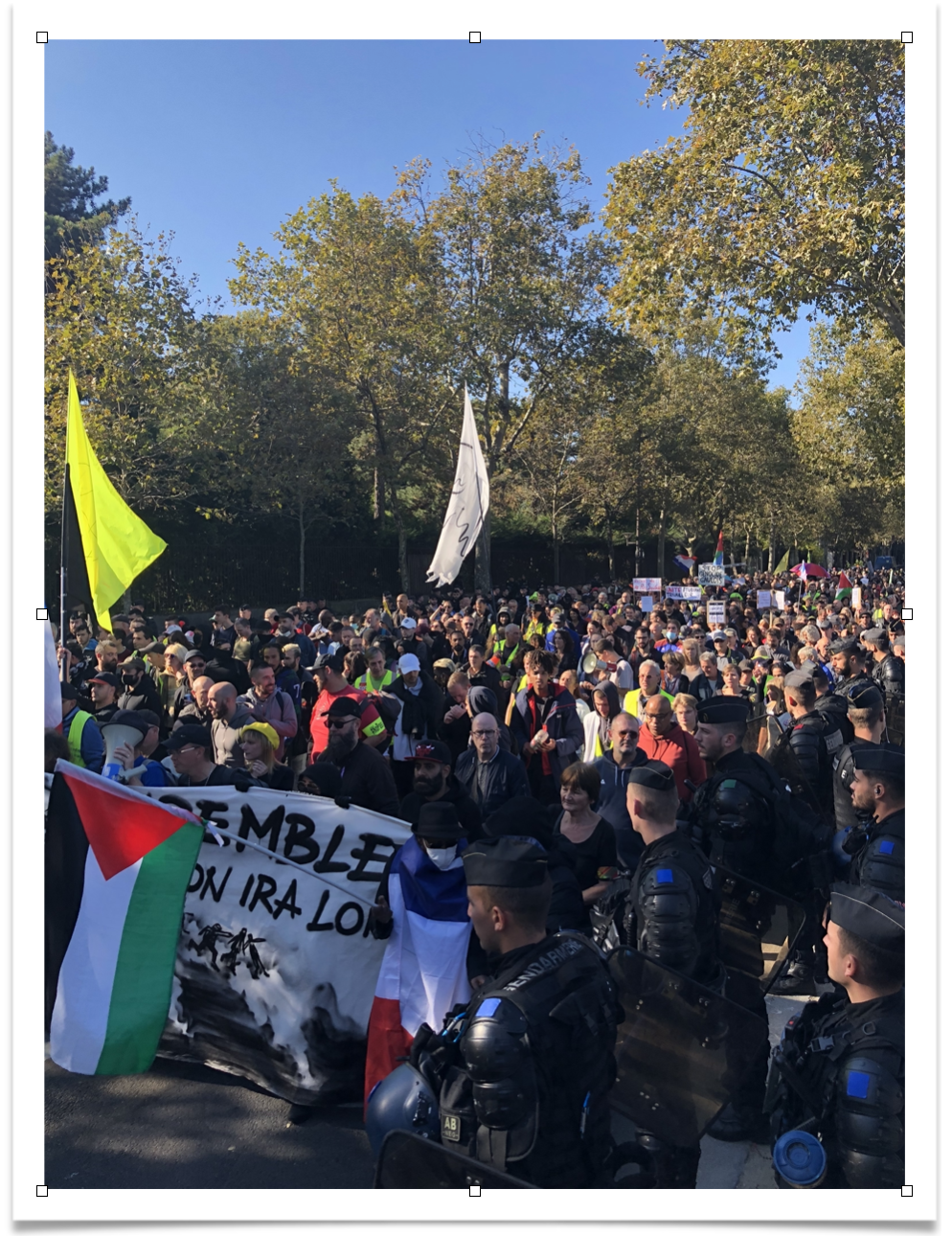 Here’s the TV report we at PressTV did on Act 1, Season 2 - you may not find any others. (Se below!) I surprisingly did see a lone major French media there, which was a huge increase from the usual French media presence of “none”. An RT colleague was there, as always, so it was quite the same as it was from mid-May 2019 onwards - mostly just the Russians and the Iranians covering the Yellow Vests.

So what’s going to happen this season? 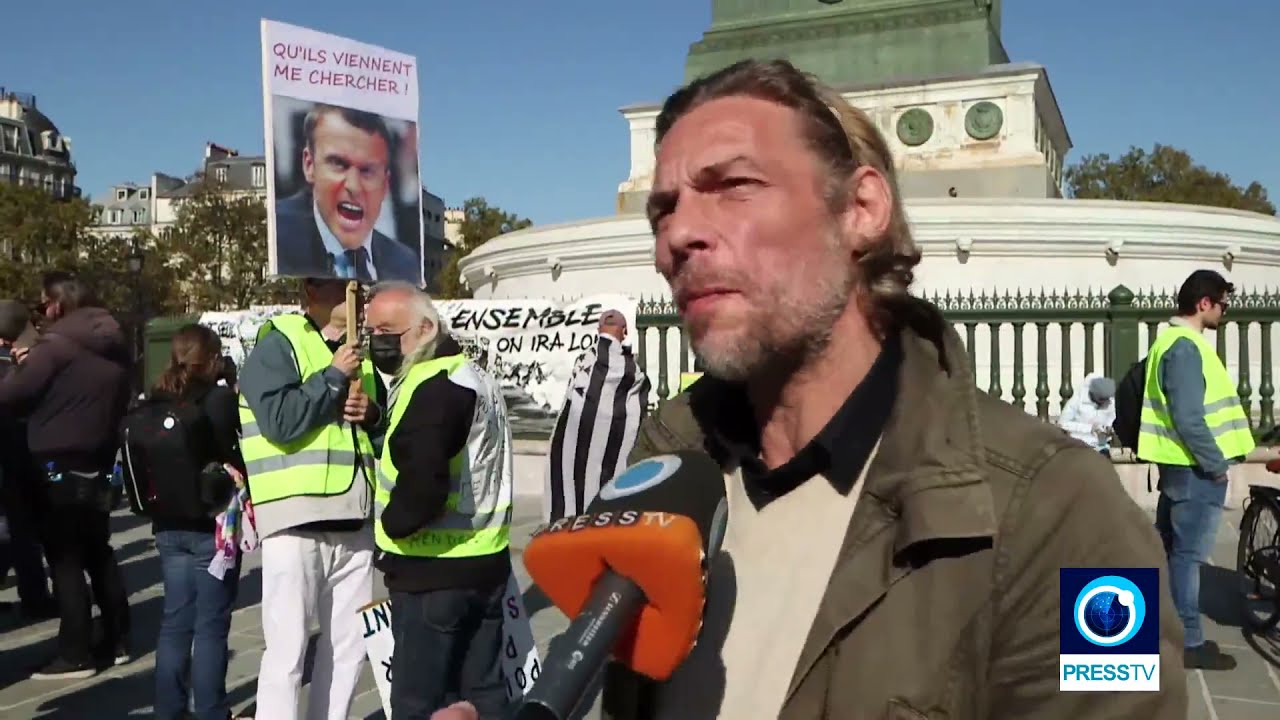 Well, the resumption of regular weekend repression of protesters would surely hurt Macron’s re-election chances, but will the average Jean and Jeanne Frenchy join them? Believe it or not, many people don’t like being tear gassed in 2021 as much as they didn’t like it in 2019. The massive state repression, the criminalisation, the tear gas, the beatings, the fines, the intrusive searches, the portraying of political protesters as mere rioters - the whole point was to scare away the average Frenchman, and it definitely worked.

People here tell me that Macron will just buy voters off with some one-off payments before the election, but Americans told me the same thing about Trump - I note that he did not.

The world is not going to lock itself down to sway the French election, like many said it seemed to do for the US election; the Western 1% really doesn’t care what happens to French protesters, and 2019 proved that emphatically.

If you’re going to pin me down for an early prediction, and fairly ask this foreign correspondent what exactly is going on in France, then at this point I’d say: Macron wins re-election regardless of how much petrol increases, inflation rises, the Vesters march, etc. for a simple reason:

The West postures on 18th century political and social achievements, largely disavowing 20th-century advances in political thought and anti-imperialism. Thus, France is a far-right country with a host of recent massacres, violence and repression which are forgotten or covered-up as soon as the smoke clears - look at the Yellow Vests of 2019. The Yellow Vests are emphatically not poseurs, but they were and likely will be incredibly suppressed ahead of the presidential election.

Apathy is always the forerunner of catastrophe - however, perhaps France will grasp that and not cede the political field to the economic and social far-right (Macron, Le Pen, Zemmour)?

The story of French political modernity is not over - Season 2 has only begun. 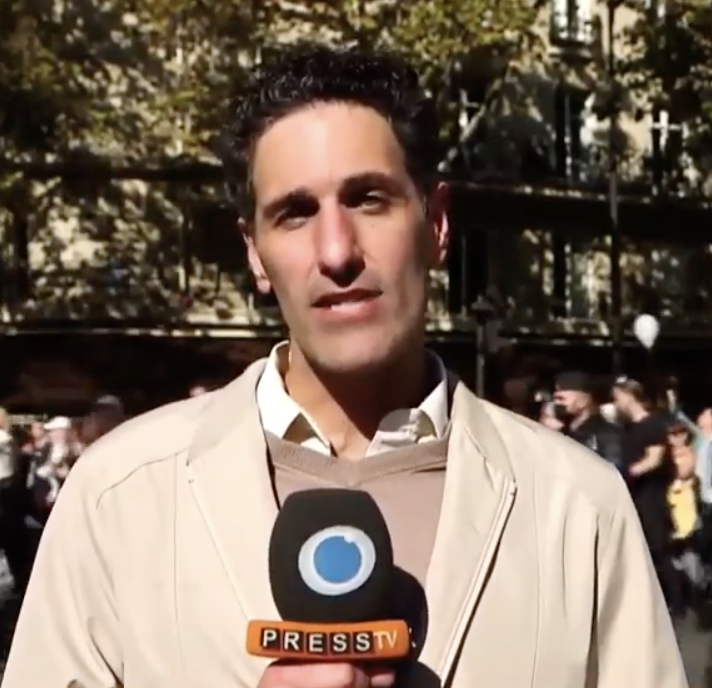 Ramin Mazaheri
is the chief correspondent in Paris for PressTV and has lived in France since 2009. He has been a daily newspaper reporter in the US, and has reported from Iran, Cuba, Egypt, Tunisia, South Korea and elsewhere. He is the author of ‘Socialism’s Ignored Success: Iranian Islamic Socialism’ as well as ‘I’ll Ruin Everything You Are: Ending Western Propaganda on Red China’, which is also available in simplified and traditional Chinese. Photos by Ramin Mazaheri