Home AMERICAN STUDIES The Fate of the West. 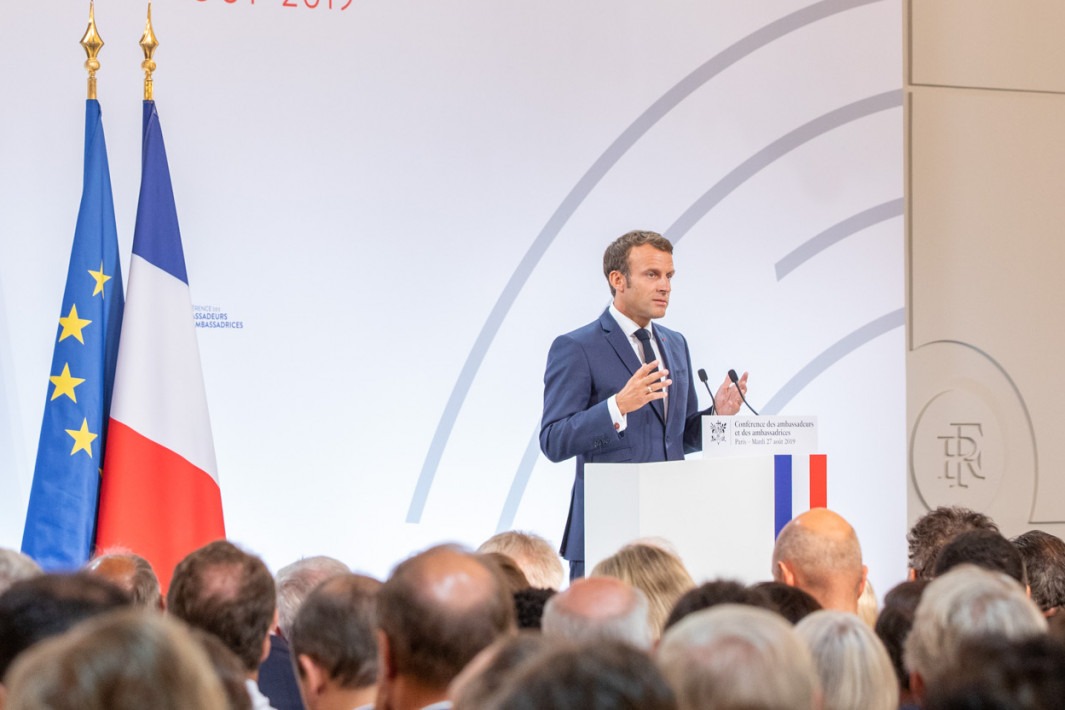 Macron bloviating: all western leaders do.

It is not very enviable. An acquaintance of mine who spent a good deal of time around the Atlanticist political top and knows many people there personally sent me his (her) thoughts on the issue of "elites" (I know the identity of this person, which should remain obscured for now) in which notes of this significance appear:

I saw all these people and many others like John Bolton, etc., and you are absolutely correct in that they are irredeemably obtuse - clever at manipulation of their own populations while driving their empire to ruin even as they fuck up one project after another and label it a triumph, leaving death, misery and disaster in their wake. I'm thankful they are as stupid as they are wicked (evil has that effect over generations), but that is also still dangerous for the rest of us. Regarding the France article, the evil is generational and (in my view) ultimately spiritual in nature. If you examine the Dutroux affair in Belgium, you will find a nexus of NATO, politicians and nobility, satanic cults, high finance, organized crime, media and the Catholic hierarchy, rather like P2/Gladio in Italy, Jimmy Savile and MPs in Britain, or the Franklin pedo scandal in America which also tied in to cults and Iran Contra. In the UK case, London residency of KGB FCD had identified these rings as being under the protection of British intelligence. Similar revelations have also come out of Australia. Not to mention Epstein...It is all extremely dark and people have lost their lives attempting to expose it. That's the nature of the "elite" that rules the crumbling West today. Not many people can handle that all the same.

Well, evidently some French journalists had it with Macron:

Translation: Gérard Davet and Fabrice Lhomme: "We sought to unmask Emmanuel Macron" The journalists Gérard Davet and Fabrice Lhomme publish, this week, “The traitor and the nothingness” from Editions Fayard. A 630-page investigation into the accession to power of Emmanuel Macron and his five-year term. "Some will find that the returned image of the President is not that bad, others that it is overwhelming," they explain.

The leading nations of the West are lacking in leadership worthy of the name.

Read the whole thing (use Google Translate) and you will get the idea how human "nothingness"  (an apt definition) do betray their countries. Here is one quote:

The "thing" of Emmanuel Macron is that he is flirtatious, charismatic, clever, making the person in front of him believe that he is the most important in the world. He sends back to his older interlocutors the image of who they were or what they wanted to be. And Brigitte Macron plays a major role in this mechanism. She is present at every important moment.

Yes, they all are--they all are avatars, holograms with zero capabilities to run anything, and still, who is guilty that this kind of human material gets elected? In Macron's case, France. French people--they elected him, they fell for his utter BS and agreed for their country to be finished off. Same goes for the United States--no matter what were the manipulations at the ballot box--the fact that half the country voted for a senile, demented, con-artist and swamp creature--sorry guys, you wanted, you got it. [Not that the vile incumbent nincompoop was much better, both representing essentially the same oligarchy.—Ed] Now live with the consequences. This is how the decline of civilization looks like: perverts, pedophiles and con-artists at the top, ignorant "bread and circuses" masses on the bottom.

This is the reason why today Vladimir Putin speaking at Valdai reiterated his (and many others') point that:

“Everyone says that the existing model of capitalism, which is now the basis of the social order in the vast majority of countries, has run out of steam,” Putin said. “There is no longer any way out of the tangle of more and more confusing contradictions.”

Obviously, this is not news to anyone who didn't slumber under the rock for the last 20 years and saw how modern model simply stopped producing real wealth and value. Now we have a new version of FIRE woke capitalism which is a direct path to a complete totalitarianism and a bacchanalia of human depravity, led by people akin to Macron and his ilk. So, expect new Macrons, new Bidens and new Epsteins emerging from the murky depths of the West's political machine. Yes, I know, sounds depressing but it is what it is. Modern West and globalism are one and the same and the rest of the world doesn't like it, and West's departure from its dominant position is one of the indicators that the system doesn't work anymore. There is a lot more to be said about this whole thing but for now I need to run to do some chores, after that we may discuss the issue of China's test of hyper-sonic weapon, which evidently, shook the United States and forced Pentagon to declare:

Right. "Components" of "prototypes". In related news, the tests of components of the prototypes of apple pies, like flour and apples, have been conducted in a number of households around the world and those tests have been successful, so in the future some apple pies could be baked. As Scott Ritter stated commenting on this launch about US efforts:

Pro hint: It’s not an arms race if one side is spending all the money while losing ground.

I am blunter for the last 10 years: the West lost the arms race because it was preparing for the war which nobody is going to fight. So, it is not just a technological gap, it is doctrinal, and this one is much harder to close.

Posted by smoothiex12
ANDREI MARTYANOV is an expert on Russian military and naval issues. He was born in Baku, USSR in 1963. He graduated from the Kirov Naval Red Banner Academy and served as an officer on the ships and staff position of Soviet Coast Guard through 1990. He took part in the events in the Caucasus which led to the collapse of the Soviet Union. In mid-1990s he moved to the United States where he currently works as Laboratory Director in a commercial aerospace group. He is a frequent blogger on the US Naval Institute Blog. He is author of Losing Military Supremacy, The (Real) Revolution in Military Affairs, and Disintegration: Indicators of the Coming American Collapse.