IMPERIALISM IS ONLY THE DEGENERATE, MONOPOLY PHASE CAPITALISM 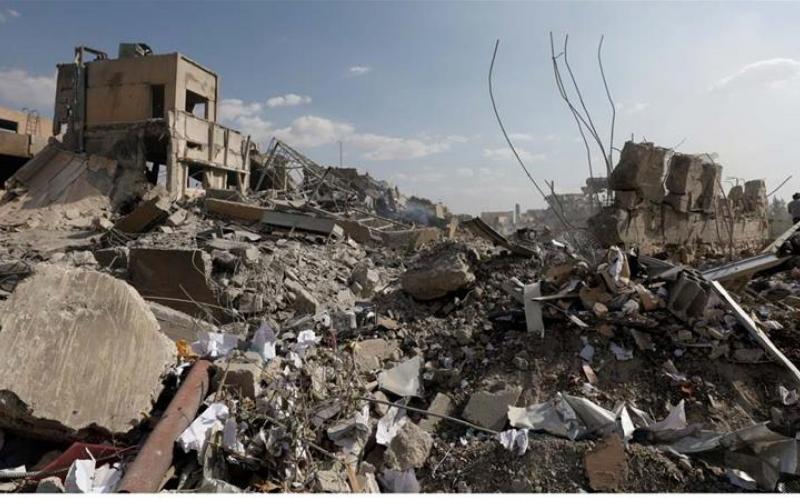 Syria in ruins, thanks to US bombing and its injection of ISIS and AlQaeda terrorists.

Washington is a criminal regime as its illegal wars and deliberate mass murder demonstrate beyond any doubt.

An important report published this week reveals in extensive detail the shocking scale of war crimes committed by the United States in the Middle East. Thousands of civilian deaths, including children, are documented as a result of aerial bombardments conducted by the U.S. military.

It is crucial to remark that the published survey – while voluminous involving thousands of pages and documents – represents only a fraction of the full scale of mass murder. The research focuses on Syria and Iraq over a three-year period between late 2014 and early 2018. Considering that U.S. forces have been occupying those two countries alone for over a decade and considering American military operations contemporaneously in other nations, one can safely assume that the full scale of murder perpetrated is orders of magnitude greater.

The report known as the Civilian Casualty Files was commissioned by the New York Times. It took five years to compile and tortuous legal wrangling to obtain secret Pentagon files. The survey also involved the authors visiting hundreds of locations in Syria and Iraq to record witness testimonies. A good summary is provided here.

Separately, it has been previously estimated that the U.S. decade-long war in Iraq from 2003 onwards caused over one million deaths. What this latest report provides is granular detail of the countless incidents of violence from airstrikes and drone assassinations. Times, dates, villages, hamlets, towns, families, mothers, fathers and children are named in the atrocities that were carried out. But as noted, while the reported information is huge, it is still only a tiny fraction of the full extent of mass murder.

What is disturbingly clear too is the cold and barbaric logic of the Pentagon chiefs and senior figures in both the Obama and Trump administrations. Sitting president Joe Biden was vice-president in the Obama administrations (2008-2016). Civilian deaths were deemed acceptable as “collateral damage” in the pursuit of military-political objectives. Whole families were knowingly obliterated in a haphazard and vague effort to kill suspected terrorists or simply to extend the writ of U.S. imperial power.

What’s more, the Pentagon and the U.S. government covered up the extent of their psychopathic operations. Not one member of the American military or White House administration has ever been disciplined – even internally – for the rampant criminality.

A more recent incident outside of the published study period cited above would fall into the typical mold. That was the killing of a family of 10, including children, in Kabul during the U.S. withdrawal from Afghanistan at the end of August. Recall how the Pentagon investigated itself and concluded that no one was to blame for that drone carnage. That case garnered some publicity because the circumstances of a historic U.S. retreat were in the news. Now just imagine how easy it was for the Pentagon to bury other mass murders of civilians that occurred in remote areas of Syria and Iraq.

The published Civilian Casualty Files is substantive evidence for prosecuting U.S. political and military leaders for war crimes. Realistically, this will not happen in the near future, but nevertheless, it is an important archive for future prosecutions and the historical record.

The information is also a devastating exposition of the moral bankruptcy pervading Washington. Thus, a mass-murdering regime in Washington has no authority to lecture, as it arrogantly presumes to do all the time, the rest of the world on human rights and rule of law.

Earlier this month, President Joe Biden convened a so-called “Summit for Democracy” for invited world leaders. Biden pointedly excluded Russia and China from the online videoconference, as well as other nations deemed to be “authoritarian” or “undemocratic” by Washington.

It truly is revolting that Washington has such hubris and shamelessness. U.S. governments have systematically waged illegal wars all around the planet involving the destruction of nations and millions of innocent lives. And yet the president of the U.S. has the audacity to pontificate to the whole world about the presumed virtues of democracy, human rights and upholding international law.

This grotesque duplicity and delusion of American leaders is why the U.S. is on a collision course with Russia and China. Washington relentlessly accuses Moscow and Beijing of alleged violations. The tensions being stoked by the United States over Ukraine and Taiwan are pushing the world to the brink of war.

Just this week, President Biden signed into law a ban on imports from China’s western province of Xinjiang. The U.S. accuses China of “genocide” against the minority Uighur Muslim population. Beijing categorically rejects the claims, pointing out that the Uighur population has actually grown over recent years. Beijing says that it takes security measures against radical Uighurs who have been weaponized as part of the U.S. 20-year war in neighboring Afghanistan. In any case, Washington does not provide credible evidence to substantiate its claims. The notable thing is that such lecturing by the United States towards China serves to aggravate tensions which exacerbate other issues over Taiwan and the Olympic Games that Washington is boycotting.

Washington has zero moral authority. It is a criminal regime as its illegal wars and deliberate mass murder demonstrate beyond any doubt.

It should be observed that the Western media largely remained silent this week over the shocking Civilian Casualty Files. The New York Times deserves some credit for publishing the information conducted by outside authors. However, the monstrous scale of criminality has been met with stunning relative silence. That illustrates how the Western media is actually a propaganda system that cannot compute or comment on information that is incongruous with its day-to-day coverage.

The injustice against imprisoned whistleblower Julian Assange should also be highlighted. The mass-murder programs uncovered by the Civilian Casualty Files vindicate Assange and Wikileaks’ earlier publications exposing U.S. war crimes. It is an abomination that Assange is being persecuted and awaiting extradition to the United States where he could be jailed for the rest of his life on fabricated charges of “hacking and espionage”.

The criminality and duplicity of U.S. governments is something to behold in a perverse sort of way. It is astounding that the world is being driven further towards dangerous tensions and possible confrontation by a regime whose record is so nefarious and hypocritical. How is such a gross deception enabled? That is partly due to the function of a Goebbels-like mass media that pretends to publish news instead of propaganda.

Finian Cunningham is an award-winning journalist. Originally from Belfast, Northern Ireland, he holds a Master's degree in Agricultural Chemistry and worked as a scientific editor for the Royal Society of Chemistry in Cambridge, England, before entering a career in journalism.

The Stalin question: Remarks on Interview of Professor Stephen Cohen on RT.COM on November 1, 2015

What If U.S., NATO Talks Are Cover for More Aggression Towards Russia?