Home RUSSIAN MIGHT UKRAINE: THE POWER OF AN IDEA AND THE PR PRESIDENT

UKRAINE: THE POWER OF AN IDEA AND THE PR PRESIDENT

The West has figured out how to weaponise idealism in pursuit of its filthy goals.

May 10, 2022 7 minutes read
Please make sure these dispatches reach as many readers as possible. Share with kin, friends and workmates and ask them to do likewise. 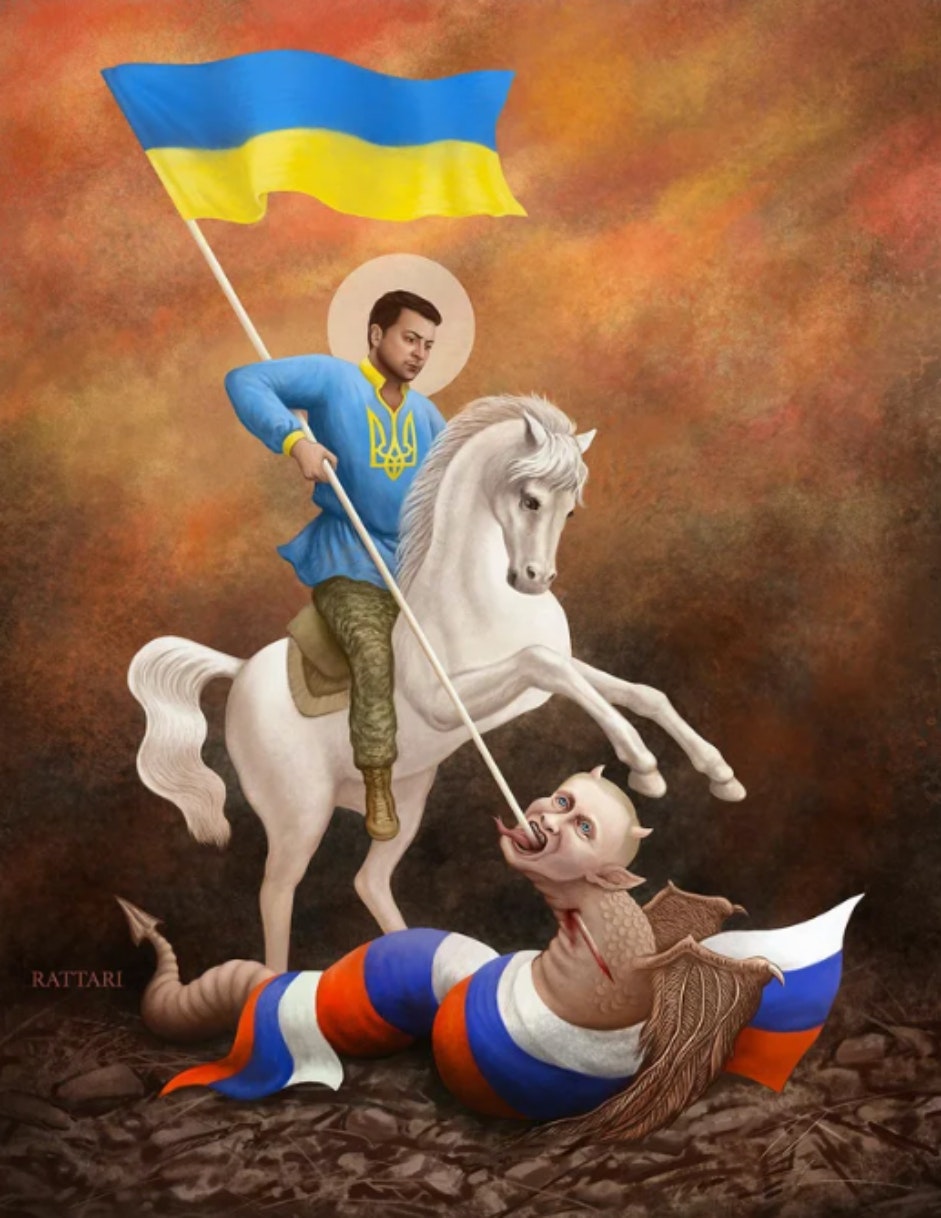 No matter what anyone’s feelings are regarding the rights or wrongs of Russia’s actions in Ukraine, you have to admire the success of the public relations campaign behind Volodymyr Zelenskyy. The level and supreme coordination of the unlimited support he has received and achieved across Europe is unprecedented.

At its source is the power of a single idea, that in this wicked old world of ours there is still an antiseptic and clear division between good and evil. This idea has almost unlimited mileage in this world which was previously ever-rapidly moving toward total cynicism. Like Live Aid in the Eighties, the cause of Ukraine has allowed for a vast upsurge in idealism, a cleansing of the soul by a cathartic anger combined with compassionate grief.

Western humanity has taken Ukraine to its heart, oblivious to any warts that may be transferred in the process. No, it’s warts and all, till death do us part, a marriage ceremony blessed by every liberal institution across the western world. In furtherance of this marriage comes the weaponry to protect it, a sworn duty to assist in the defeat of all those who would tear this great union apart.

Blessed by every high priest that can be found and all those of the secular variety who have newly wiped the blood of the Iraqis, Syrians, Afghans and Libyans from their raiments… to be born again, cleansed by the holy public relations of total, unquestioned belief in their communal rightness.

It is said that up to a hundred public relations companies have been set to work devising strategies and campaigns to deliver the “truth” about every aspect concerning Saint Zelensky and his acolytes, his hand-maidens and supplicants. Every move he makes is choreographed with a precision usually accorded to the high and mighty of this world and to a far greater extent even than for those illustrious figures.

Technology has been brought to bear in every aspect of the bringing of Zelensky’s holy word to an adoring public who hang on his every word. Politicians of all descriptions go dewy-eyed at the mere mention of his name. The only personality that could possible do better and inspire such an outpouring of devotion would be JC himself come down on his fiery chariot to smite the heathens who besmirch his holy name.

For yes, this is a crusade, a mighty army has been recruited, indeed has volunteered. Such is the popularity and public relations success of Mr Z that the entire panoply of great liberal beats of the political, cultural, commercial and social whirls constantly arrive at his feet to touch his hem. (Or perhaps his trouser bottoms… but that doesn’t quite have the same ring to it, does it?)

It’s all a tremendous success, a tour de force that social historians will reference for decades to come. A phenomenon to be studied in great detail mapping each triumph along the way…

Meanwhile, in the rather more real world, the Russian military grinds slowly forward tackling each massively fortified village, town and city one by one in Northern Lugansk and the vicinity of Donetsk City. Poposnaya (Popasna), a city of some 20,000 in normal times, the gateway to the more northerly much larger conurbations of Severodonetsk and Lysychank, has just fallen to the Russians. Expert analysis says that these too will fall given time, perhaps a month or a month and a half from now. Russian forces will then descend on the last remaining Ukrainian forces in the vicinity of Donetsk City and they will be eliminated also. That will be it. Game over. The entirety of the Donbass will be secured, one of the prime objectives of the Russian campaign

Will the Zelensky spectacular continue with this news? I don’t know. It’s quite hard to say as the momentum behind it is supremely strong having the near infinite backing of the entirety of western liberal power in both Europe and the USA. Will rump Ukraine be saved by Poland making it a protectorate, a sideways shuffle into the EU? Perhaps.

But in some form or other the show will go on. The power of that idea of good and evil battling it out in a passion play with as simple a plot as can be made possible will have a momentum and dedicated belief system behind it that I can’t see an instant deflation of its big PR balloon happening overnight.

What is most likely is that there will be the briefest of poses as might happen at the greatest party you’ve even been at when someone knocks something over and it sounds like a gunshot. There’s a momentary shocked silence and then the whole shebang kicks off again as if nothing happened, no one got scared, it didn’t reveal any jerks with weak-knees at all, everyone keeps laughing and dancing the night away with gay abandon.

When it is realised that Russia has permanently removed a great chunk from Ukraine I imagine there will be a brief wrinkling of brows and sturdy words of never-ending support for the “sovereignty of Ukraine” and so forth… but the brave willies of the West will certainly do nothing more than pout.

But what a party it will have been! Catharsis will have been achieved. A vast cleansing of the western psyche after the debauchery of Afghanistan, Iraq, Libya and Syria will have taken place, the communal computer will have had its hard disk memory wiped. What joy. The PR party that saved Ukraine while destroying it will without doubt go on in some form or other, perhaps in a form where a great moral outrage arises due to the sudden influx of gun crimes and terrorist attacks across the most pristine of European capitals. Oh what a party THAT will be!

While, back in Ukraine, a country largely hollowed out, abandoned perhaps by 60% of its original population will have a permanent begging bowl extended to a Europe and USA seeking donors for their own begging bowls.

Perhaps a PR offensive will be called for? But who will pay the piper THEN?

Oh well, it all seemed a good idea at the time.

And what of Mr Z? Where will he end up?

No doubt he’ll be okay. His fans won’t let him down, surely?

I would expect he will become an EU commissioner, or some sort of ‘special adviser’ within that select liberal cabal. They do look after their own you know. So, he’ll be fine. A fresh shirt each day, a chauffeur and sleek black car with tinted windows, a high-security villa or two and a few hundred million euros in the bank.

UKRAINE: THE POWER OF AN IDEA AND THE PR PRESIDENT

Will the US and Germany Turn Mongolia into a Biological Warfare Testing Grounds against Russia and China?