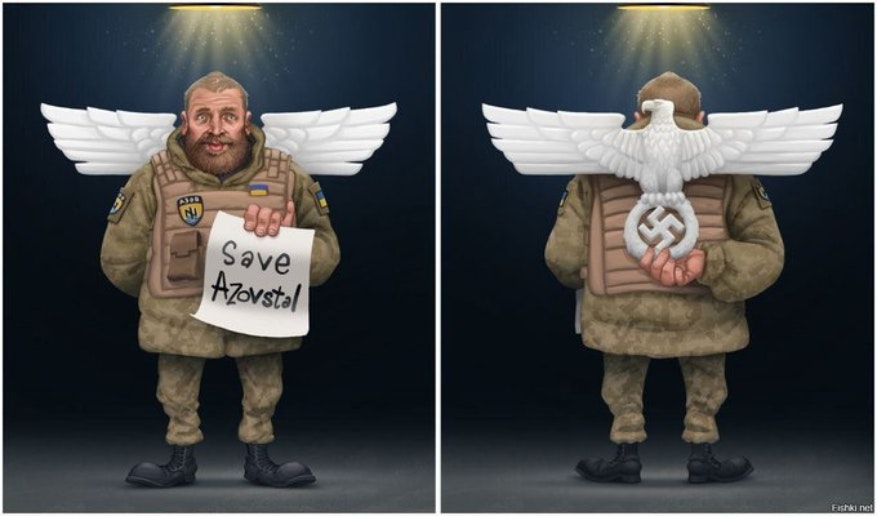 The way western political and media elites are portraying the current surrender of those now emerging from under the Azovstal steel works in Mariupol is extremely enlightening.

The word being used right across these two elites for the surrender of those who have largely been living underground there for weeks now along with their civilian captives is ‘evacuation’.

They portray this capitulation of Nazi-mentality thugs as some kind of heroic ‘Dunkirk-style’ saving of grace for these sadistic swine.

Journalism has virtually now ceased to exist around the entire sphere of activity known as western mainstream news. All pretence to integrity of reporting has vanished when those who laud Hitler and his Nazis can be greeted by wails of sympathy when they are forced to emerge and surrender themselves.

The Gestapo could not have been more proud of the way abject evil can be turned into sweetness & light glory. Joseph Goebbels would certainly nod in appreciation of the wall-to-wall uniformity of the message.

It is almost as if there exists a network of editors, commentators, pundits and politicians who have the ability to instantly message the current buzzword to be used in any given circumstance.

So we have these glorious “heroes” of the West that at one time they even warned the world about (when it appeared western interests might be threatened). Now that they have a common enemy in Russia, those with a murderous Nazi-mentality are their friends.

Thus they have been ‘evacuated’ and no doubt Zelensky will have played some key part in achieving this “success”. Here we see just HOW far so-called journalism and “news” broadcasting has fallen in the West. Down to the same depths of depravity where their political class now dwells.

Down just as deep as these Nazi rats that now emerge from the darkness that they were so well suited for.

The Nazis did not apologize, they were not afraid, but they could not look us in the eye.

Neo-liberal or neo-Nazi, they all look the same to me….