Hollywood celebrities remind us that, in general, liberals have no backbone and worthless muddled principles.

September 14, 2022 11 minutes read
Please make sure these dispatches reach as many readers as possible. Share with kin, friends and workmates and ask them to do likewise. This August, during the Department of Defense’s annual Warrior Games at Disney World in Orlando, Florida this August 19-28, liberal comedian Jon Stewart awarded a Ukrainian military veteran named Ihor Halushka the “Heart of the Team” award for “inspiring his team” with his “personal example.”

Halushka happens to have been a member of the neo-Nazi Azov Battalion, which has been armed by the US and integrated into the Ukrainian National Guard. The award-winning ultra-nationalist wore a sleeve over his left arm as he accepted the prize, presumably to cover up his tattoo of the Nazi Sonnenrad, or Black Sun. 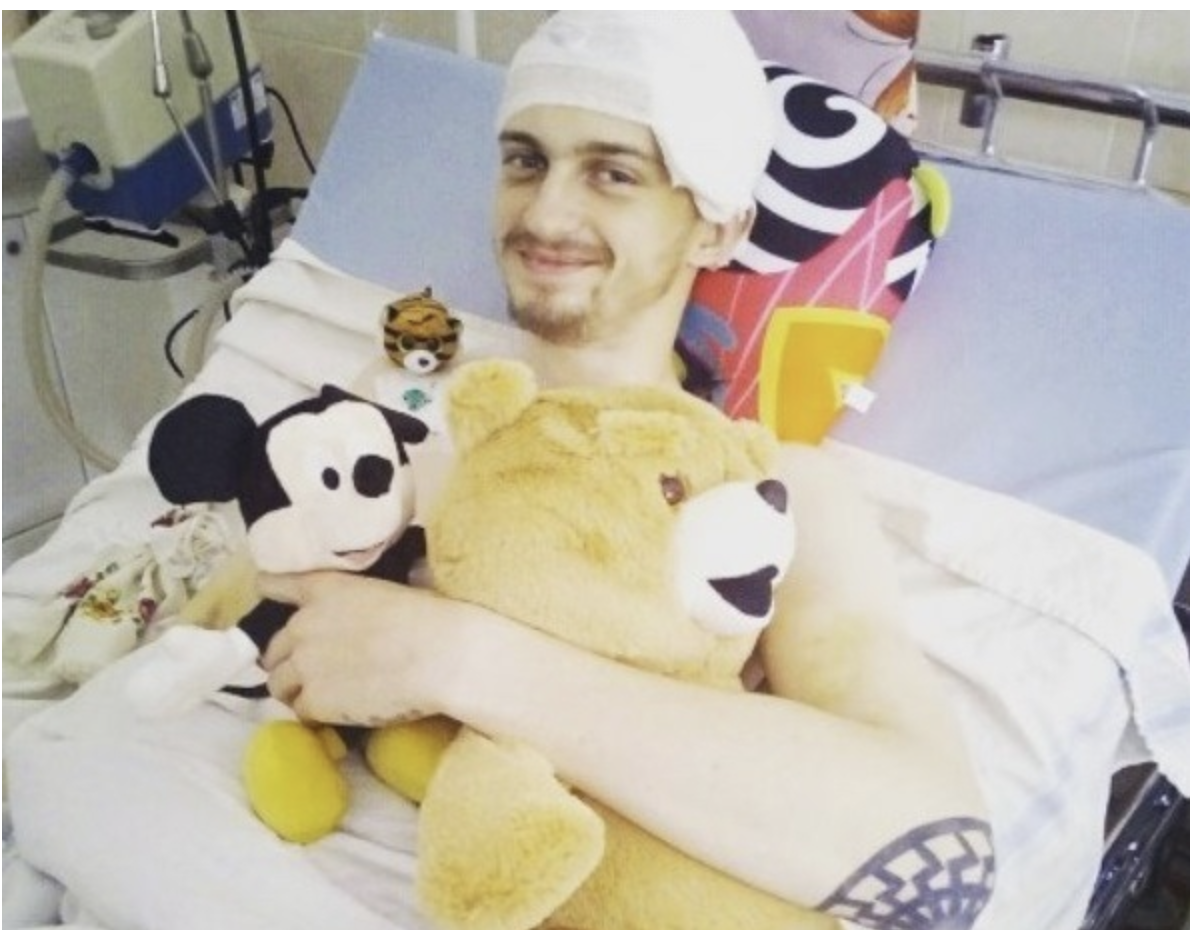 The pair are part of a team of forty Ukrainian veterans participating in the Warrior Games. They were joined at the ceremony for this year’s competition by Darius Rucker, the former vocalist for the glorified bar band Hootie & the Blowfish, and liberal comedian Jon Stewart. 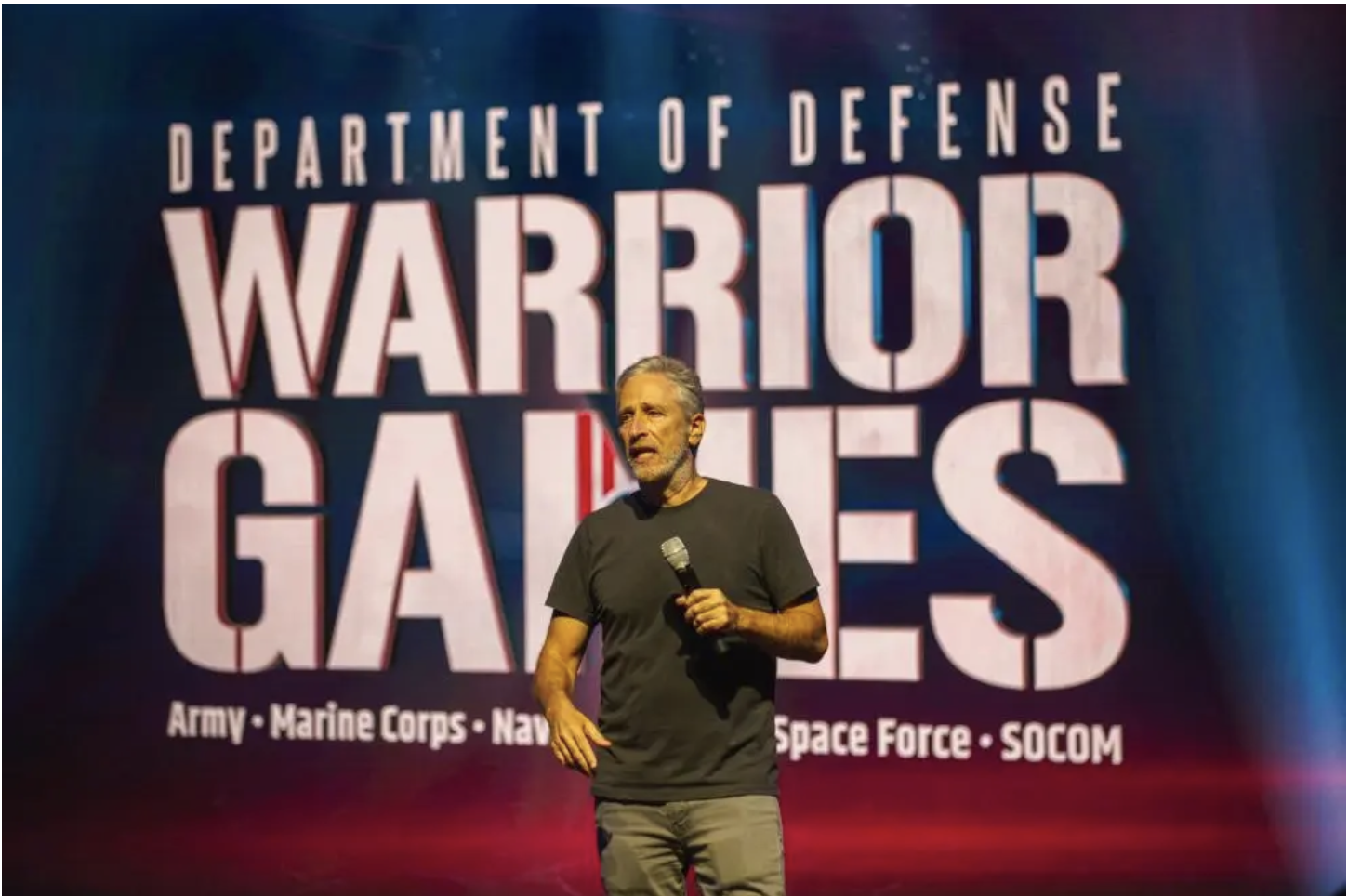 During the closing ceremony, Stewart awarded the Azov Battalion’s Halushka with the “Heart of the Team” award. The announcer proclaimed that Ihor “inspires his team with his personal example and his unique sense of humor. Sgt. First Class Ihor Halushka embodies the spirit and determination that is the heart of Team Ukraine.”

Stewart triumphantly bellowed “Ihor!” as  the Nazi was presented with his trophy. 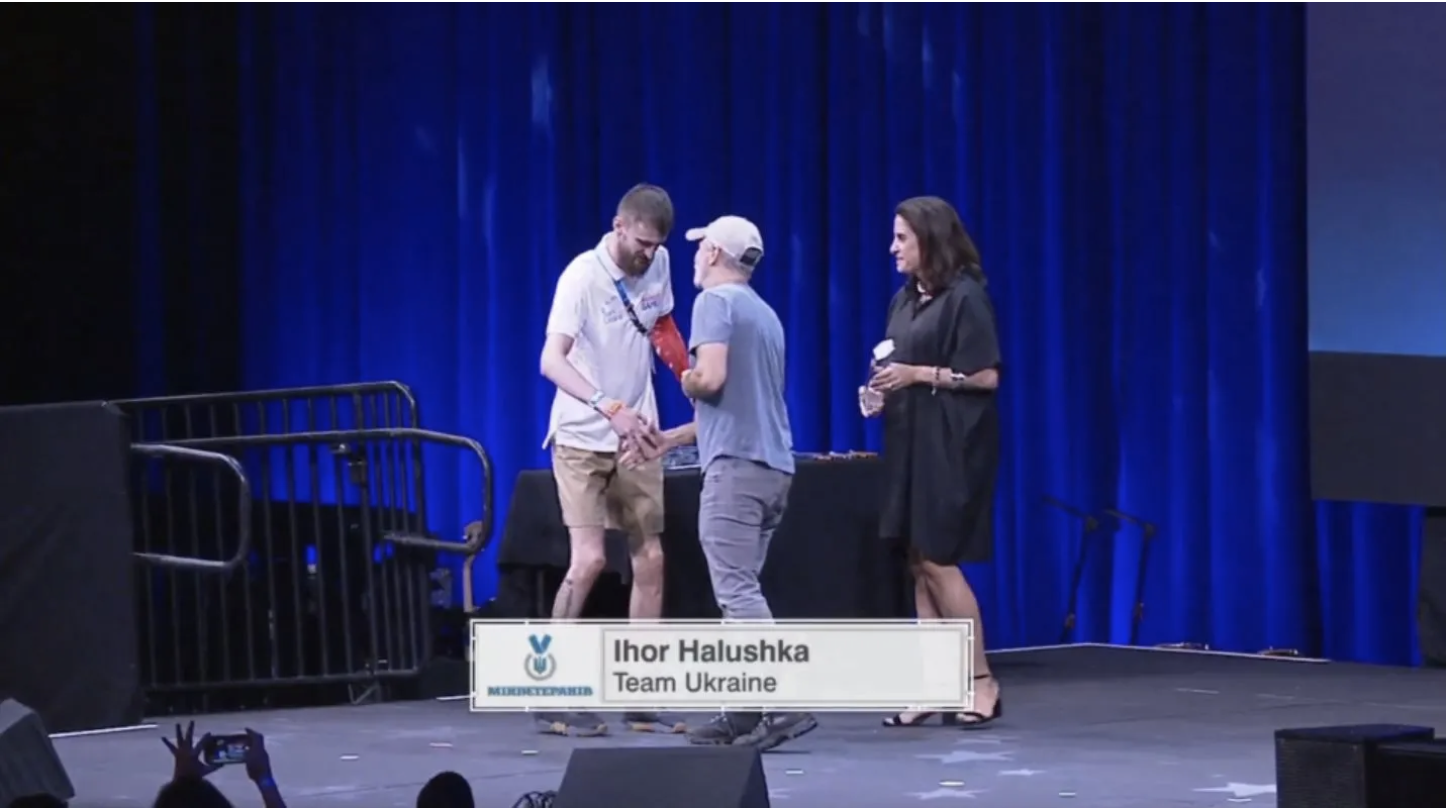 Prior to Russia’s invasion of Ukraine in February of this year, mainstream outlets from the Daily Beast to Vox to Foreign Policy, and even the US government propaganda outlet Voice of America, have each acknowledged the Azov Battalion’s embrace of Nazism. Right Sector group has been similarly identified as a fascist organization. Since the invasion, however, Western corporate media has downplayed the presence of Nazis in the Ukrainian armed forces as groups like Azov have taken on prominent front-line roles.

Reached by phone, Warrior Games communication director Travis Claytor would not tell The Grayzone who covered the travel expenses of Team Ukraine and other foreign competitors. Claytor merely stated that the Department of Defense is “not responsible” for their costs. However, he noted that “the relationship with each team is different.” Ukraine and Canada are the only foreign teams participating in this year’s competition.

While promising this reporter a more complete response by email, Claytor has so far failed to deliver.

A video on the DoD Warrior Games YouTube channel entitled “Family Night at Magic Kingdom” shows some members of Team Ukraine enjoying a night out at the world-famous theme park. 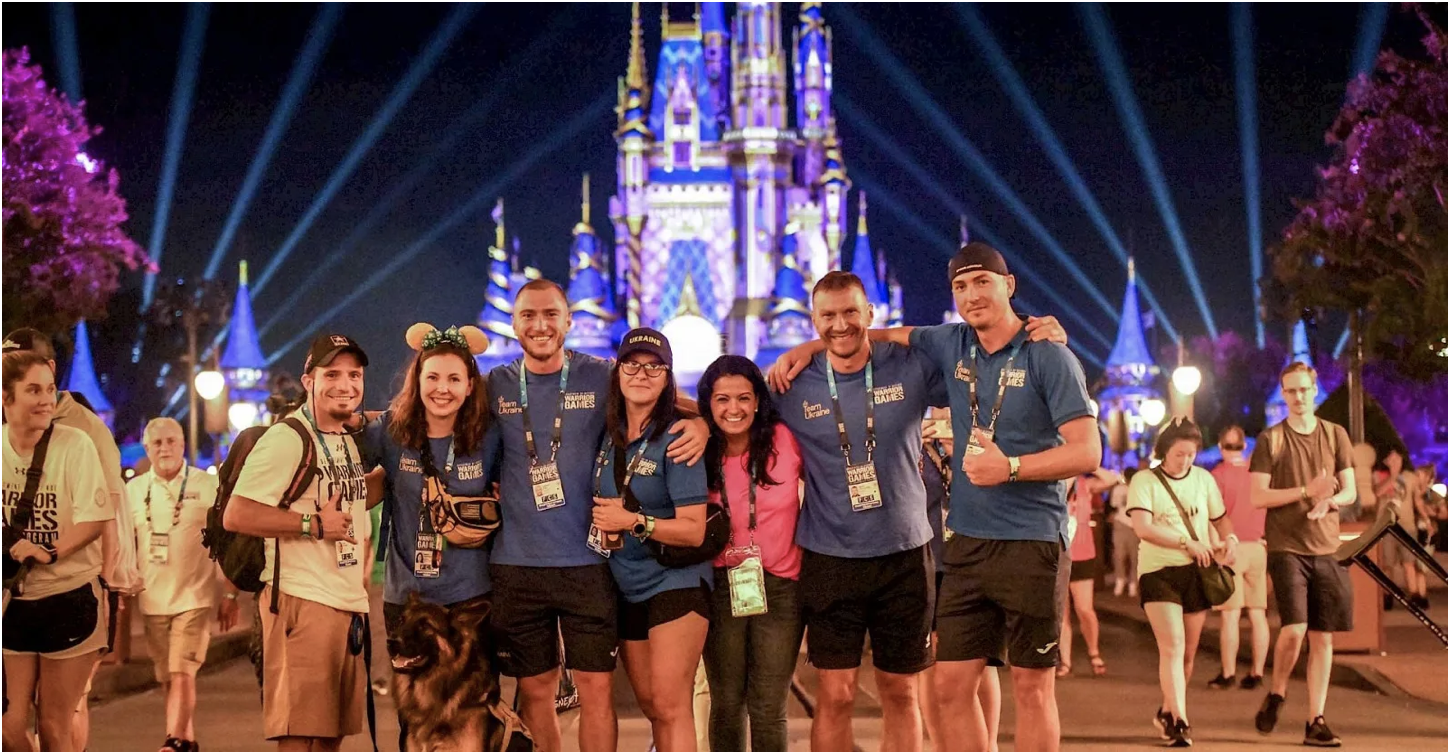 Team Ukraine at the Magic Kingdom. Photo via Fisher House

This is the first year Team Ukraine has participated in the Warrior Games. Its athletes came away with at least 18 gold medals.

Ukraine’s team is composed of the same veteran-athletes that participated in the Invictus Games, a similar competition of wounded veterans founded by Prince Harry after the English royal attended the Warrior Games. Ukraine’s Invictus Games team and Warrior Games team are both led by Oksana Gorbach, according to the Ukrainian Ministry of Veterans Affairs. 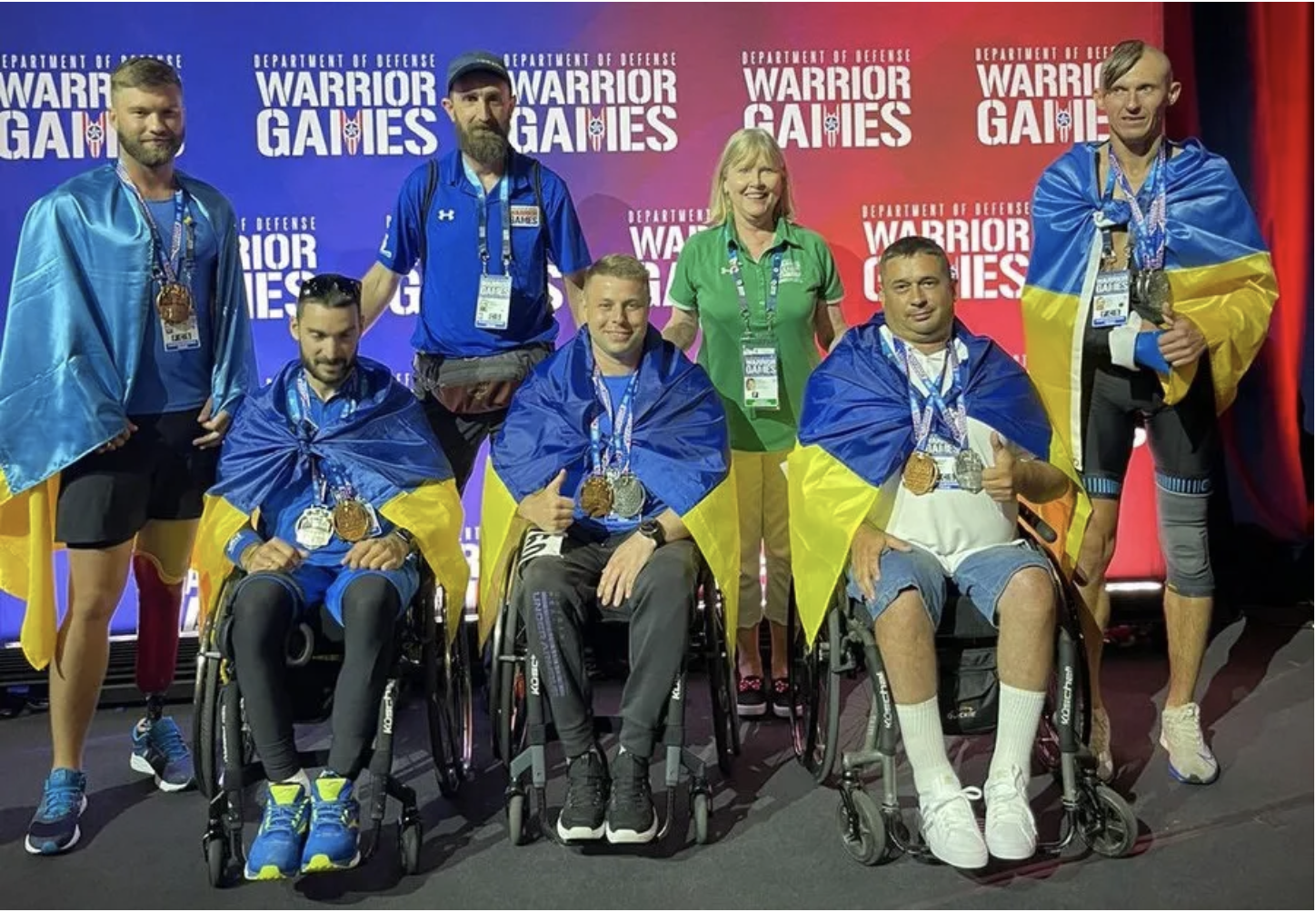 More members of the Ukrainian team at the DoD Warrior Games. Via Fisher House

According to a deleted article from 2017 on an Azov Battalion website, at least three members of the notorious ultranationalist fighting force have participated in the Invictus Games. Because Azov identified the competitors by their call signs, and therefore did not disclose their real names, it is not possible to determine whether they also competed in the 2022 Warrior Games. 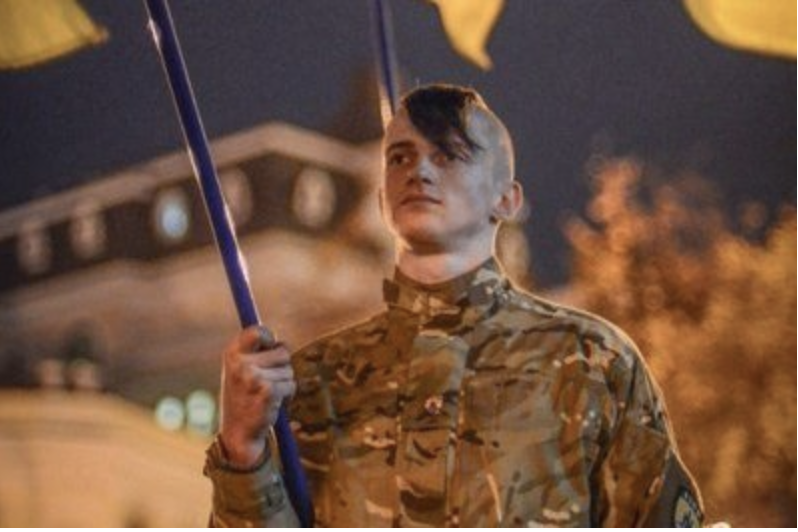 Ihor Halushka circa 2014. The Azov Battalion’s patch is visible on his left arm.

While the team page on the Invictus Games website merely states that Ihor Halushka was a member of Ukraine’s National Guard, an expanded bio on the website makes it clear he was a member of Azov.

An unlisted YouTube video by the Invictus Games on YouTube offers a close-up of Halushka working out with Nazi Black Sun symbol tattooed on his left elbow clearly visible. Halushka opted to cover the fascist symbol during photo ops at the Warrior Games. 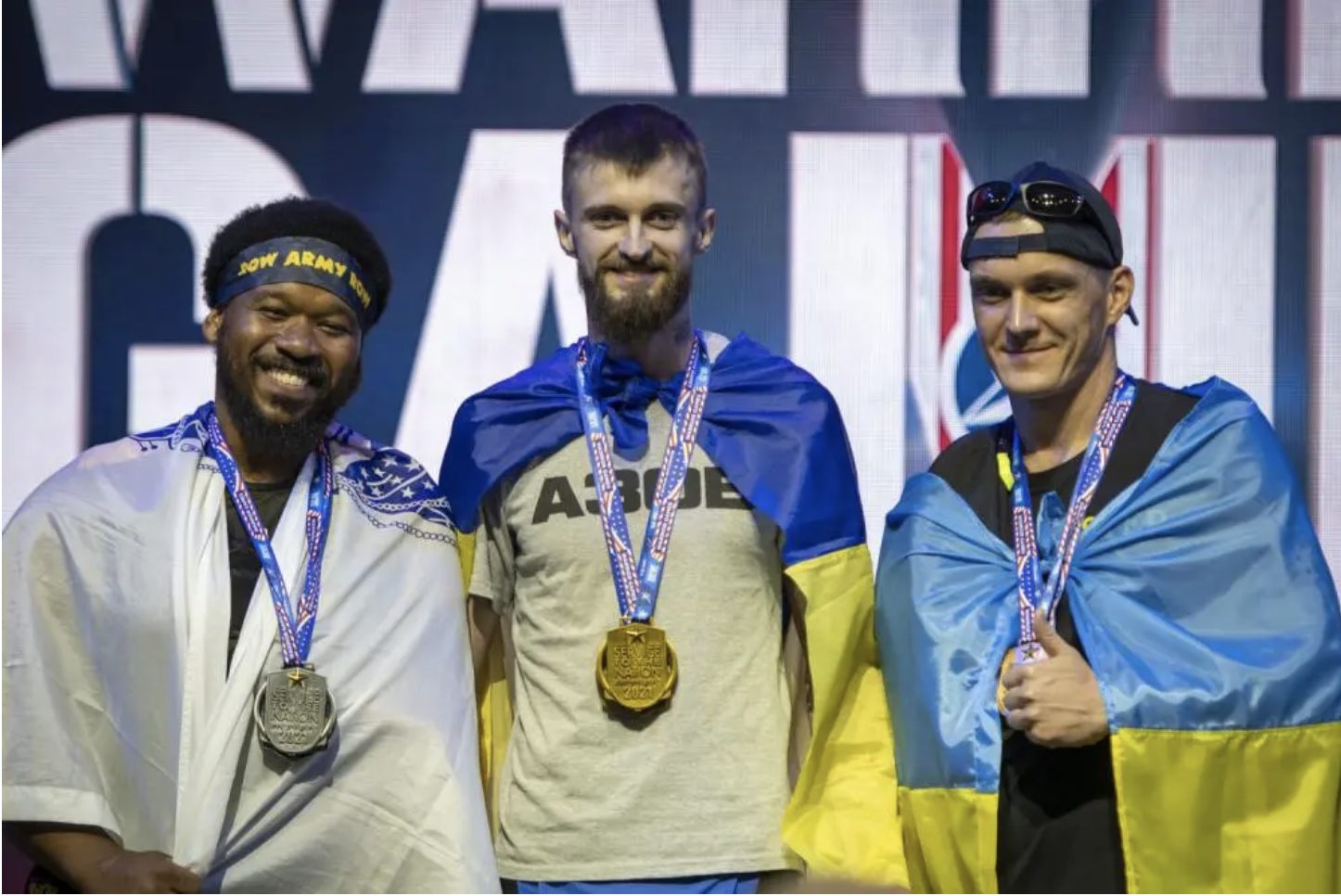 Halushka has never been shy about his ties to the Azov Battalion. During the Invictus Games this April, he whipped outan Azov flag as he accepted a gold medal, which was hosted in The Hague – where war criminals are normally tried, not awarded. Likewise, in Orlando, Haluskha wore an Azov Battalion t-shirt as he accepted a gold medal for indoor rowing. He was honored days later as the “heart” of his team.

“Symbol of Ukrainian bravery” was member of fascist Right Sector

Perhaps the most famous Ukrainian Warrior Games participant is Yulia Palevska, who the New York Times has dubbed“a symbol of Ukrainian bravery and self-sacrifice.”

Palevska gained international recognition this March when she handed off footage she had filmed in Mariupol to a journalist with the Associated Press. The video showed Palevska evacuating Azov Battalion soldiers from the Azovstal steel plant in Mariupol when she was captured by Russian forces. Three months later, she was released.

Palevska’s release by Russia was such a notable event in Ukraine that President Zelensky personally remarked on the development. 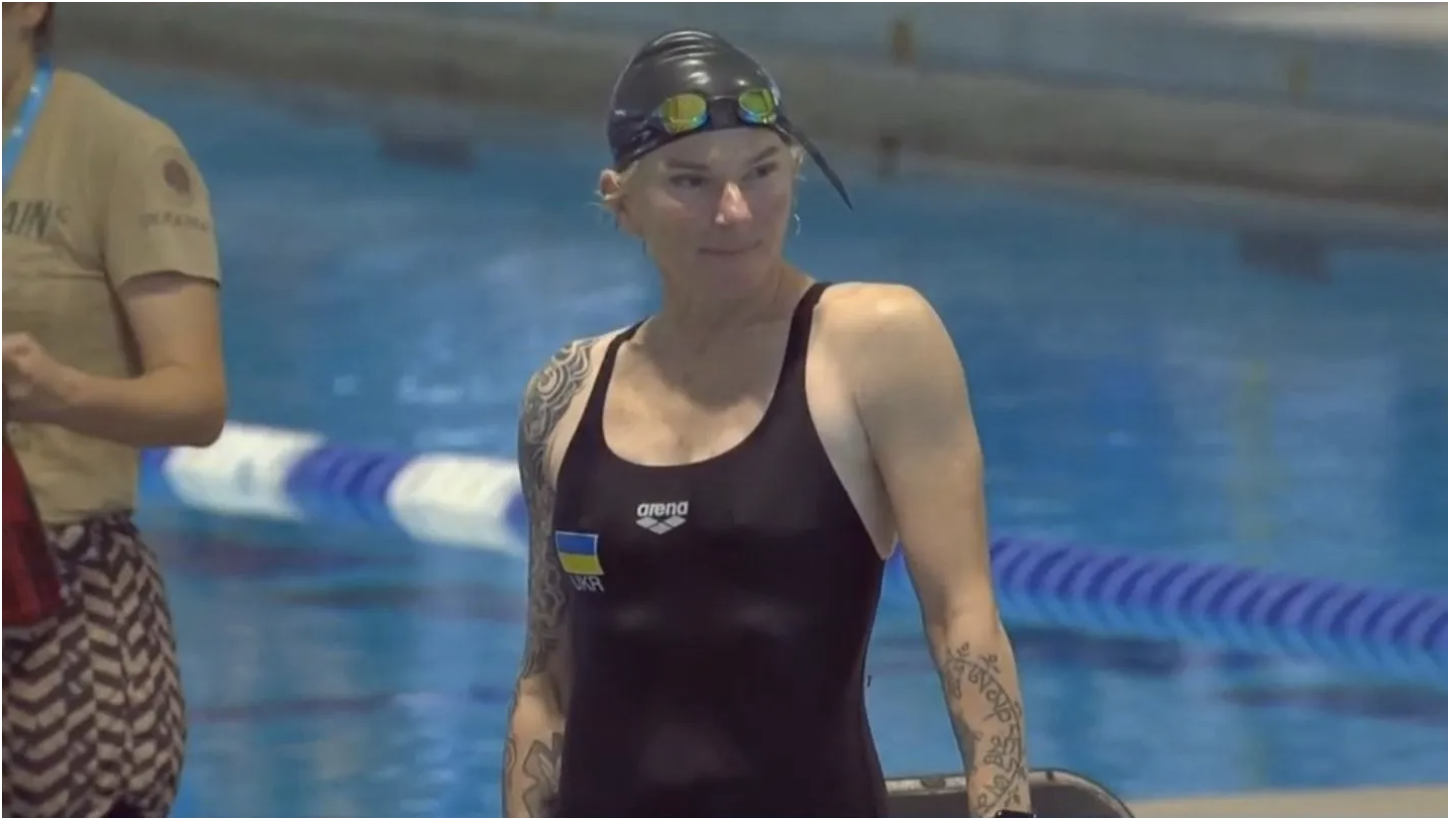 Palevska competes in a swimming competition at the DoD Warrior Games

The Associated Press downplayed her links to the Azov Battalion, writing “Russia has portrayed Taira as working for the nationalist Azov Battalion… But the AP found no such evidence, and friends and colleagues said she had no links to Azov.”

However, Palevska was a member of another neo-Nazi formation similarly incorporated into the Ukrainian military – a fact not mentioned by mainstream media outlets that vaulted her to war hero status this March.

A 2019 Bloomberg Businessweek report identified Palevska as “a former member of Right Sector,.” (“There’s no such thing as ex-Right Sector,” she claimed). After leaving the group “amid infighting,” she organized a team of combat medics named after her World of Warcraft character, “Taira’s Angels.”

Bloomberg’s correspondent met with Palevska in Mariupol, which was then controlled by the Azov Battalion. Palevska’s medic group “runs through about $20,000, half of it from abroad, in cash, fuel, and medical supplies every month,” he reported. 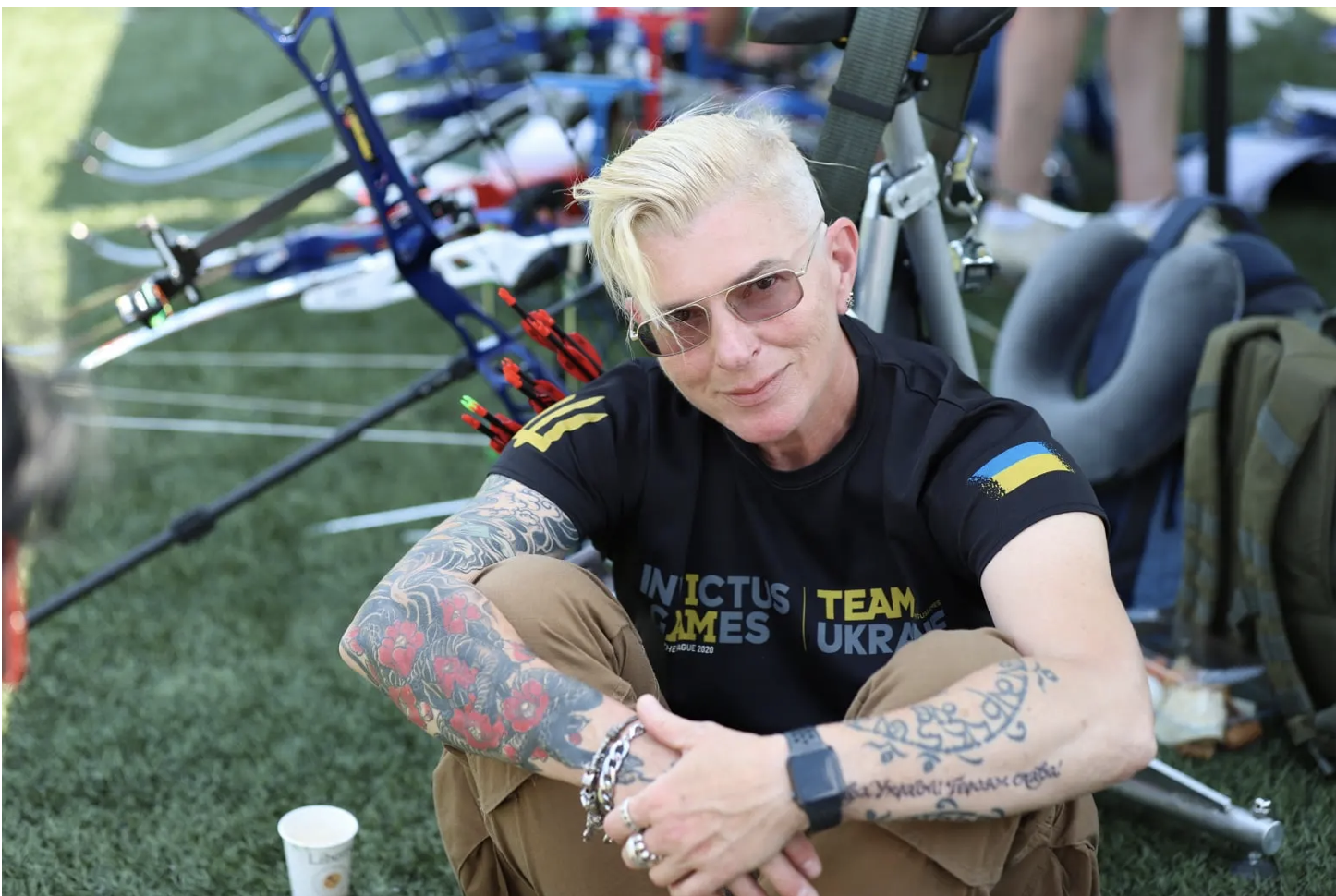 “Everyone I talk to describes [Palevska], dappled with Buddhist tattoos and sporting dyed blue hair, as motivated purely by patriotism,” he added.

In a photo posted by the official Facebook page for Ukrainian Warrior Games team, Palevska’s tattoo of the ultranationalist slogan “Glory to Ukraine, Glory to the Heroes” is clearly visible.

Another member of Palevska’s media group was “wearing a T-shirt from the neo-Nazi apparel company Sva Stone and an Iron Cross ring,” according to Bloomberg.

It is difficult to believe that Palevska and Halushka are the only members of Team Ukraine that have belonged to neo-Nazi groups. 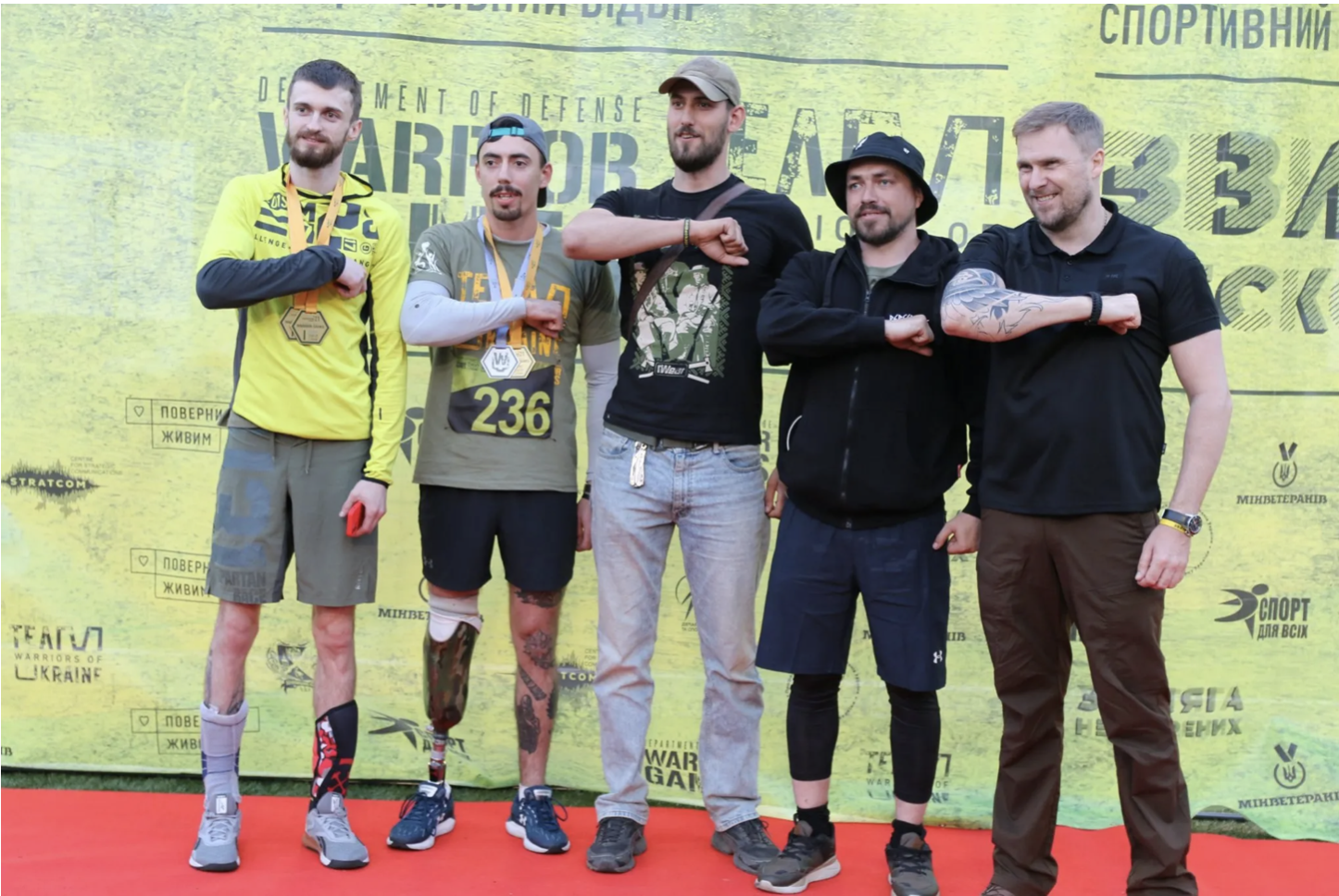 In other photos, a member of the team wearing a Warrior Games t-shirt can be seen holding a Right Sector flag.

American taxpayers have already forked more than $60 billion over to Ukraine since the war broke out in 2014. They are therefore entitled to know whether the Department of Defense paid Team Ukraine’s travel expenses.

Video from the Department of Defense shows the Ukrainian team deboarding on the tarmac at MacDill Air Force Base. Did they even pass through Customs?

The Pentagon’s Warrior Games has refused to answer these questions and stonewalled The Grayzone ever since.

While the presence of neo-Nazis within Ukraine’s fighting forces may come as little surprise to critical observers of NATO’s conflict with Russia, their invitation to Disney World by the Department of Defense is without a doubt one of the weirdest episodes in the Ukraine proxy war.

Watch: The Hill covers Alex Rubinstein’s report for The Grayzone

Chris Hedges: Monarchs Belong in the Dustbin of History

Escalate or Grind On? Russian Ops in Ukraine Update for September 14, 2022