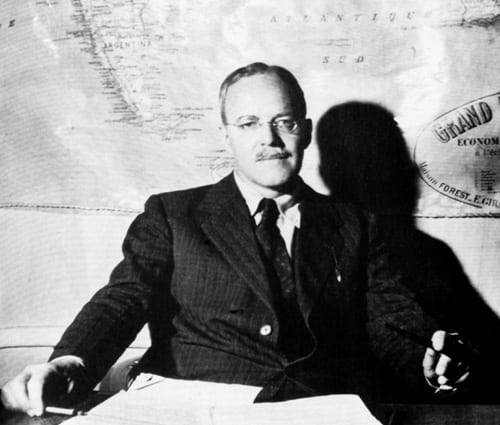 Allen Dulles, OSS, CIA—The template for the “gentlemen” scumbags who would save the world from the “communist menace.”

Lichtbau’s story concerns newly declassified documents showing that the CIA and FBI employed at least a thousand, and likely more, Nazis and Nazi-collaborators as spies and informants during the Cold War.

What’s striking about the story is the revelation that Allen Dulles, at the time head of the CIA, described Nazis on the US payroll as “moderates.”

It’s difficult to see how Nazis could be described as moderates. But maybe it depends on your politics. As Victor Kiernan pointed out in America: The New Imperialism, Dulles’ sister was so “overflowing with admiration for Nazism that she settled in Germany to bask in its rays.” Perhaps her brother felt the same—in which case, Nazis may indeed have genuinely appeared to the country’s chief spy to be moderates.

Among the “moderate” Nazis pressed into service by Dulles as spies, and by FBI director J. Edgar Hoover as informants, were:

• Ex-Nazi police officials and East European collaborators who, it is said, were manifestly guilty of war crimes.

• Otto von Bolschwing, a top aide to Adolf Eichmann, who wrote policy papers on how to terrorize Jews.

• Aleksandras Lileikis, a Lithuanian Nazi collaborator who the US Justice Department’s Nazi-hunting unit said “was a senior perpetrator of the Holocaust.”

Hoover dismissed accusations that his Nazi informants had committed wartime atrocities as Soviet propaganda. Syrian leader Bashar al-Assad’s accusations in 2011 that the uprising in his country was driven by militant Islamists with foreign backing was similarly dismissed by US officials as propaganda—until the weight of evidence intervened.

A NOTABLE CASE IN POINT : OSS EXECUTIVE ALLEN DULLES RESCUES THE GESTAPO CHIEF IN ITALY. Click on the bar below.

1945: ITALY. Nazi shyster and Hitler Project kingpin Allen Dulles, in his new job as Office of Strategic Services (OSS) operative, arranges for the OSS to rescue his good buddy, SS Obergruppenfuhrer Karl Wolff  (left), head of the Gestapo in Italy and SS head Heinrich Himmler’s right hand man, who has been captured by Italian partisans. Obergruppenfuhrer Wolff had been on his way to meet Dulles in Bern, Switzerland to negotiate the terms of Operation Sunrise under which thousands of Nazi war criminals and mass murderers will escape prosecution for war crimes and become employees of the government of the United States. SOURCE: Making the World Safe for Hypocrisy.[/learn_more]

Before Germany declared war on the United States, Washington didn’t think the Nazis were so bad. To the contrary, there was much the Nazis did that the intertwined US economic and political elites admired. Hitler’s forces shut down trade unions, banned leftist political parties, jailed communists, and sought to destroy the Soviet Union. After the war, Nazis were recruited to carry on in pursuit of the same goals, undermining the USSR and sabotaging socialism in eastern Europe.

Similarly, Washington didn’t think the violent Sunni Muslim fanatics who sought to overthrow the secular nationalist government of Bashar al-Assad were so bad when the point of their dagger was directed at the heart of the Syrian president. It was only when ISIS threatened to take control of Iraqi oil fields that they became a threat to be eliminated. At that point, the Islamic State’s commitment to a harsh 18-century Wahhabism-inspired Islam became intolerable, though only in the official rhetoric. The reality is otherwise. Wahhabism is the official ideology of Saudi Arabia, a family dictatorship Washington supports strongly. The beheading-practicing, anti-Shia, theological absolutist monarchy that presides over much of the Arabian Peninsula is sometimes described as “moderate” in Washington.

John Kerry conferring with the Saudi mafia. (click to expand)

Observers who closely follow events in Syria argue that the “moderate” Syrian rebels are a myth. In his latest book, The Jihadis Return: ISIS and the New Sunni Uprising, veteran Middle East correspondent Patrick Cockburn observes that there is “no dividing wall” between “America’s supposedly moderate opposition allies” and al-Qaeda-linked ISIS and al-Qaeda’s official franchise in Syria, the Nusra Front (with which the “moderate” rebels cooperate.) Others point out that almost all rebel groups in Syria are made up of violent Sunni Muslim fanatics whose aim is to replace Syria’s secular constitution with a Sunni Muslim interpretation of the Koran.

But, then, if, in the official rhetoric of Washington, Nazis are labelled as moderates when they’re useful in achieving US foreign policy goals, it should come as no surprise that misogynist, sectarian, head-chopping Sunni extremists whose aims intersect with the US foreign policy objective of ousting Assad’s government should be similarly sanitized as “moderates.”

In Washington, a group or country’s moderation has nothing to do with methods, and everything to do with aims. Nazism became unacceptable only when Germany declared war on the United States. Before that, and after Germany’s defeat, Nazism was okay. It opposed the Soviet Union and the left—a battle the US elite applauded.

Moderation is in the eye of the beholder—which speaks volumes about the politics of a state that labels Nazis and violent Sunni Muslim fundamentalists as moderates.

ALL QUIET IN THE WEST (A MEDITATION)