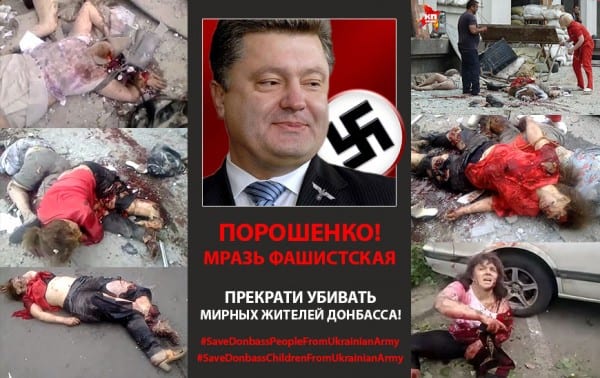 Novorossiya poster depicting Porochenko as a Fascist war criminal (which he is). 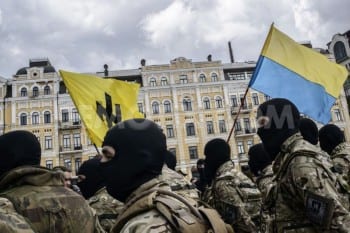 Kiev has mobilized its own fascist militias and mercenaries to fight what it still calls “terrorists” and “separatists”, many paid by the US and the native oligarchs. Here members of the notorious Azov Battalion. These units, along with regular Ukrainian army elements, have already committed outrageous atrocities. 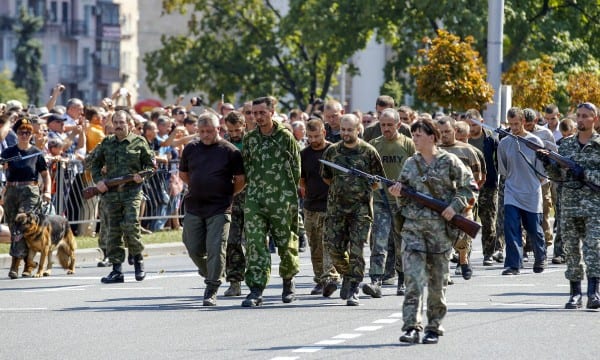 Kiev’s legions being paraded through Donetsk’s main thoroughfares, bowed heads in humiliation. The POWS received humane treatment despite their participation in heinous crimes.

“During a week-long investigation in eastern Ukraine, Human Rights Watch documented widespread use of cluster munitions in fighting between government forces and pro-Russian rebels in more than a dozen urban and rural locations.”

DISPATCHES ON THE NOVOROSSIYAN CIVIL WAR

“This is one more alarming sign that deserves most serious attention,” he stressed. (F)urther evidence of the real nature of a punitive Kiev operation that has deliberately claimed many civilians’ lives.”

“We proceed from the unchanged position that we will be backed not only by inter-governmental organisations such as the United Nations, the Organisation for Security and Co-operation in Europe and the Council of Europe, but also by human rights activists that thorough investigation of crimes against civilians and violations of supremacy of law principles is needed, with punishment for the guilty.” 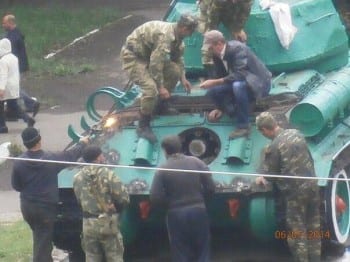 NAF fighters work to restore T-34 for combat against Kiev. 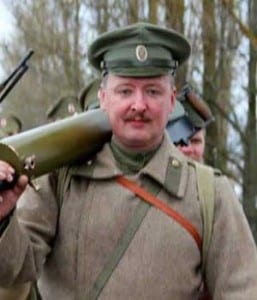 Chances for durable peace are virtually zero. Full-scale conflict could resume any time. With full US support and encouragement.

“(H)ighlighting the urgent need to take steps to prevent the civilian suffering they cause.”

Urging the (a)dopt(ion) (of a) broader, effects-based definition of incendiary weapons that encompasses multipurpose munitions with incendiary effects, such as those containing white phosphorus.”

“Prohibiting the use of all incendiary weapons in civilian areas, regardless of whether they are air dropped or surface launched.”

“Incendiary weapons produce heat and fire through the chemical reaction of a flammable substance,” said HRW. Designed to burn people or material. Some penetrate plate metal. Others produce smokescreens or provide illumination. Causing “exceptionally painful thermal and respiratory burns, which can lead to complications such as shock, infection, and asphyxiation,” said HRW. “Victims who survive their wounds often suffer long-term physical and psychological damage.” 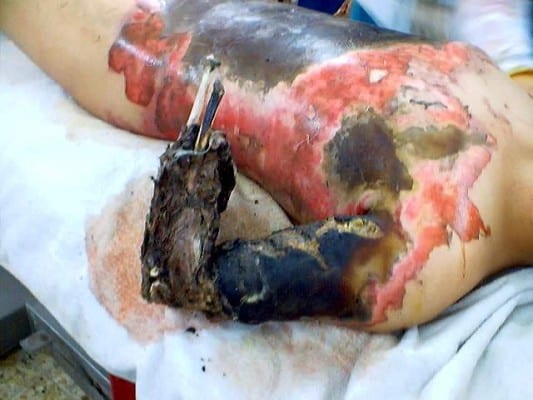 An example of incendiary bomb wounds.

Spanish supporter of Novorossiya’s struggle against Kiev. His desire is to fight Fascism and aid the Donbass people. Other fighters from all over Europe have also come to defend the new republics.

Self-defense forces “clear(ed) unexploded ordnance…white phosphorus rounds in the course of its work cleaning up an area that had been a battlefield. An outright prohibition on the use of incendiary weapons would offer the strongest protection for civilians and soldiers alike.” Their harmful effects are horrific. Devastating. Demanding user countries be held fully accountable.
“(E)ssential to minimiz(e) the suffering from such indiscriminate and exceptionally cruel weapons,” said HRW. 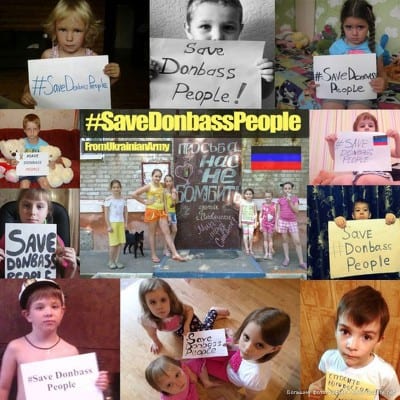 The Donbass people have mounted a publicity campaign to alert the world to the Kiev/NATO organized atrocities. Help by distributing their materials.

On November 8, Sergey Lavrov commented on Ukraine. Following his meeting with John Kerry. 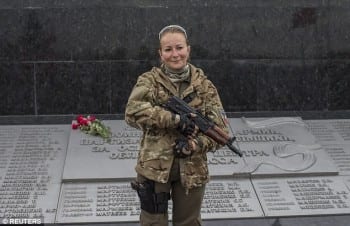 A female fighter in Novorossiya’s people’s army. The new republics are an example for all of humanity.

“Russia and the United States have different views on developments in Ukraine and their causes,” he said. “(F)or obvious reasons,” he added.

“(I)f Washington showed interest in promoting conciliation and creating conditions for dialogue between Kiev and the leaders of the Lugansk and Donetsk people’s republics, it would be a step in the right direction.”

“The main thing that should be avoided is condoning some ideas voiced in Kiev, in particular on building up military strength before resuming hostilities to resolve the crisis.”

“On the contrary, we should discourage the more extreme parties who entertain these ideas and instead convince the Kiev authorities to honour their obligations, in particular, on a political settlement of the crisis.”

“For its part, Russia will do its best in relations with the self-defence forces and Kiev to ensure that this comes about.”

From November 8 through November 17. Testing “NATO’s ability to coordinate and execute a NATO-led Article 5 Collective Defence operation in a multinational environment.”  Certifying “the 15th rotation of the NATO Response Force (NRF) under high-intensity, war fighting conditions.” Provocatively targeting Russia. One of many examples of risked East/West confrontation. 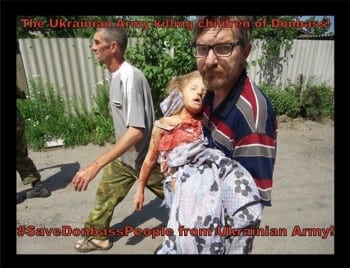 “Save the Donbass people from the Ukrainian army!”  It’s a simple and just demand.
CLICK TO EXPAND IMAGE 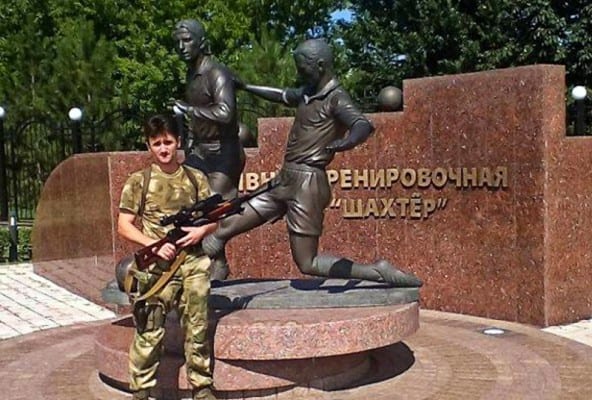 America’s land and sea-based strategic bombers, land-based missiles, and ballistic missile submarines target potential  threats. None exist. America’s only enemies are ones it invents. To advance its imperium. Risking the unthinkable.

Stopping its killing machine matters most. Survival depends on it.

(1) Donbas Battalion, (Ukrainian: Батальйон “Донбас”), is a volunteered National Guard of Ukraine unit subordinate to the Ministry of Internal Affairs of Ukraine, based inDniepropetrovsk. The formation was established in the Spring of 2014 during the 2014 pro-Russian conflict in Ukraine.[2][3][4] The battalion was created by Semen Semenchenko,claimed to be an ethnic Russian native of Donetsk, who is a major in theNational Guard of Ukraine.[5]

Semenchenko, a former Ukrainian reserve captain, claims that he and the other members of the Donbas Battalion gained combat experience in the Ukrainian Ground Forces or Soviet Army.[5] According to him the all-volunteer Battalion was initially funded wholly by their own members savings and donations from individuals and “receiving zero salary from either the state or oligarchs“.[5] The Ukrainian Interior Ministry adopted Donbas Battalion as a National Guard of Ukraine unit thus allowing them to operate legally.[5]

The Battalion recruits members from different regions of Ukraine, through various media including the Internet, a newspaper and phone line. New recruits are briefly trained in Dnipropetrovsk Oblast, and may see combat days after joining.

According to Semenchenko, some of his men have entered Donetsk city. Donbass Battalion and the other territorial battalion fight on the ground with an artillery and logistic support from the Ukrainian army.[6]

NATO  1949: The origin of an offensive, expansionist, imperialist military alliance.

Stephen Lendman does a good job of documenting the horrific war crimes of the Kiev junta. I would like to expand a little on the first image in his article, “Novorossiya poster depicting Porochenko as a Fascist war criminal (which he is).” At least three of the panels show a woman with a red blouse and black pants. This is Inna Kukurudza, a completely innocent civilian victim, a social worker, killed in front of the building where she worked in Lugansk by rockets fired from a Kiev junta fighter jet. This, of course is but one example of thousands of… Read more »