Obama’s new Attorney General Loretta Lynch has had one hell of a start to her new gig. There was the sweetheart deal with the big banks over the FOREX currency market rigging, the politically motivated international bust of several FIFA officials as cover for revoking the 2018 World Cup from Russia and now the escalation of the police state…” 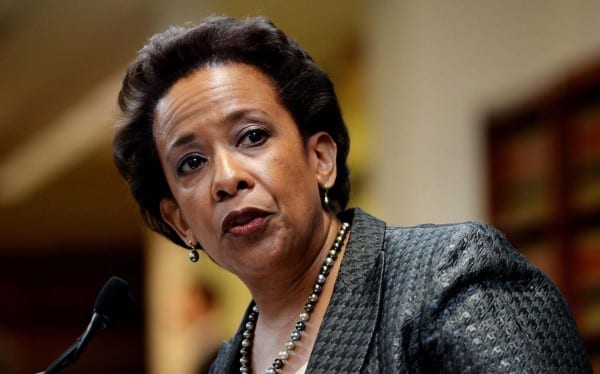 USAG L. Lynch: Her zealousness a sign she’s raring to prove her worth to the empire managers.

The Obama regime has been waging a war on investigative reporters and whistleblowers for years. Now that war is about to open a new front against those on internet message boards and social media. The DOJ has just hit Reason magazine with a subpoena demanding the personal information of anonymous posters who made “threats” against the judge who sent Silk Road founder Ross Ulbricht to prison for life.

Last week’s Supreme Court ruling in the case of Elonis v. United States was trumpeted as a sign that freedom of speech was still truly alive in America. The ruling reversed the conviction of Anthony Elonis who – fancied himself as a rapper – over alleged threats made on Facebook in the form of rap lyrics. Mr. Elonis found himself in serious trouble with the law after posting violent language about his ex-wife and musing about school shootings. For his transgressions he earned a visit from the FBI as well as a nearly four year sentence in a federal prison which SCOTUS overruled on the basis of freedom of speech.

While Elonis’s postings were indeed crude and distasteful — just like millions of others on the internet — he found himself caught up in a battle with Leviathan and won. But the civil libertarians taking a victory lap and the snarky fascists claiming that America was still “free” missed a very important aspect of the case. Elonis was convicted for implied threats against an individual and not the rogue government and its agents. Now it is apparent that the Obama regime’s relentless drive to gut the U.S. Constitution is ongoing, note the immediate DOJ appeal to continue NSA phone surveillance after the passage of the Freedom Act.

Few things are more cynical and repulsive than to use African Americans to do the dirtiest work of the empire…This has now been happening with increasing frequency, starting with Colin Powell and Condi Rice and culminating in the election of Obama. Lynch is just the latest addition to a lengthening ignoble list. —Eds.

The Loretta Lynch led Justice Department has issued a subpoena to libertarian magazine Reason demanding the personal information of several posters on the website message board. The comments could only loosely be seen as ‘serious’ threats towards the federal judge who sent the founder of Dark Web marketplace Silk Road to the hole for life.

As reported by the popular website Buzzfeed in the story “Justice Department Subpoenas Reason.com To Unmask Commenters”:

The Justice Department has issued a federal grand jury subpoena to Reason, a prominent libertarian publication, to unmask the identity of commenters who made alleged threats against a federal judge.

In the June 2 subpoena, first published by the blog Popehat on Monday, the Justice Department orders Reason to provide a federal grand jury with “any and all identifying information” on the identities of commenters who mused about shooting federal judges and/or feeding them through a wood chipper.

A May 31 article on Reason’s blog about the prosecution of Silk Road founder Ross “Dread Pirate Roberts” Ulbricht spurred the anonymous commenters’ vitriol. Ulbricht pleaded for leniency, but a federal judge sentenced Ulbricht to life in prison without parole for setting up the illicit online drug market.

“It’s judges like these that should be taken out back and shot,” one Reason commenter wrote.

“It’s judges like these that will be taken out back and shot,” another responded.

“Why waste ammunition? Wood chippers get the message across clearly,” a third wrote. “Especially if you feed them in feet first.”

Another comment suggested shooting such judges on courthouse steps instead.

Other comments flagged by the Justice Department were less violent, such as one that wished for “a special place in hell reserved for that horrible woman.”

In the subpoena, the Justice Department says it is seeking evidence regarding possible violations of federal laws against interstate threats.

The subpoena raises several First Amendment issues, such as whether the comments rise to the level of a “true threat” or are protected free speech. The Supreme Court recently ruled that “true threats” must be made with some knowledge or intent that the threat will be taken seriously.

Kimberly Chow, an attorney for the Reporters Committee for Freedom of the Press, said the comments on Reason clearly fall within the internet’s regular, if outrageous and often vile, discourse.

“In terms of the comments, everybody knows the internet is a forum where exaggeration and hyperbole take place,” Chow told BuzzFeed News. “These comments are in that category. Nobody believes that these people are going to go and put this judge in a wood chipper.”

Free speech advocates also worry that such subpoenas burden websites with significant legal costs and could have a chilling effect on speech. The subpoena also has specific implications for anonymous speech.

Granted that the comments were tasteless – unnecessarily so at that – but it sends an ominous message to others who engage in anonymous discourse on the internet — Big Brother is watching you and will bring the hammer down. Obama and his fascist Justice Department have been running wild in waging a war on journalists and whistleblowers, invoking the World War I era Espionage Act to stifle government critics. The Reason subpoena – which should be getting far more coverage than it has to this point – is also an indicator that the mass surveillance of the American public isn’t limited to the bulk collection of telephone data, that has always been somewhat of a red herring. The feds and their contractors are collecting all of our online communications, searches, texts and medical and financial data as well.

Whatever one may think of the online bazaar Silk Road and those who frequented it for sexual action, sick pornography, drugs, weaponry and other nefarious reasons, the chatter by a few nitwits in a comments section about the judge in the case is at least theoretically free speech. So much for that great ruling for Elonis over his Facebook postings because he is just a small fish in the pond whose offenses didn’t rise to the level of daring to criticize the corrupt government in Obamastan.

Obama’s new Attorney General Loretta Lynch has had one hell of a start to her new gig. There was the sweetheart deal with the big banks over the FOREX currency market rigging, the politically motivated international bust of several FIFA officials as cover for revoking the 2018 World Cup from Russia and now the escalation of the police state. The pissing contest over Lynch’s confirmation provided a nice racially tinged cover for the fact that she is yet another establishment insider, a fox tasked with guarding the hen house. Her service on the board of the New York Federal Reserve while Timothy Geithner was heading it was a dead giveaway.

Lynch is a very dangerous woman and she is just getting warmed up right now, keep that in mind when you are making your comments folks.

Donn Marten is a free lance writer and consultant who resides in West Central Florida. [/box]

My Personal Libertarian Hell: How I Enraged the Movement and Paid the Price