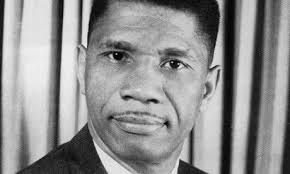 Evers: Like Malcolm and Dr. King, he defined real courage and what the good fight is all about.

This is what liberaloids like MSNBC’s Rachel Maddow are good for: they can come up with pretty nice information packages on matters that do not really threaten the status quo in social relations. Or matters whose adverse impact has long been absorbed and co-opted by the establishment. As our readers know, MSNBC, along with the Daily Kos, are literally appendages of the Democratic party, and as such, useless in terms of in-depth, out-of-the-bubble crusading journalism. MSNBC, in fact, is US television’s main barn for the medium’s Obamabots, which means that no real criticism of Barack Obama is ever permitted. This is too bad, not only because the mass American public, devoid of substantive information, on which so much depends, continues its long descent into confusion and political suicide. As this excellent segment on Megdar Evers proves, a genuine hero whose name should be a household name across the country, Maddow and her ilk can report clearly when they can, but much too often, they won’t—P. Greanville

Visit NBCNews.com for breaking news, world news, and news about the economy